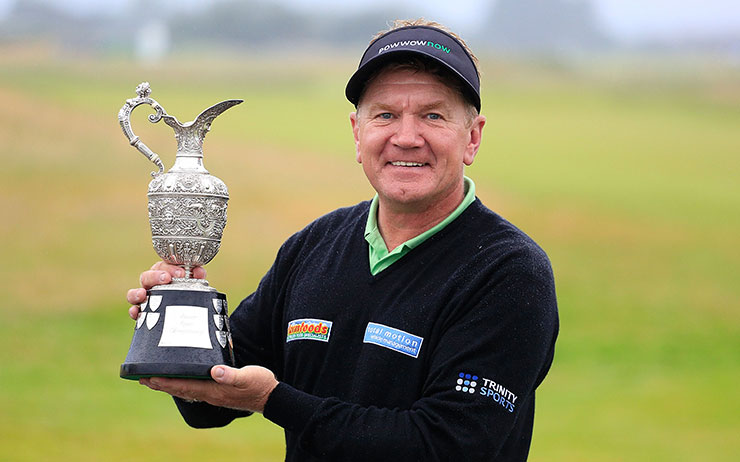 The 51-year-old Englishman will be joined by three other Ryder Cup blasts from the past – Mark James, Ronan Rafferty and Barry Lane – at the European Senior Tour event at Sharjah Golf and Shooting Club from March 16-18.

“I am greatly looking forward to starting my defence of the John Jacobs Trophy [order of merit title] in Sharjah in March,” said Broadhurst who won his first senior major at Carnoustie in July by two shots from American Scott McCarron before going on to capture the US Champion Tour’s Pure Insurance Championship in September.

“I have always enjoyed playing in the United Arab Emirates, and it’s great that the Senior Tour golfers now have a chance to return to a country where a number of us will have very fond memories.”

Broadhurst, who finished second at the Wales Senior Open, WINSTONgolf Senior Open and the season-ending MCB Tour Championship and had two other two 10s, easily captured the the 2016 order of merit title with €399, 285 from nine events. Swede Magnus P Atlevi, tied third with Miguel Angel Jimenez at Carnoustie, was second with €211,557 to tie up rookie of the year honours.

Atlevi will also tee it up in Sharjah which is one of five European Tour events scheduled for the UAE in 2017 alongside the this month’s main tour Abu Dhabi HSBC Golf Championship, February’s Tiger Woods-headlined Omega Dubai Desert Classic, November’s DP World Tour Championship and the Challenge Tour’s Ras-Al Khaimah Golf Challenge in October.

It’s the first Senior Tour event in the region since 2000 but a first professional tournament for Sharjah and the emirate’s Peter Harradine-designed nine-hole course.

Northern Ireland’s Rafferty, winner of the European Tour Order of Merit in 1989, will go in search of a maiden Senior Tour title, adding to the seven he won on main tour between 1989 and 1993.

Lane will land in Sharjah fresh from winning the MCB Tour Championship.