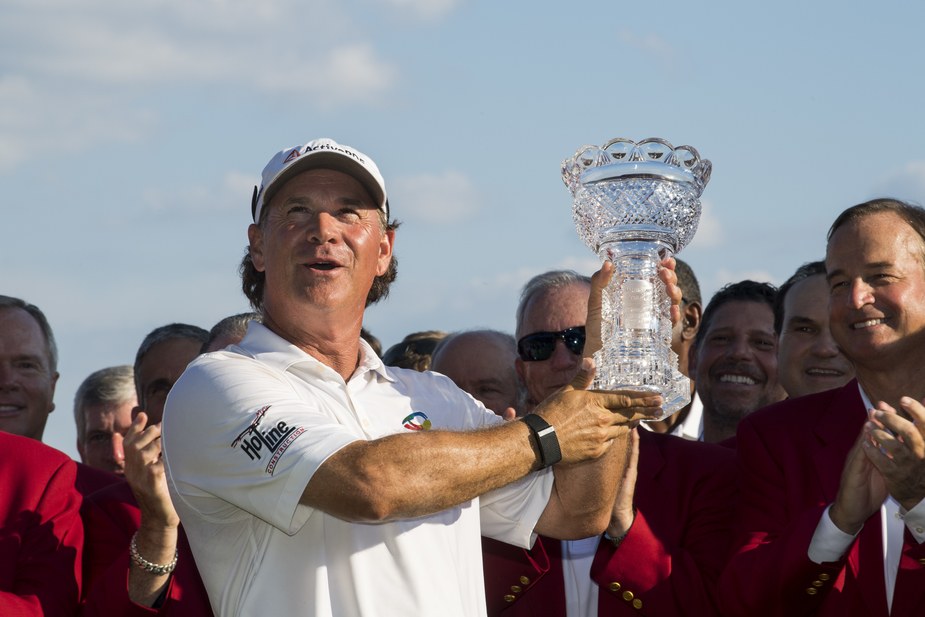 The PGA Tour Champions, in the absence of the legends who initially gave it its cachet, doesn’t usually garner consideration on a crowded golf stage. Bernhard Langer has been its exception.

Those who defy age tend to warrant attention. The lines in Langer’s face might give away his impending 60th birthday, but his golf has not reflected it, at least until a different wrinkle breached his dominance on Sunday.

Langer was closing on a fourth straight victory in the Constellation Senior Players Championship, two pars away from claiming a third major championship this year alone, when inexplicably he imploded and handed victory to Scott McCarron.

Give credit to McCarron, at least, for putting himself into position to cash in in the unlikely event that Langer wobbled. McCarron shot a bogey-free round of six-under par 66 at Caves Valley Golf Club in Baltimore to finish at 18-under par 270.

It would have been one shot too many had Langer closed in a manner expected of a World Golf Hall of Famer with 32 victories on the PGA Tour seniors.

Instead, Langer, with a 5-iron, blocked his tee shot at the par-3 17th hole when the center of the green was his target, given his lead. His ball did not carry a pond protecting the left side of the green, leading to a double-bogey five that turned his lead into a one-shot deficit.

On the par-4 18th hole, Langer hit an exceptional second shot to 10 feet, but lipped out the birdie putt to tie to force a playoff, allowing McCarron to claim his first major championship, his fourth senior victory and his second of the year.

“It’s tough to put this into words,” McCarron said. “I’ve been working so hard. We’ve had a little bit of negative press over the last week, and to overcome all that, Langer and myself, to come out of here with a win and us battling down to the end is just fantastic. To win my first major out here on the Champions Tour, it just feels so good.”

McCarron was referring to a kerfuffle that developed as to whether he and Langer, both of whom use long petters that they once anchored to their chests with their left hand, were violating the integrity of a new rule that disallows doing so.

Each issued statements defending themselves, while the United States Golf Association, the ultimate arbiter of the rules, also said in a statement that it had “seen no evidence of a player breaching the Rule.”

So the final round was void of controversy, but not of surprise, the latter being that Langer failed to make a birdie after the fifth hole and played the back nine in three-over par 39. His score of 73 was the highest of any player among the top nine finishers.

For McCarron, meanwhile, it was an emotional victory beyond the fact it was his first major championship. He did it without his usual caddie by his side.

“My caddie, Rich Mayo, his father passed away on Wednesday, Bud man,” McCarron said, fighting back tears. “Bud, this one’s for you. He used to love to watch Rich and I.”