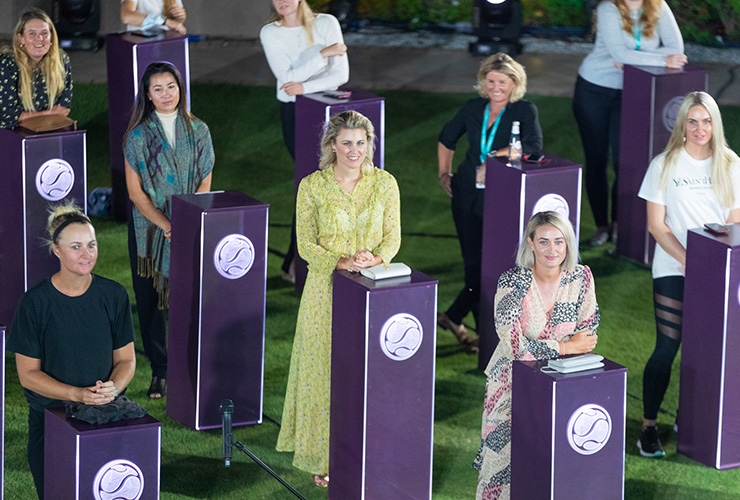 Captain’s get ready to make their draft picks ahead of the seriously fun Saudi Ladies Team International.

By Kent Gray
If you see an LET star having a little mid-round boogie or reaching for an ice-cream instead of a club over the next few days, do not adjust your television set. Welcome, ladies and gentlemen, to the Saudi Ladies Team International, serious tournament golf but not as we know it.

Thirty-six teams set out early Tuesday in a 54-hole, $500,000 teams event officially sanctioned by the LET. Teams will arrive on the first tee to their own choice of entrance music and tunes will be piped around Royal Greens Golf & Country Club in King Abdullah Economic City. ‘Quiet Please’ signs? So yesterday.

It is a serious tournament, though not a word that Golf Saudi want used as a challenging year winds down. 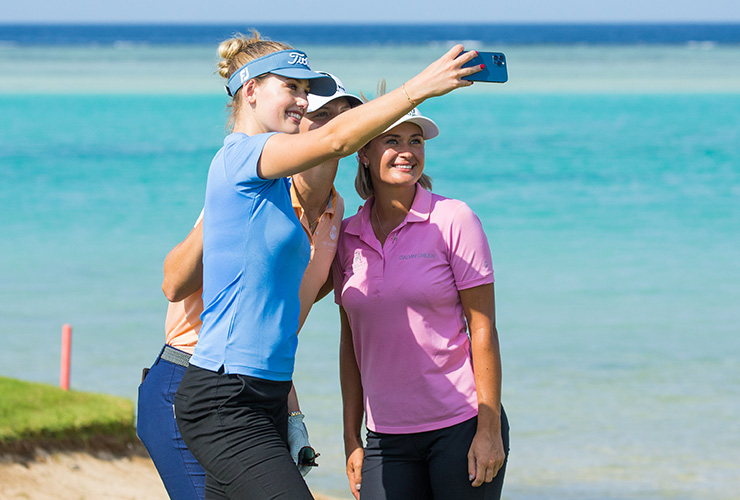 “Everyone has experienced first-hand the impact of COVID-19 in 2020,” said Golf Saudi CEO, Majed Al Sorour. “Women’s golf has been no different, with many events cancelled over the course of the year.

“We see the Saudi Ladies Team International as the perfect antidote to that. It’s a fun, exciting, innovative format that celebrates the women’s game, supports women’s golf and we hope offers the players a fun conclusion to a stop-start, sometimes difficult year.”

The teams were decided using an ‘NFL-style’ draft system that saw each captain pick their first player before being randomly allocated a third professional teammate and a competing amateur, largely made up of event sponsors and partners.

Some of the stand-out picks include Amy Boulden selecting fellow Welsh star Chloe Williams which is all rather cosy as Chloe’s dad, Paul, doubles as Amy’s coach. Boulden did, however, admit that she had been left somewhat irked by England’s Florentyna Parker stealing her first choice pick, best pal Kelsey Macdonald of Scotland, earlier in the round – something bound to add extra spice to the event.

Hull, who finished sixth in the weekend’s Saudi Ladies International, said: “I played with Alison last week and I thought she was pretty good. I played with her in Scotland in a practice round too and she was really nice, so it was an easy choice.

“It will feel different playing in a team event rather than as single players. It will be fun and help us relax a bit more. I’m looking forward to it.”

Muirhead added: “I’m really looking forward to the Saudi Ladies Team International, especially as I’ve got Charley in my team. I’m really excited to get started and feel we could do something as a team. We both have the game to do it and it’ll just be a matter of rolling in the putts and avoiding the bogeys.

“Playing as a team will be different because we’ll probably get off on each other’s energy, especially if you’re playing well and your playing partners are playing well.”

Morgane Metraux flew round Royal Greens with nine birdies on Sunday, en route to a final round 67 that would secure her 10th spot in the SLI. That form and her swing caught the attention of Georgia Hall, the runner-up of the Aramco Saudi Ladies International presented by PIF. This partnership puts her in good stead for another strong showing this week.

“I’ve got a really good team so I’m looking forward to Tuesday. Georgia Hall picked me and we’re with Natasha Fear as well,” said Metraux.

“It’s really cool to have a different format like this where we’re also going to compete for an individual prize. To be playing in a team where you’re all counting towards the same score will mean we’re all pulling for each other, which will be different and a really fun atmosphere.”

And a fun atmosphere it promises to be. The rounds will be played with live music echoing across the course and, akin to WWE wrestling, teams will arrive on the first tee to their own choice of entrance music. Team Charley Hull have chosen ‘Eye of the Tiger’, while die-hard Liverpool FC fan Dame Laura Davies will bring a little bit of Anfield to Saudi with club anthem ‘You’ll Never Walk Alone’.

Each team will play three rounds, where their two lowest scores per hole are carded – with amateurs receiving ¾ of their official playing handicap.  The team with the lowest total score after all three days will be declared champions and will see its three professionals take home a winning share of the $300,000 prize fund. The lowest scoring professional across the three days – who may well come from a losing team – will themselves be rewarded with a share of the $200,000 individual prize fund.