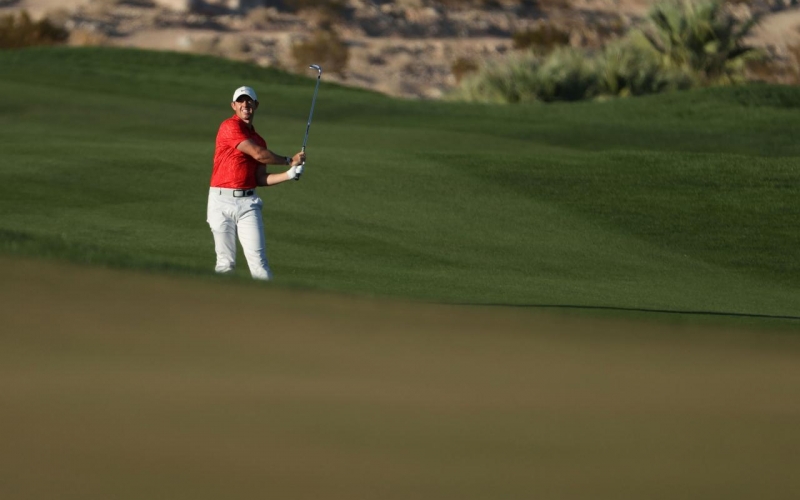 By Shane Ryan
If you’re a recreational golfer, especially one who likes to spend time on the range, you’ve likely had this experience at some point: A single swing thought clicks into place and you start hitting the ball very well—and very consistently. Your confidence grows with the success, and after another dozen great shots, it becomes irresistible to add a little something—a new move, more speed, anything. It even works, at first, and a good thing becomes even better. Then, slowly and subtly, you start to lose it. The thing you added spirals out of your control, and you’re not sure exactly how to fix it. The shots get worse, and perhaps unconsciously, in ways you won’t realise until later, you lean into the new thing rather than losing it, which only makes things worse. By the time your bucket of balls runs out, you’re a sweaty, angry mess, and those perfect moments from just minutes earlier are a distant memory. It’s only later, with clarity, that you are able to revert back to the original thought and rediscover your form for next time.

If that sounds familiar, you’ve experienced in microcosm, and in metaphor, what many professional golfers endure over a period of years. The beats are all the same: the initial success, honed in whatever unique style they possess, that gets them to the top of the sport. This is often followed by the nagging desire to constantly tweak and improve, which leads to a departure from what worked in the first place, which leads to the golfing wilderness and the blind struggle to escape, which leads to a thousand false solutions, which is finally resolved—if it’s resolved at all—only by returning to the “true self” that propelled them to the heights in the first place.

Rory McIlroy, who has never given a dull interview, hit this theme hard after his victory Sunday the CJ Cup.

“I feel like the last couple weeks I’ve realised that just being me is good enough,” McIlroy said, “and maybe the last few months I was trying … not trying to be someone else, but maybe trying to add things to my game or take things away from my game. I know that when I do the things that I do well, this is what I’m capable of. … That starts with being creative and being visual and maybe sort of sifting through the technical thoughts and not maybe being as technical with it. … Sometimes I forgot that in a quest to try to be too perfect probably, but this week was a great reminder that you don’t need to be perfect to be a great golfer.”

As far as epiphanies go, it may sound basic, but in a game like golf that is so fickle even for the best players, where the default strategy is to master the technical side of the game in an attempt to reduce and control the chaos that constantly threatens, it seems to have struck him as especially profound. The idea that he’s good enough to trust himself, to simply visualise what he wants to do and then execute, seems to have run contrary to how he was operating before, and the effect on his psyche—you can feel it from afar—is liberating. Two weeks ago, he was ready to give up golf for the year in frustration. Now he’s a champion again.

He’s not alone in experiencing this trajectory, though each player’s epiphany looks a bit different. Coming up on the PGA Tour, Steve Stricker was the constant victim of an inferiority complex and impostor syndrome. As a northerner from a small town, he naggingly felt like he didn’t belong, even as his game proved otherwise. It took him a longer time than it should have to make the tour, and after he achieved some initial success with two wins in 1996, his confidence was rattled to the core the first time he played with Tiger Woods. 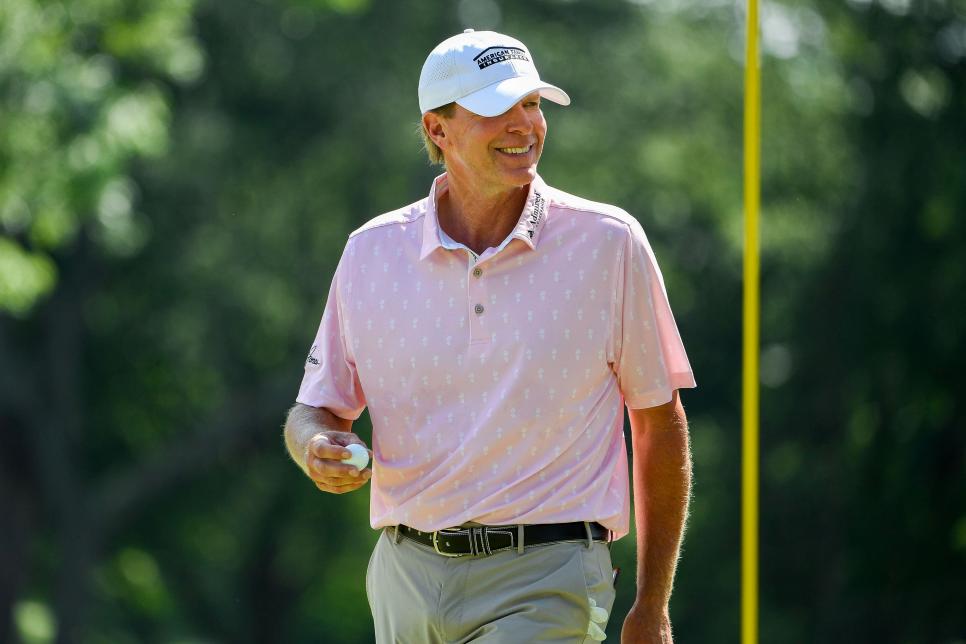 Tracy Wilcox
Steve Stricker suffered an imposter syndrome at the start of his career, fearing others would “see” his game wasn’t good enough to be on the PGA Tour.

Like McIlroy, Stricker saw his game suffer, though he fell to greater depths and for a much longer time, even losing his tour card in the process. Doubt plagued him, the work he had put in to get to that point felt “meaningless” and the path back to the top was unclear. In Stricker’s case, chasing distance was one of his unwise deviations, but the overarching theme was the same.

“I realised that I was exerting too much of my time and energy trying to play golf like someone who I wasn’t,” he wrote.

Stricker had his own epiphany, returned to a former style of play (and perhaps of being), found happiness and entered the golden age of his career in the late 2000s, winning nine events in five years and rising as high as No. 2 in the world.

“My advice to young golfers may be cliché,” he wrote, “but it’s still incredibly important: Don’t try to fix something that isn’t broken. Golfers on the PGA Tour are at the highest level because they’ve stayed true to their game.”

And they fall off the top, to hear them tell it, because they fail to stay true. Brendon Todd doesn’t just have one of the tour’s greatest comebacks to his name—he has two of them. Twice, he fell so low in the World Ranking that he was considering taking another job, and as recently as 2018 he had plans to meet with a financial adviser to talk about starting a fast-food franchise. When he lost his game, he really lost it, and like so many before him, he chased solutions anywhere. What changed things, finally, was a coach named Bradley Hughes whose task at its simplest was to return him to “normal,” and let the brilliant parts of his game shine.

The same is true for Harris English. A former Georgia Bulldog like Todd, English is a recent member of the victorious U.S. Ryder Cup team and one of the best players in the sport. Only a few years ago, however, he’d fallen to 149th in the world after a promising start to his career, before making his own comeback journey. When asked to explain what changed, he credited his coach and, time and again throughout the year, returned to the explanation of “going back to what I did well.” 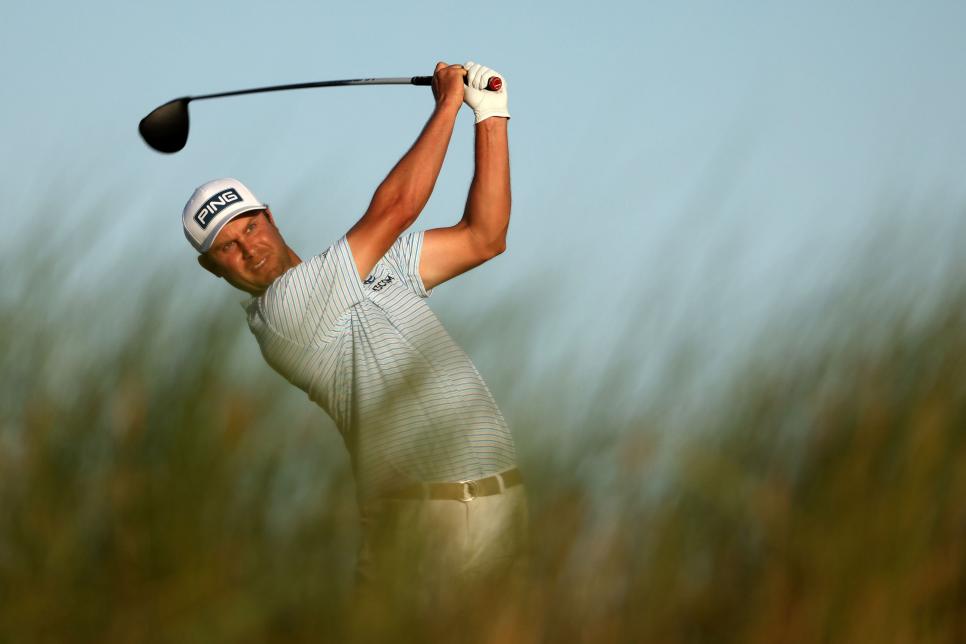 Jamie Squire
Harris English went from promising star out of college to struggling pro before ‘going back to what I did well.’

It seems so easy, when you hear players like these say the words, but it’s plainly so hard. The phrase “know thyself” comes to us from ancient Greece and is so well-travelled at this point that it may be the ultimate platitude. But as we see from players like McIlroy and Stricker and Todd and English and countless others, it may be the most important philosophical principle in professional golf.

Having started with a scenario the recreational golfer can relate to, let’s end with another: Have you ever given up the game for a while, either by choice or by necessity, and then returning after weeks or months or even years away? If so, you may have experienced another common phenomenon in your first time back, in which you prepare yourself to struggle, you expect to struggle, and you resign yourself to months of work to recapture your form … only to play far better than you could have dreamed.

It’s hard to know why this happens, but maybe it’s as simple as forgetting the accumulations of unwieldy knowledge that bogged you down and returning to a purer form of play that on some level, your body and mind can execute intuitively. For so many PGA Tour players, the process to regaining the lost heights is exactly the same—it takes years, but it’s no more complicated than rediscovering the truth, as players and as people, of who they really are.