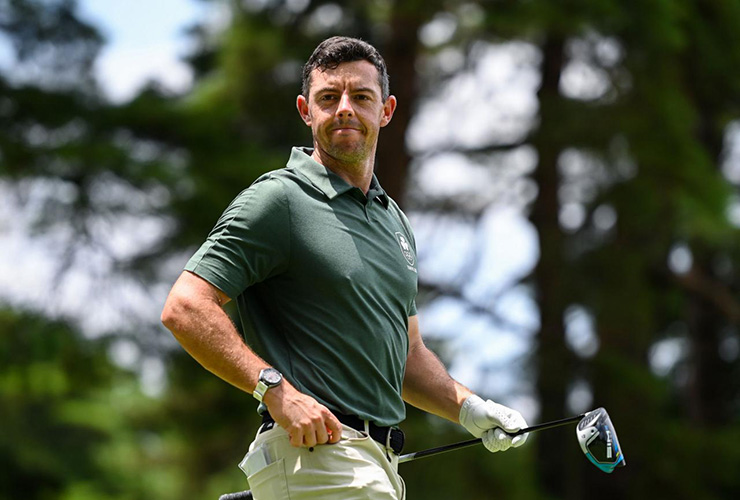 Rory McIlroy has had a change of heart about golf in the Olympics. Ramsey Cardy

By Ryan Herrington
Rory McIlroy is firmly in the chase for an Olympic medal entering the final round at Kasumigaseki Country Club, a Saturday 67 leaving him just three shots back of Xander Schauffele in a tie for third place. No doubt that has something to do with change of heart he’s displayed this week toward golf in the Olympics.

Even so, the newfound respect for competing in the Games has felt genuine, McIlroy acknowledging he had spoken too soon when in 2016 he memorably noted after announcing that he was not going to play in golf’s return to the Summer Games in Rio, “I’ll probably watch the Olympics, but I’m not sure golf will be one of the events I watch.” And what would he watch? “Probably the events like track and field, swimming, diving … the stuff that matters.”

On Friday, McIlroy sounded like golf also mattered, too.

“I never obviously competed in an Olympic Games, I watched them from afar, but being a part of something that’s completely different and bigger than me and even our sport in general, that’s a pretty cool thing,” he said. “I didn’t know if this was going to be my only Olympics that I play or whatever and I’m already looking forward to Paris [host for the 2024 games].”

MORE: Justin Thomas calls Olympics ‘the coolest thing I’ve ever been a part of’

There was more introspection on Saturday from the four-time major champion.

“I’m thinking about that. I need to give things a chance,” McIlroy said. “I was speaking to my wife last night and saying maybe I shouldn’t be so sceptical. But I think I need to do a better job of just giving things a chance, experiencing things, not writing them off at first glance.”

This isn’t the first international event that McIlroy has done an about-face on after actually competing in it. You might recall McIlroy initially downplayed the Ryder Cup, calling it merely an “exhibition” before playing for Europe for the first time in 2010. Suffice it to say, he changed his stance quickly once experiencing first-hand the passion surrounding the event.