‘Rory McIlroy, Player of the Year.’ Sure, let’s entertain the discussion By Joel Beall
It is a personal testament, really, that this argument is being had at all. We thought we grasped the magnetism Rory McIlroy holds over the sport, cultivating a rapport with fans and media unique among his peers. But perhaps we even underestimated that scope, because here we are.

“Here” being the idea that McIlroy, fresh off a FedEx Cup victory, has a résumé to rival Brooks Koepka for PGA Tour Player of the Year honours.

We get it, especially in this “EMBRACE DEBATE” culture. With a whopping two weeks without golf—who says the tour does not have an offseason—we need to talk about something, right?

So what the hell: Does Rory McIlroy have a viable case for POY? Here are the arguments for, and against, that cause.

McIlroy finished with the best non-Tiger strokes-gained season in PGA Tour history (or at least since 2003, when the statistic was first tracked). That metric underline italicizes and bolds McIlroy’s steadiness from start to finish in the 2018-’19 season. For what it is worth, Koepka finished ninth in the category.

But there is a flaw in strokes gained: It does not account for the Masters or Open Championship, only two of the biggest events on the calendar (more on this in a moment). McIlroy finished behind 93 combined players in those two tournaments; Koepka, just four. That strokes-gained figure, and the variance between the two golfers, takes a different shape were they’re part of the equation.

They both won three times

Yes, although not all wins are created equal. Koepka has the PGA Championship, the WGC-FedEx St. Jude, and the CJ Cup (which featured 11 of the top 30 players in the World Ranking). McIlroy has the Players, the RBC Canadian Open (which featured eight of the top 30 OWGR) and the Tour Championship/FedEx Cup. While East Lake had the 30 marquee names in the field, it was still a field of 30.

And for those asserting the Players is major-worthy, the fact that Brooks finished T-56 at TPC Sawgrass unequivocally proves it is, in fact, not a major. Speaking of …

Does Brooks deserve that much credit for his major finishes that weren’t wins?

Apparently Brooks joining a small company of Jack Nicklaus, Tiger Woods and Jordan Spieth as the only players to finish top four or better at every major in a single calendar year has been lost in the East Lake afterglow.

The question, of course, ponders whether some place too much importance on the majors. From an analytical view, yes, four weeks should not outweigh the other 40. That is not the reality of our sport, however, especially at the echelon that McIlroy and Koepka operate. It may be unfair, but those two—as well as Woods, Spieth, and Phil Mickelson—know all too well, history will mostly judge their seasons through a four-tournament prism. As a corollary, the Grand Canyon gap between Koepka’s major season and McIlroy’s almost puts this entire conversation to bed.

Even so, let us suspend that truth for the sake of discussion. If we are subtracting credit for Koepka’s major run under the idea that only wins matter, then we are damn sure doing the same to Rory’s top-four finishes at the Tournament of Champions (another 30-player event), the Genesis Open and the St. Jude. Even that is generous to McIlroy; can you really say finishing second to Dustin Johnson at Chapultepec is level with finishing second by one to Tiger Woods at Augusta or by three to Gary Woodland at Pebble? 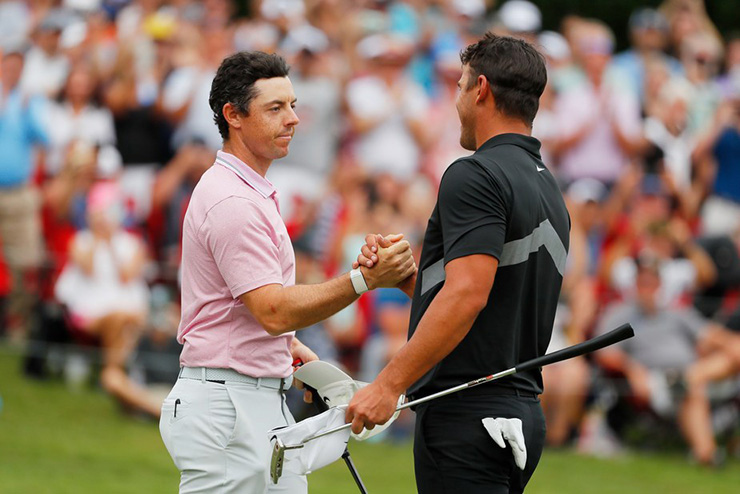 McIlroy sure did: 14 top-10s in 19 events (well, technically 13; not sure if getting bounced in the Sweet 16 of Match Play should qualify as a top-10) while Brooks “only” had nine top-10 finishes in 21 starts. Of course, Dustin Johnson had 12 top-10s to Brooks’ six last year and lapped him in strokes gained, and no one was making that argument.

McIlroy’s consistency was spectacular. That translated to a bunch of money and a high FedEx Cup standing. It does not automatically confer POY status.

This one was floated by a few talking heads after the Tour Championship. Not sure how Tiger Woods’ Masters triumph lessens the accomplishments of Brooks, but hey, he can add that to his suddenly fleeting list of slights.

By that logic, Rory’s season isn’t the biggest story in his own homeland. That honour goes to Champion Golfer of the Year Shane Lowry.

Of course, we are but lowly writers and fans. What say the players? Justin Thomas, the 2017 Player of the Year, is adamant on who deserves the award.

“Consistently, Rory has outplayed Brooks by a mile in how he’s done the entire year. It’s unbelievable how he’s played,” Thomas said on Sunday at East Lake. “But the most important thing is wins and playing great in the big events, and nobody has done that better than Brooks. I don’t know how you don’t give Brooks the Player of the Year with three wins and a major and a WGC and top four in every major. That’s pretty strong.”

As for Rory himself, well, he thinks Brooks should have it, too. Although added a slight jab in the process.

“He’s had a great season. He’s won another major, he’s won three times. And I know it’s going to sting because he most likely will win the Player of the Year, but he didn’t win the FedEx Cup,” McIlroy said following his victory on Sunday. “So I know it’s going to sting him for a bit, but I just wanted to tell him he’s playing so good. He’s the No. 1 player in the world, and he’s had a great season, and he said something similar to me, just happy for me.”

From his lips to the golf gods’ ears. Rory McIlroy, FedEx Cup champ … and Brooks Koepka, the Player of the Year.