Rory McIlroy and the Miracle Kid

The incredible story of Rory McIlroy helping a young star recover from a horrific accident.
By Max Adler

Traden Karch wasn’t necessarily the best player on the team, but the kid had a nose for clutch moments. Like his chip-in on the last hole to beat the team from Austin. Or the 40-foot bomb against Little Rock. First-year head coach Pete Chimarys had taken to calling him Big Shot Traden, and rather than disrupt the team mojo, he kept putting the slender towhead with the wavy putting stroke in the final group of the lineup. And because Traden’s easygoing manner was best-suited, or simply because they kept winning, Coach paired him with the team’s only girl, a strong player who outdrove many of the boys.

Though it was just a scramble-format tap-in, Traden sank the putt that clinched the team’s berth to the PGA Junior League national tournament in Disney World. A Tulsa television reporter who had never covered golf in her life arrived just in time with her cameraman. No one could know then how these few seconds of footage—white jersey No. 7 humbly retrieving his ball from the cup amid a mix of juvenile and parental cheering—would take on a life of its own.

That’s because Chuck Higgins of the PGA of America—who ran that regional playoff and whose duty it is to spread the gospel of “golf like Little League baseball” by driving to town-hall meetings across Oklahoma, Kansas and Arkansas—had used the clip extensively in his campaigning. In the days and weeks after the accident, it wasn’t hard for Higgins to tell people who Traden was. He was the boy from the video.

“Here’s this kid on top of the mountain, and now he’s fighting for his life,” as Higgins said many times.

Feb. 23, 2016, was rainy. The disappointment of finishing eighth out of eight teams at Disney World had faded. Traden was more excited about basketball. His grandfather had picked up him and his younger sister at school. At an intersection, a pickup truck turning left failed to yield. Given the low speeds, it wasn’t the sort of collision where emergency personnel expected serious injuries. But the truck was on a lift kit, so its raised bumper entered the minivan window at precisely the wrong spot, and Traden’s head received the brunt of the impact.

His sister shouted at him to wake up, wake up. By the time his grandfather got him unbuckled and laid flat, Traden was convulsing from a seizure, and it took considerable effort to restrain him. “It was horrific,” says Chris Karch, the dad. “Several nurses told us, later on, that they never thought he was going to make it to the next morning.”

For three weeks, Traden lay in a coma. At 4-feet-11, the 86-pounder shriveled to 66. His parents could only stare at the bedside instrument that measured the pressure inside their son’s skull. Numbers in the 40s were bad, 30s were less bad, single digits were what he needed to wake up. Whenever it rose to the 50s, they called the nurses. 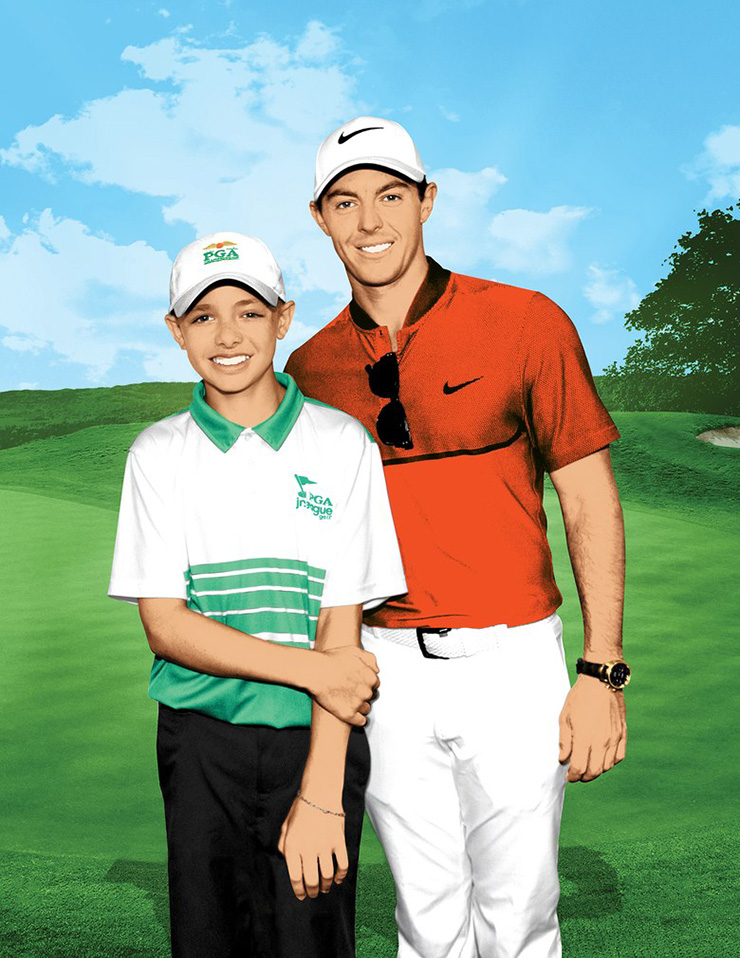 “After a week we knew he wasn’t going to die, but we didn’t know what further damage was being done—if he would be paralyzed or maybe forever be in a vegetative state,” Chris says.

It was around this time that Higgins relayed the story to Pete Bevacqua, CEO of the PGA of America. Bevacqua promptly sent a care package to the hospital, and in corresponding with the Karches, he learned that Traden’s favorite golfer was Rory McIlroy. So Bevacqua called McIlroy, and McIlroy said, “Whatever you need me to do.” That night in his hotel room—McIlroy was stitching together a semifinal run at the WGC-Dell Match Play—Rory filmed a private message for Traden: “I hope you’re feeling much better, and I wish you a really speedy recovery. Golf and the PGA Junior League need you. When you’re feeling better, I want you to come to a tournament so we can meet and hang out. Hopefully we’ll see you soon.”

The pressure inside Traden’s skull began to drop. The drugs keeping him unconscious were eased out of his system, and he began to stir. Loopy, he smiled at his parents, and for a couple days watched them laugh and weep. It was a joyous time. But when Traden tried to speak, his words were gone. Forget syllables—his throat could barely produce sounds. The straight-A student realized his mind was different. He didn’t know this muscular Irishman who had sent him a video.

“Traden didn’t want to interact,” his dad says. “We tried to talk, but he would just cry. He spent a couple days like that.”

Aphasia is an inability to comprehend or formulate language. Most often the condition is caused by a stroke, and so it’s rare among children. As immense a physical recovery that Traden faced, relearning the meanings of words and how to connect them in spoken sentences would prove the far greater undertaking. The neural pathways of Traden’s brain were like city streets devastated by an earthquake—certain messengers needed to find new routes, and there was no map. With brain injuries, if and to what degree a person will recover is guesswork.

“The doctors thought he would remember everything up until the accident but have trouble forming new memories and learning,” says Manda, Traden’s mom. “But it turned out be just the opposite.” 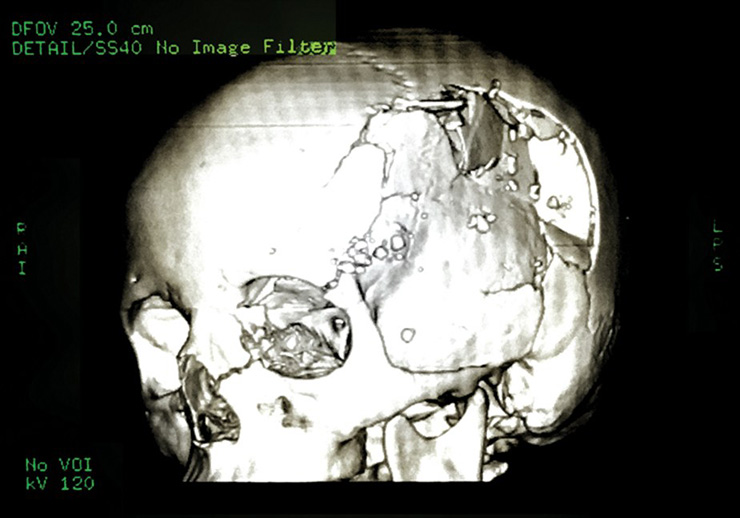 The damage to Traden Karch’s skull from the traffic accident. (Photo courtesy of Karch Family)

Traden didn’t remember childhood friends. He didn’t remember several of his relatives. He didn’t remember not to pull the string on the garage door. With rather stoic nonchalance, he said “no” when asked if various details from his 12 years on earth rang a bell. But he remembered his mom and dad, and when Dad brought his putter to rehab, the boy’s eyes glimmered. He took his old grip, and the putting stroke was unmistakable. Later, when he was strong enough to pitch foam balls in the parking lot, his swing was the same. Like it had never left.

When he got out of rehab, the strangers who threw a party for him at the golf course seemed nice, so Traden went to them and laughed. The families and friends who organized fundraisers on his behalf—the driver of the pickup had been uninsured—treated him like an old teammate. The pro who gave him lessons seemed to already know his habits inside and out and could communicate swing tips without words. Golf was a good place. Playing something like basketball was to risk death, but Traden could hit as many range balls as he wished. When he was done, he’d eat a cheeseburger at the Broken Arrow clubhouse or a medium rib-eye with baked potato at home.

His mind grew stronger, too. He knew who the Irishman was and stamped his feet in delight at the fact he was flying to the PGA Championship to meet him.

In a private room to the side of the Baltusrol range, Bevacqua, McIlroy, agent Sean O’Flaherty and the Karches shared a tender gathering. Then Rory led Traden to his locker, and for half an hour the rest waited. “Rory was incredible,” Chris says. “Until you see it in person, you can’t imagine how in-demand a top player is. Media interviews, corporate requests, everywhere we turned somebody wanted him. For him to slow down and take all that extra time to be with just Traden meant a lot.”

Sometimes his teammates on the Oklahoma All-Stars step in to guide interactions with opposing teams. When Traden can’t find a way to express himself, he looks at the sky in frustration. Still, his positive attitude persists. Visits with golfers Bo Van Pelt and Brad Dalke have no doubt helped keep his spirits up. Traden is in remedial English but just tested into advanced math. In a recent casual nine holes, Traden made four birdies from the men’s tees.

“If he didn’t play golf, didn’t have somewhere to go to be with buddies, I’m not sure where he’d be,” says Chimarys, Traden’s former coach. 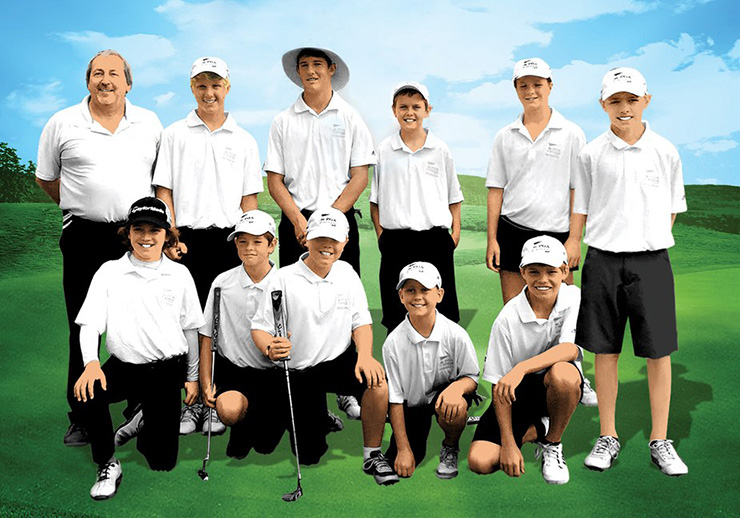 “I used to have these dreams that Traden would become a doctor or a lawyer,” Chris says. “Those dreams were personal and selfish. Prestige doesn’t guarantee joy. I don’t know if Traden will ever fully get back. But he can be a productive member of society, have a family, so he has every opportunity for a happy life. It’s now up to him.”