Rory McIlroy sets the tone for a big 2016 on Earth 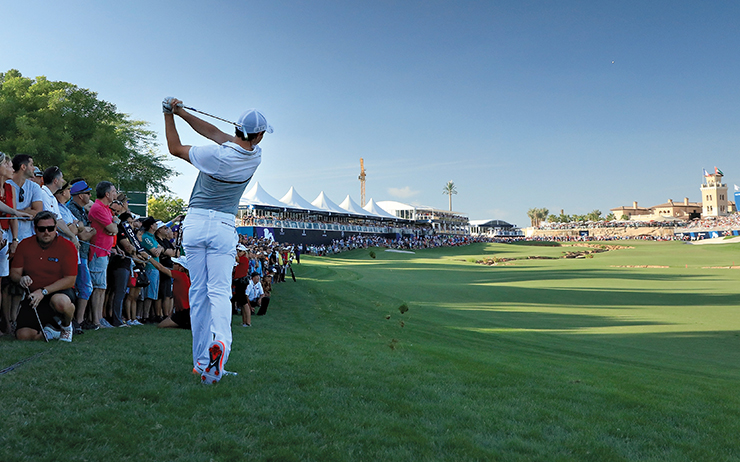 In one of the great desert duels of recent years, Rory McIlroy showed once again that when he’s in the zone, he can elevate his game to a place that the likes of an inspired Andy Sullivan (or anyone else for that matter) can’t quite match
By Robbie Greenfield

ory MciIlroy dug deep on the Earth course at Jumeirah Golf Estates to spectacularly salvage an injury-hit year in which the majors (not to mention Jordan Spieth) passed him by. Make no mistake, as brilliant as his (slightly controversial) 12-event demolition job on the Race to Dubai was, capped by this thrilling climax against the year’s only other three-time winner in Andy Sullivan, McIlroy will not be filing 2015 away in the drawer marked ‘vintage’. Not when he came up empty-handed in the majors and was forced to sit out his favourite tournament played on his favourite course. Not when both Jordan Spieth and Jason Day have moved ahead of him in the world rankings. Twelve months ago, McIlroy was alone at the summit of world golf. Spieth was making a statement towards the back end of 2014, but no one seriously expected the 22-year-old Texan to eclipse the man who had just claimed the year’s final two majors in superb style.

Rory McIlroy didn’t do anything in Dubai last month that he hasn’t done before. In the last four DP World Tour Championships he now has two victories (the other coming in 2012), a tied fifth and a tied second. He is cumulatively 73-under par for those four events, with a stroke average of 67.45. It’s fair to say he gets on well with the Earth course. As well as being McIlroy’s second victory at Jumeirah Golf Estates (he also won the Omega Dubai Desert Classic back in February), this was his third Race to Dubai crown in four years.

Leaving aside for one moment the fact that the World No.3 cantered to a brilliant 21-under par on a layout that is anything but easy, it wasn’t what McIlroy did, but rather how he did it, that augurs so well for 2016. This was a competitive statement more than anything else. It was a declaration that the Rory McIlroy of late 2014 is back.

The 380-yard moon drives (like the one he hit on 16 that sailed majestically over a bunker 315 yards from the tee box) have always been there, but ever since his victory at Quail Hollow back in May, that ability to rummage around and find an extra gear when pushed has been conspicuous by its absence. McIlroy has looked out of sorts, unable to summon the kind of putting clinics that Jordan Spieth has trademarked this season. A year that was stopped abruptly in its tracks when he ruptured his ankle playing a friendly game of football in early July was in danger of limping into a new season with his considerable golfing mojo still missing in action.

Enter an inspired Andy Sullivan and one of the great head-to-head clashes ever seen on a golf course in the Middle East. Sullivan is the only other three-time winner on the European Tour this year, and while he’s clearly no Spieth, Day or even Rickie Fowler, the Englishman enjoyed the finest week of his career on the Earth course, combining brilliant form with a carefree attitude and a refusal to lie down and be beaten. Except he was, by possibly the only player on the planet capable of doing it.

Three in front with 12 to play after a blistering start to his final round, Sullivan watched McIlroy make a hat-trick of birdies from holes five to seven, then add another four on the back nine. By the 17th tee the Northern Irishman had forged a two-shot lead and looked to have settled matters until a pushed six-iron found water and he was faced with a monster 40-foot bogey putt. When the putt dropped dead centre to preserve his lead, McIlroy later described it as ‘the best bogey I’ve ever made’. McIlroy the magician, who was last seen in the gloom at Valhalla as he rescued the PGA Championship with a brilliant final round back nine, was officially back.

“I think what we saw last month in that last round was a further indication that when fit, healthy and in-form, Rory has another level that he can go to that takes him away from his peers,” says Justin Parsons, the director of instruction at the Butch Harmon School of Golf, Dubai Sports City.

“I caught up with him that Sunday night after he’d just won, and what pleased him the most was the way in which he responded to Andy Sullivan really piling the pressure on. Rory put his afterburners on and away he went. It was interesting to see just how thrilled he was with the win, because it’s not new territory for him.”

Throughout his career, McIlroy has always been a quick and astute learner. We saw how he used his Masters meltdown in 2011 to come right back and win the very next major at the U.S. Open, but it’s not just in these seminal moments where the 26-year-old has shown a propensity to learn from past experiences. He realised quickly that his very public relationship with tennis star Caroline Wozniacki had hurt his golf game, and has kept his private life just that ever since.

He learnt also from a rocky 2013 in which he juggled new equipment, a slump in form and an ugly lawsuit with his former management company. And there is no doubt that McIlroy will have taken things from this year too. After initially reacting defiantly when asked if he was still planning on playing football with his mates – ‘I’m not going to stop living my life’ – he had said, a more reflective McIlroy has recently admitted that will be the last time he will kick a football during the heart of the golf season.

With a renewed focus on putting, McIlroy has also absorbed the lessons from the likes of Jordan Spieth and Day. “He’s recognised that this area can set him apart, because of how good his ball striking is,” adds Parsons. The new season can’t start soon enough.