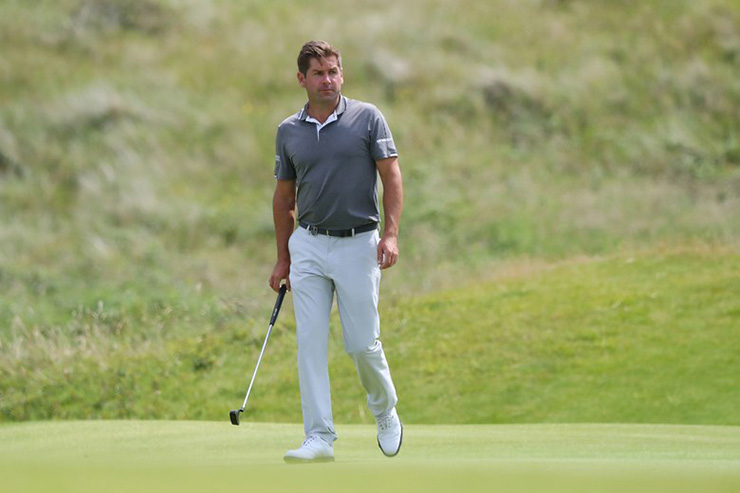 Robert Rock looks on during a practice round prior to the 2019 Open Championship at Royal Portrush. (Francois Nel/Getty Images)

By John Huggan
Robert Rock isn’t part of the 75-player field at the $7 million Turkish Airlines Open, the sixth of eight Rolex Series events on this season’s European Tour. But golf’s most famous head of hair is still to be found on and around the picturesque Montgomerie Maxx Royal course this week. Known also for the quality and efficiency of his full swing that at its best helped him knock off Tiger Woods and Rory McIlroy down the stretch to win the 2012 Abu Dhabi Championship, “Rocky” has become a unique figure on the Old World circuit. Still exempt after finishing 108th on this season’s Race to Dubai, the 42-year-old Englishman doubles as one of the most sought-after swing coaches.

“I like to consider myself an old-style golf pro,” says Rock, a two-time European Tour winner. “I’ve always taught people. I started as a club pro and never really thought I’d be playing tournaments. So I’m just returning to that, an area of the game I’ve always enjoyed and where I feel like I can make a contribution.”

Rock’s most high-profile client so far has been rising English star Matt Wallace, No. 28 in the World Ranking, but that might change. Ten-time European Ryder Cup player Lee Westwood is the latest recruit to a growing stable that numbers nearly two dozen.

“Rocky and I have grown a lot together,” Wallace says. “I love the way he teaches. And I love the stuff he tells me that has nothing to do with the swing. When I played with Tiger at the Open this year, [Rock] gave me so much great advice about how to handle that. He has taken me to the next level, really. When he tells me what will work under pressure, he really knows. And he can get inside my head better than someone who is just a swing coach.” 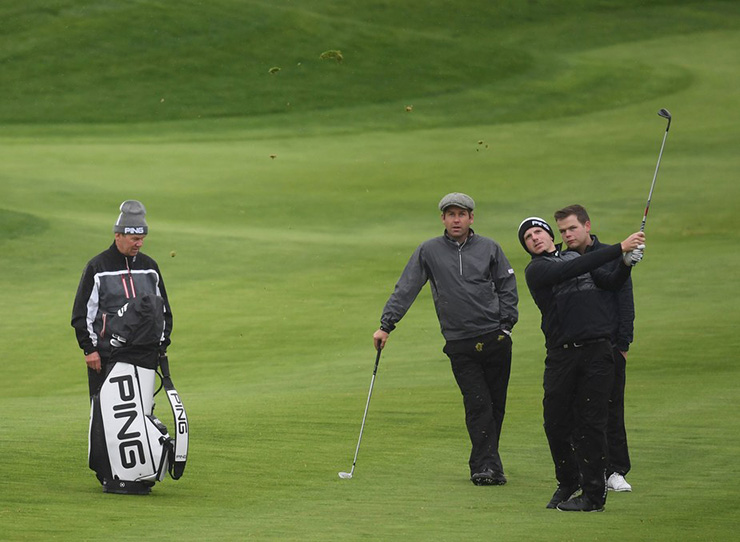 Rock watches Matt Wallace, one of more than 20 golfers he has begun working with as a swing instructor. (Ross Kinnaird/Getty Images)

Part-time psychologist Rock may be, but his main focus is on the full swing. It is a subject in which he is well-versed.

“It’s nice to be known for my swing,” Rock says. “I’ve worked hard on it. I have always tried to eliminate extraneous movement. I like efficiency. I’m not a naturally good golfer, so I’ve learned the game bit by bit, eliminating the problem bits in my swing and the bad shots along the way. I’ve had to do it that way. I’ve never been a great putter. You can’t afford too many sloppy shots if you are not making too many putts.”

That list contains a wide and diverse range of actions, proof enough that Rock has never been tempted to create swings and players in his image. He retains a somewhat old-fashioned approach to his second job.

“Aesthetics are not that important to me,” Rock says. “A really good swing tends to look quite nice, but it doesn’t have to. If you are careful and organize the bits that matter, you can make just about anything work. Plus, I don’t want to be the sort of coach that uses endless devices to help a player. TrackMan doesn’t have ears, which is why I like to work out what players are doing. I like to watch. I like to listen to the strike. I like to make sure shots sound as if they are coming off the club properly. That is something that only comes after years of paying attention. OK, shots often look similar. But if they don’t sound crisp, the player isn’t going to be too consistent, especially under pressure.”

What Wallace also appreciates about working with Rock is that he doesn’t necessarily take himself too seriously. “He’s older than me. He’s uglier than me. But he does have great hair,” Wallace jokes. “I can’t imagine what he has lost in hat endorsements.”

As for his playing career going forward, Rock is sanguine but realistic. He recognizes that the potential “black hole” that can engulf so many in their mid-40s—no longer competitive on the regular tour, too young for the senior circuit—is getting closer.

“I’m going to play as long as I am exempt,” Rock said. “This year I’ve played 20 events. I’ll do the same next year. As I’m going to be on tour anyway, I might as well play. That actually helps me help my guys. I can relate exactly to what they are seeing and doing, which is not to say many players couldn’t do what I am doing. Guys out here know more than they think they know. But people get a little bit scared by coaching. They think you have to know loads—and I suppose you do—but I can think of plenty who would have a lot to offer as coaches even as they are still playing. Right now, though, I’m the only one.”