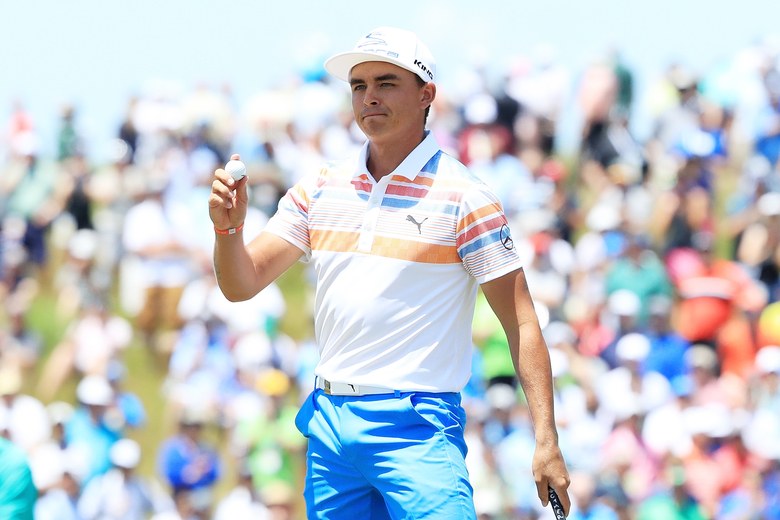 The weather in Wisconsin was ideal on Thursday for the first round of the U.S. Open at Erin Hills, forcing Phil Mickelson to finally withdraw in the morning and providing numerous low scores on the top of the leader board.

None lower than the score of Rickie Fowler, who carded a bogey-free seven-under 65, matching the record for lowest score in relation to par in the first round of a U.S. Open. He joins Jack Nicklaus and Tom Weiskopf, who each shot seven-under 63s at Baltusrol in 1980, as the other players to accomplish the feat.

Fowler, 28, took advantage of the par 5s at Erin Hills, making birdie on all four. Every facet of his game seemed to click in his opening round, evidenced by his hitting 12 of 14 fairways and 15 of 18 greens in regulation. The four-time tour winner is playing in his 10th U.S. Open, an event he’s finished in the top-10 in twice, but has missed the cut in his last two appearances. He takes a one-shot lead into Friday after shooting the lowest round he’s ever shot in his major championship career.

One back is Paul Casey, who shot a six-under 66 in the afternoon wave. The Englishman set the tone on the first two holes, making eagle on the 613-yard par-5 first and birdie on the 330-yard par-4 second. He made five more birdies and two bogeys the rest of the way. Casey, 39, is playing in his 14th U.S. Open, an event he’s missed the cut in six times and has finished in the top 10 just once.

Making his first appearance in the U.S. Open is Xander Schauffele, who finds himself tied wth Casey after a bogey-free 66. Schauffele has finished in the top 25 three times and the top 10 once in his first season on the PGA Tour.

Three players are at five-under, including Brooks Koepka, whose 67 featured just one blemish on the par-4 eighth hole. Koepka has become a fixture at the U.S. Open in recent years, finishing T4, T18 and T13 in his last three appearances.

Brian Harman and Tommy Fleetwood round out the trio at five-under with bogey-free 67s. Harman is making his third appearance in the U.S. Open and had missed the cut in his first two, while it’s only Fleetwood’s second, the first coming in 2015 at Chambers Bay where he tied for 27th.

After the top six, a total of 22 players are within five shots, including two-time U.S. Open champion Ernie Els and Masters champion Sergio Garcia, who both posted two-under 70s. Amateur Scottie Scheffler shot a three-under 69 and sits just four shots back.

Dustin Johnson (three over), Jon Rahm (four over), Rory McIlroy (six over) and Jason Day (seven over) came into the week as some of the betting favorites, but will have work to do just to make the cut.