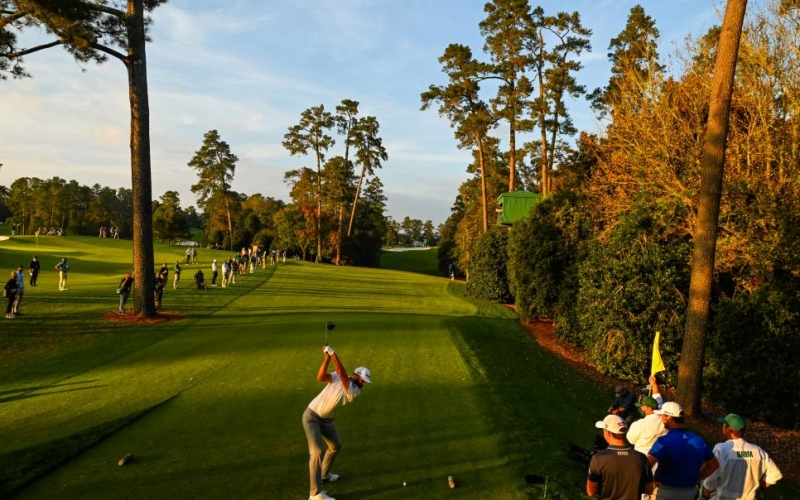 JD Cuban
Dustin Johnson tees off to a near-empty tee box on the 18th hole during November’s Masters.

By Ryan Herrington
In fewer than 100 days, the first round of the 2021 Masters is scheduled to begin at Augusta National Golf Club. Whether spectators will be in attendance remains uncertain, however, after a report that officials have informed ticket holders that they are pushing back the ticketing process for this April’s tournament.

According to a story from ESPN, the club updated patrons via an email on Tuesday. “As planning continues on how to stage the 2021 Masters Tournament safely and responsibly, we would like to inform you that Augusta National is delaying the ticket process for Patron Series Badges, which traditionally begins Jan. 1,” the email said, according to ESPN. “Our intention is to communicate our decisions for the 2021 Masters to all patrons of record by the end of January. No further action is needed with your account at this time.”

The club had yet to respond when contacted by Golf Digest about the email or its future plans.

COVID-19 forced the postponement of the 2020 Masters from April until November and prevented the tournament for allowing fans to attend when it was held last fall. Dustin Johnson’s five-stroke victory was witnessed in person only by a select number of Augusta National members and media.

Fans who had tickets for the 2020 Masters were given the option of deferring their use until 2021. Spectators who won the lottery for tickets for 2020 practice rounds also had the option of holding on to them for 2021.

In the coming weeks, Augusta National officials will have to decide from a handful of potential scenarios. The best outcome would be that they get assurances from state and local authorities that it is safe to allow a full or near full complement of ticket holders to attend. The tournament doesn’t release information on how many tickets are sold but estimates are between 30,000-35,000 a day during tournament rounds. Given the current number of coronavirus cases around the country and the continued surge in numbers, even with the early administration of vaccines, this seems an unlikely outcome.

More reasonable would be allowing a smaller number of fans to attend, although the logistics of how many and how the club would determine who could gain admission would need to be worked out and would be a significant challenge to determine.

A third option, of course, would be to play the major for a second straight year without patrons. It was a scenario that Masters chairman Fred Ridley acknowledged as possible in November, but was hopeful that other measures could be put in place to avoid.

“We would need to see objective data that would give us a high level of confidence that we could bring large numbers of people onto the grounds for April,” Ridley said last month. “I think the vaccine … I don’t want to get into medical prognostications, but just logically as a layperson, the vaccine, while it will be wonderful when it happens, there are all kinds of issues that point to beyond April [for the vaccine] as the silver bullet.

“As it relates to [COVID-19] testing, there are some real opportunities there. Our staff has been exploring those very deeply. We have a number of people who are very interested in helping us. It is something we will be looking very hard at. It’ll be a wonderful circumstance if we could test large numbers of people.”