Reed proves he’s a “gamer, not a range guy” with opening 65 on Earth 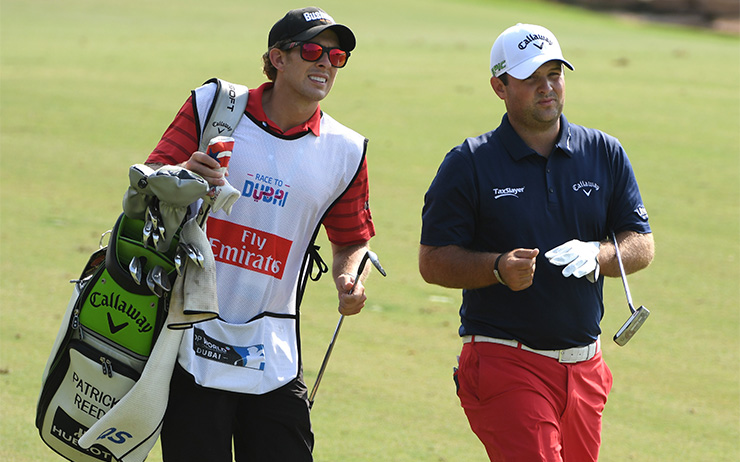 By Kent Gray
Captain America flew into Dubai on the back of a missed cut in Mexico and woke up this morning with a crook one. He then hit it lousy on the range and must have figured it was going to be a long lap of Earth in the opening round of the DP World Tour Championship.

Caddy Kessler Karain felt compelled to intervene just before his brother-in-law boss pegged it up at  10.15am, reminding Patrick Reed that he’s well, you know, Patrick Reed, the Ryder Cup superhero.

The message clearly got through with the world No.23 rattling off back-to-back birdies at either end of his round and seven in all to nab the first round lead with a 65 at Jumeirah Golf Estates Thursday. Justin Rose and Scott Hend are a shot further back while six players share fourth on -5, including defending champion Matthew Fitzpatrick. Rose has replaced Fleetwood atop the predicted Race to Dubai standings after the long-time leader stumbled to a one-over 73 while Sergio Garcia opened with a 70 but needs a lot more magic to feature in the order-of-merit conversation.

It was certainly satisfying for Reed after the 27-year-old Texan made the most of an unwanted weekend off at last week’s OHL Classic at Mayakoba in Mexico after shooting 70-72.

“I feel like the hard work I did with my coach right after México really paid off coming to this week,” Reed started before revealing the full truth. “I felt like yesterday I put in a lot of good work. I felt like the swing was right where it needed to be, and you know, I woke up this morning, had this really awful pain in my back, close to my shoulder.

“The warmup wasn’t how I wanted to. I was kind of spraying it, and then my caddy just looked at me and reminded me, ‘Hey, you’re a gamer, not a range guy. Let’s get off to a good start, hit some fairways and hit some greens.’

“Any time you can start birdie-birdie, it gets you started and I was able to right the ship and make some putts and hit some good shots.”

Like this one on 18 to finish with a flourish:

It’s certainly not bad for a guy who is only playing Dubai to ensure he keeps his card for the 2017-18 European Tour season. The DP World is his fifth event outside of the majors and the WGCs after Hong Kong, the Scottish Open, the Porsche European Open and Presidents Cup – the latter much to Reed’s surprise.

Next season the prerequisite is cut to four regular season events and will make it much easier for Reed. “I’ve always enjoyed playing on both tours and having both memberships.”

After leading Team USA to Ryder Cup redemption at Hazeltine in 2016, Reed’s 2016-17 PGA Tour campaign has been steady without being spectacular. Most crucially it’s been a winless 2017 this far. The highlight was a share of second to Brooks Koepka at the U.S. Open but that was one of only four top-10s in 29 starts as he finished the FedEx Cup in 22nd with $3.05 million.

His start to the new PGA Tour season hasn’t been overly impressive either. Before Mexico he was T-11 at the CJ Cup @ Nine Bridges in South Korea before finishing a lowly T-50 at the WGC-HSBC Champions in China with a weekend of 82-74.

So how desperate are you to end the season with a win in Dubai?

He leads by one in Dubai. pic.twitter.com/8SyHGkZ4TQ

“It’s important but really the biggest thing for me is just improving my golf swing, improve around the greens and improve in all areas. I feel like earlier this year either I hit the ball well that day and didn’t make any putts or I hit it great the following day and missed putts. Been inconsistent on what shows up and what doesn’t.”

Pretty much like we saw on the range and the course Thursday, even if he did “feel like I left two or three out there that I left short right in the heart [of the cup].”  Goodness only knows what Captain America could do if everything clicks. A good night’s sleep sounds like a good place to start.

Patrick Reed’s lowest opening round of the year ✍?