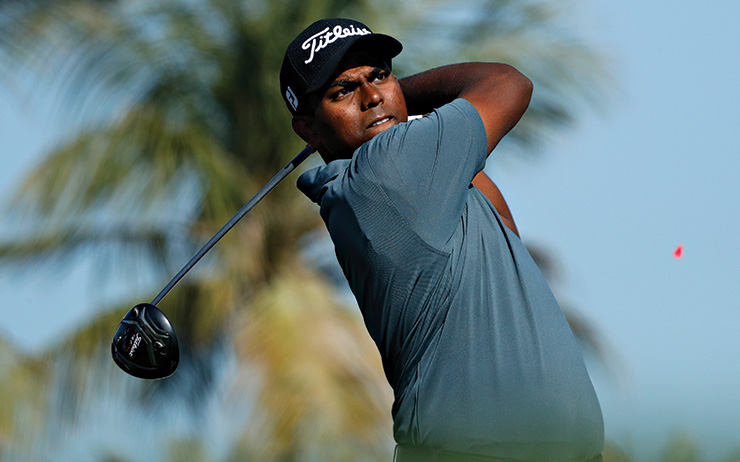 Rayhan Thomas is determined to finish his dream Omega Dubai Desert Classic debut in red numbers. Whatever transpires in Sunday’s final round, Saturday will go down as a red-letter day in the talented teen’s life.

The Dubai-adopted Indian amateur made his first European Tour cut at just the third attempt, easing into the weekend three shots inside the 36-hole snip.

A topsy-turvy Saturday, which saw the 17-year-old play 33 holes after Friday’s tournament delaying storm, continued when he signed for a third round 75 to be +1 for the championship.

In typically unflustered fashion, Thomas played down the feat but that didn’t stop it reverberating around the Middle East golf landscape, most notably at his home Dubai Creek Golf & Yacht Club. They were celebrating too at Emirates Golf Club in the ‘golf in DUBAi’ offices, none so more than vice-chairman and CEO Mohamed Juma Buamaim who oversees the developmental MENA Tour from which Thomas earned, an learned to grab, this moment.

“It was awesome to make the cut but I wasn’t really thinking about it,” Thomas said afterwards. “Obviously I had two more rounds to play [today] so that was what my mind was on. But pretty happy to make the weekend.”

Thomas planned a relaxing dinner out and a early night in afterwards in the hope of a big finish Sunday. “If I can get myself back into red figures, I’ll be happy.”

It’s little wonder he was tired after a nerve-jangling day, probably more for his growing legion of fans than Thomas himself.

Resuming his second round at even par (-4 for the championship after Thursday’s sparking 68), Thomas teetered with a double bogey on the 5th and further dropped shots on the 6th, 10th and 12th before getting it back to -3. But he then threw away back-to-back birdies on 16 and 17 with a watery, double-bogey seven on the 18th to eventually sign for a 75. Thankfully he comfortably made the cut which fell at +1.

His third round was even more adventurous. Starting from the 10th, he rattled off five birdies and a bogey in an outward 33 before fading back to a share of 54th place courtesy of a tired double bogey on the short 2nd and a triple bogey on the par 3 7th.

“I was trying to hit a six-iron and just caught it steep. Went in the water and then hit a wedge onto the green to about 25 feet and three-putted unfortunately. It was just lack of concentration with the putter.”

Thomas admitted to being mentally drained afterwards. The good thing about that is he can bank the feeling and knows what he needs to work on for the future.

“I can’t complain about the start [in the third round], was 4-under through nine, but unfortunately fell away on the back. I think I just got a bit tired, head popped up, made a couple of bad swings and that cost me.

“You have to focus so much on every shot. So when you’re on the back nine and start making a few bad swings it takes it out of you. But overall, I’m pretty happy with it.

“Played well on the [his] front [the Majlis’] back nine, so some positives to take away and take that into tomorrow.”