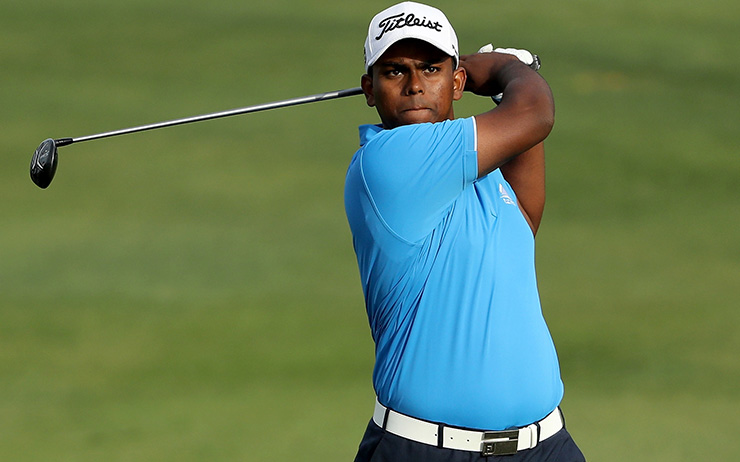 Most golfers would be utterly deflated after watching a four-footer slip by and with it a chance to play the matchplay stages of the British Amateur. But Rayhan Thomas isn’t your average amateur.

Far from being downbeat after missing the cut at the 122nd edition of ‘The Amateur Championship’ by one stroke, the 17-year-old Dubai-based Indian is looking ahead with fresh confidence after going so close.

Thomas is now counting down to the U.S. Junior Amateur Championship at Flint Hills National Golf Club in Kansas from July 17-22 and beyond that the coveted Western Amateur to be hosted by Skokie Country Club in Glencoe, Illinois from July 31-August 5.

There is the small matter of his 10th grade school exams beforehand after they were put on ice so he could play the British Amateur. But Thomas is clearly itching to head to the U.S.

“I can’t wait to get back and start playing some tournaments after this because it gives me a lot of confidence knowing I played really well and can make it at the highest amateur level,” Thomas told Golf Digest Middle East.

“So yeah, just work harder and we can get there.”

Thomas took plenty from the experience on the Kent coast where he backed up an opening one-under 71 at Prince’s GC with a one-over 71 at the Sandwich club’s Open Championship venue neighbour, Royal St. George’s.

The Dubai Creek member looked out of it in Tuesday’s second round when he slipped to four over through five holes as the wind whipped up but battled brilliantly to get it back to even par after the 11th. A bogey on 12 was then cancelled out with a fifth birdie in eight holes on 14 only for the dream to be dashed by a three putt bogey on 18, sealed by the missed four-footer.

Thomas was one of 12 players to finish the 36-holes of strokeplay on even par and miss out by one.

“The field depth was unbelievable. The cut at the start of the day was one under and it did not move,” said Thomas.

“I thought with the wind picking up it would maybe move to level par, one over but with 288 players one stroke can move you about 40 to 50 spots so I was a victim to that on the last hole when I missed that putt.

“Other than that, I love the British Am, I think it was run brilliantly, the pace of play was superb, the coursers were fantastic. I love links golf. Going forward, not much to do, I felt I played really solid, just had a rough start today and missed one short putt which would have made my week if I’d made it.”

Irishman Caolan Rafferty led the top-64 qualifiers on -10, all of which he picked up in a 10-under 62 in his second round at Prince’s. The score matched Kevin McAlpine’s Amateur Championship qualifying score on the Old Course at St Andrews in 2004 and broke the Prince’s course record by two following Gisli Sveinbergsson’s (Iceland) 64 on Monday.

Richard Finch carded the lowest qualifying score with a 61 at Pyle & Kenfig in 2002.