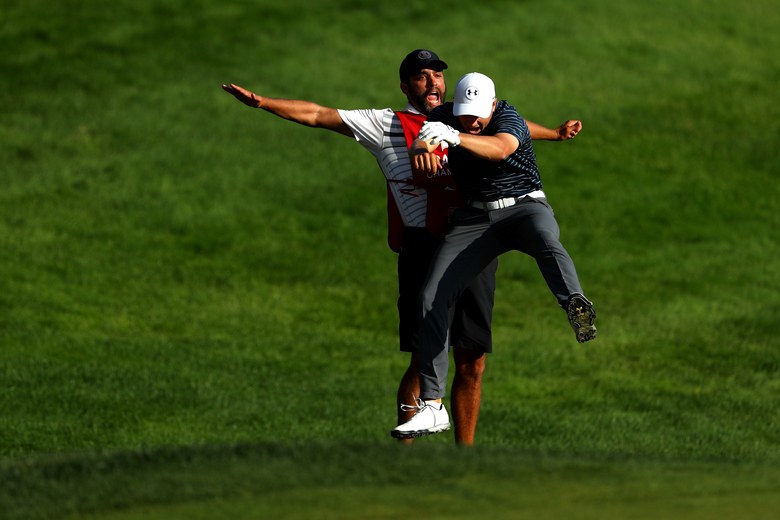 Golf is not a style-over-substance sport, especially when it comes to celebrations. Perhaps no game has produced such poor triumphant gestures, often highlighted — er, lowlighted — by the failed high five. So when a player properly executes an emotional outburst it’s, well, cause for celebration, as noted by Jordan Spieth’s fit of revelry during Sunday’s playoff at the Travelers Championship.

Which got us thinking: where does Spieth’s celebration rank among golf’s all-time reactions? A highly unofficial list:

Okay, technically not from tournament play. Conversely, this might have been the moment where the Europeans lost the cup at Hazeltine.

Larry’s leap would be higher on the list, but loses points for its “Hey, no running!” speed-walk ending.

In hindsight, the sand angel would have been the play.

Phil Mickelson might have been the golfer with baseball aspirations, but pretty sure Tiger’s hat throw clocked in at 92 mph on the radar gun.

Raw, unfeigned emotion, as if Rocca was possessed by a spirt. That it came after a muffed chip makes it all the merrier.

History. ? This guy is good.

The chest pump left a tad to be desired — Spieth went for the reverse, Michael Greller the straightforward standard — but negated by the simultaneous wedge-n-rake toss. Teamwork makes the dream work.

You couldn’t fit a tennis ball between Phil’s peak and the ground, yet a moment so iconic it warranted a logo.

Between this and the Bay Hill outburst, this was the year Tiger avenged his high-five fail at the 2005 Masters.

Brought the love to the fans and sealed it with a kiss. Only way Irwin could have topped that is by running through the gallery and off the course with his hand touching the sky.

Aside from a Jimmy Buffet concert, you’ll never see so many poorly-dressed, middle-aged white dudes overcome with such rapture.