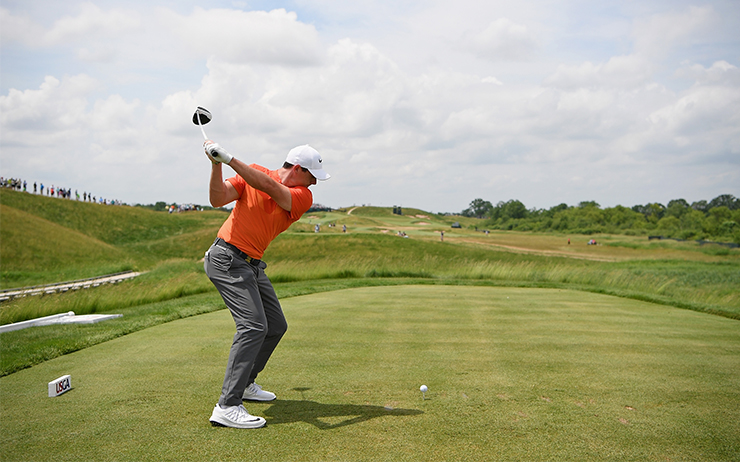 This is the first U.S. Open I’ve attended and after we practiced for the first time on Monday afternoon, I’ve got to say Erin Hills really wasn’t what I expected to find.

Certainly off the tee, the golf course is big and it’s pretty wide to be honest. It’s right out in front of you so I spent Monday looking for different strategies off the tees to ensure we avoid the really penal areas.

I think some of the players have made more of this whole fescue thing than they’ve probably needed to. I think Rory’s comments are probably correct in that you really shouldn’t be missing a fairway that’s 60 yards wide. That said, if you do find the rough, you are going to get punished.

The one thing I would say is the fescue is very, very heavy right off the fairway whereas if you do actually end up missing by 15 or 20 yards, you will invariably get a better lie which does seem a little unfair.

They’ve taken the rough in by three to five feet on most holes so it presents pretty well off the tee although there are two or three blind tee shots to be negotiated.

I think the golf course from a second shot point of view, that’s really where we going to see the men separated from the boys. Look for some good iron players to do well, providing they can drive it far enough because I don’t think its going to favour a shot hitter.


Crazy golf it’s not
The pin locations I’ve seen for this morning are pretty well tucked in the green complexes. It’s a new courses and the designers have done well not to make it too crazy, but the green completes are challenging with a lot of little shoulders and shelfs and places where they can hide the flags. 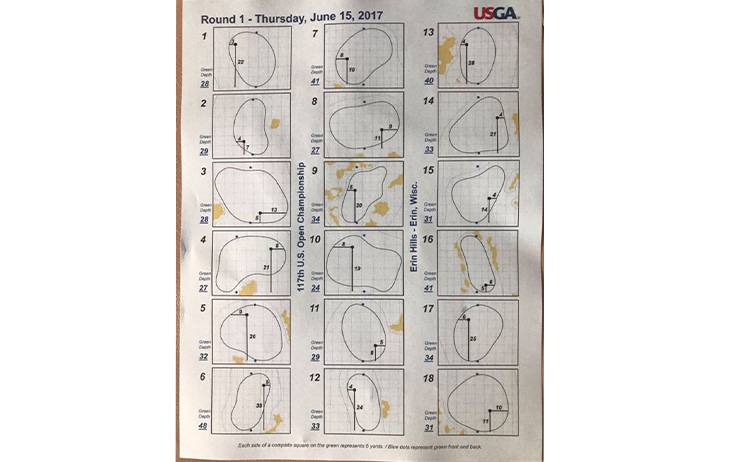 The first round pin positions

Certainly on reviewing the pin placements for Thursday, there’s a lot of flags that are tight to the front edges and tight to the edges of greens.

We’ve been looking at ways, certainly on the half dozen holes you can get in with a mid to short iron, particularly the three or four short iron holes, of making sure we understand the angles that we are going in at. We’ve also paid close attention to some of the pin locations that will be both helped and hindered by some little shelfs and little shoulders that you can get access to.

The greens are quick, The surfaces don’t look that good but that’s just the fescue. They seem to be running very well. Some are very, very fast and there are a lot of run offs on either side so again look for good chippers to do well this week.

If you think of the 9th at The Els Club in Dubai, maybe not quite as severe as that, but the ball running down to a little gathering area. So don’t be surprised if somebody with a good chipping game, whose able to negotiate that fairly well, challenges. In true US Open style, the winner will obviously need to putt well too.

We had a weather warning last night [Wednesday], kind of like a tornado warning at one stage, but the weather seems settled this morning, light winds, maybe 20 degrees already at 7am and I know they’re away already in the first round.

So you looking for players that are solid off the tee, hit it far enough, guys in what I call the mid to upper echelon, you know, the likes of Westwood, Stenson, Rose, all the way up to DJ and Bubba Watson. You definitely need to hit it far enough to contend.
I think we’ll also be talking about a good iron player come Sunday, somebody who can really control the trajectory and the shape of the ball coming into the green. So again, guys like Molinari, guys like Rose are possibly going to do well.

I watched DJ practice yesterday and he looked a little bit rusty. But Claude [Harmon] and he did some good work and by the end of the session he looked in pretty good spirits.

And my guy? Well I’m pleased to say Peter warmed up and practiced really well so he looks good this week. He’s feeling great and he’s nice and relaxed ready for his professional U.S. Open. It’s certainly going to be a fascinating battle. Enjoy! — With Kent Gray.

Justin Parsons is the Director of Instruction at The Butch Harmon School of Golf at The Els Club, Dubai. Among his pupils is celebrated Dubai-based Indian amateur No.1 Rayhan Thomas.

Meet the amateur bomber who’s powered his way on to the U.S. Open leader board