Random fan sneaks onto Torrey Pines and takes a few swings in the fairway, actually has a pretty nice swing 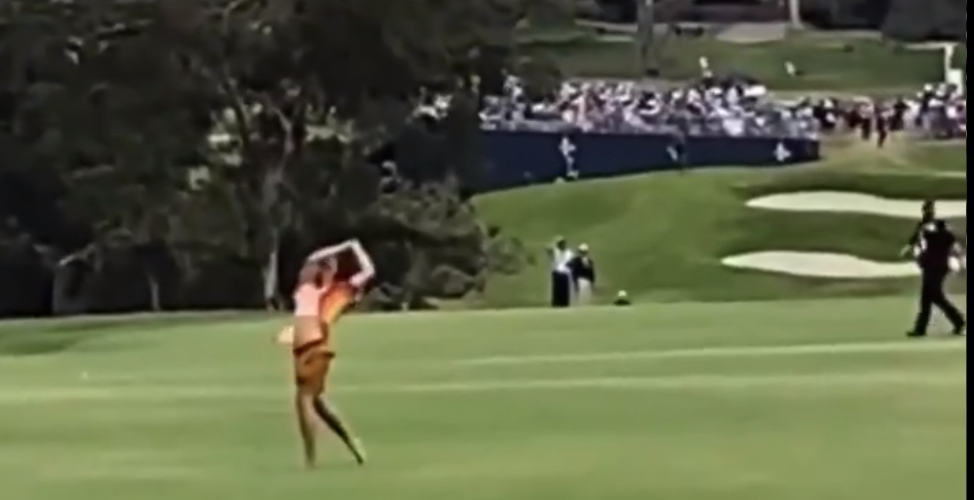 By Coleman Bentley
We’ve seen it all on Sunday at Torrey Pines. Implosions. Fireworks. A ball in a tree and the best damn free advertising Stella Artois is ever going to get. But perhaps the weirdest and wildest highlight of the afternoon was the one YOU didn’t see (a running theme with the TV coverage, it seems).

With Bryson DeChambeau and Scottie Scheffler’s group having just tee’d off on the par-5 13th, a barefoot fan in a rainbow cape lept inside the ropes and went running down the middle of the fairway, club in hand. Pulling his own golf balls from his pocket, he aimed left and let fly. To the surprise of just about everybody, the rogue contender actually had a pretty damn good swing.

Thankful to @beemerpga for doing the lord’s work videoing the 13th hole nutter at the US Open pic.twitter.com/xoUzWcQwr3

Unlike a mitt to the World Series, however, you’re not allowed to bring your own blades to the U.S. Open, and thus security was quickly on the scene to subdue the intruder.

Here’s a distant shot of the course intruder who’s gotten tackled and is now pinned down on the 13th fairway pic.twitter.com/8vaMwdrKwC

The “unruly gentleman,” as Bones McKay referred to him, is allegedly YouTuber Connor Murphy, who burned his way into the golf consciousness when he wore a rainbow ensemble and fired a 108 at a Korn Ferry Tour qualifier back in April. There he proclaimed that he was going to “win the U.S. Open!” As it turns out he didn’t—in fact, nobody seemed especially eager down the stretch—but he left his mark all the same. After the distraction, DeChambeau double-bogeyed the hole, leaving his U.S. Open defence on life support.