The Jon Rahm Express shows no sign of slowing.

A second successive five-under 67 Saturday powered the 22-year-old Spaniard to the top of the Dubai Duty Free Irish Open leaderboard alongside unheralded American Daniel Im on a picture postcard day at Portstewart G.C.

Rahm and Im are last off at 4.10pm (UAE time) Sunday in a final round where nine players, the former U.S. Open champion Justin Rose (four back) ominously among them, are within five shots of the co-leader’s -17 pace and sure to have a say in this $7 million European Tour event.

But Rahm’s irresistible power-finesse combo with driver and putter and the impetus of his rapid rise to 11th in the world rankings make him the favorite, at least with galleries at the County Londonderry links who have taken the U.S.-based Barrika professional to heart.

Rahm announced himself to the wider golfing world when he binned a 60-foot eagle putt on the final hole at Torrey Pines to clinch the Farmers Insurance Open in January. He’s gone on to record seven top 10 finishes on the PGA Tour this season, including T3 at the WGC-Mexico Championship, second to Dustin Johnson at the WGC-Dell Technologies Match-Play and T2 at the Dean and Deluca Invitational.

It continued a meritorious rise up the world rankings (to as high as 9th) for Rahm who only turned professional after the 2016 U.S. Open which he played as the world’s leading amateur, a position the former Arizona State Sun Devils player held for a record 60 weeks over two stints. Rahm forfeited his exemption to last year’s Open Championship with his decision to turn pro but managed a T3 finish in his first pro event, the Quicken Loans, enough to qualify for Royal Troon anyway. He later finished T2 at the Canadian Open, securing special temporary member status on the PGA Tour from where he picked up enough money to earn a full tour card for 2017.

The only apparent weakness in Rahm’s armour is his temperament which famously boiled over as he missed the cut at last month’s U.S. Open at Erin Hills after an earlier unwanted weekend off at The Memorial.

But Rahm, who had a T10 in his first “regular” European Tour start at the French Open last week, seems at home at Portstewart and found something in his game after the turn on Saturday as he made four consecutive birdies from No. 11 before parring his way home.

“I just told myself, it was time to make some birdies,” said Rahm of his third round turnaround.

“I kind of realised what I was doing wrong on the first 10 holes. I was a little tentative on some putts, not committed to a couple shots. They were still good but not as good as they could have [been]

“That drive on 11 kind of shifted the gear. It was a perfect drive down the center, perfect second shot that went a little bit too much through the wind, and an even better putt, and hitting three shots like that just got me going through the rest of the round.” Like Im, Rahm is chasing a maiden European Tour win in the second of the new supped up Rolex Series events with their minimum $7m purses including $1.16m for the winner this week.

The Torrey Pines experience will hold the powerful Spaniard in good stead even if he’s never lead through 54 holes.

The galleries at Portstewart will also like to see execute. Rahm admits its been like having a 15th club in the bag this week.

“It’s been unbelievable to see how the Irish crowd has kind of taken me over, right. It seems like they decided to support me like if I was one of their own, and it’s been incredible. It does help out when you have that kind of support.” 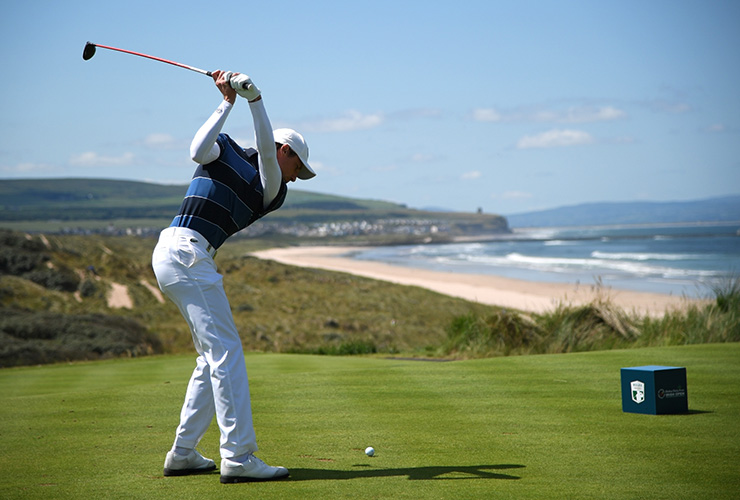 Ross Kinnaird/Getty Images
Benjamin Hebert tees off on the 1st on a stunning Saturday at Portstewart Golf Club. The Frenchman is just a shot back heading into the final round Sunday.

Not that Rahm will have it all his own way Sunday, of course.

Im, ranked 542nd in the OWGR, birdied five of his opening 14 holes and scrambled superbly at the end to shoot a 68 Saturday. He’s 12 under par on the front nine at Portstewart after making 16 birdies or better through three days, tied for the best front nine performance through 54 holes on the European Tour this season.

Most impressively Im’s needed just 73 putts all week, the fewest through 54 holes this season. It’s included 33 zero or one putts, also the best figure through three rounds this season.

Im was tied for the lead with Benjamin Hebert after the first two rounds. Hebert is a stroke behind heading into the final round after firing a 69 Saturday.

Julien Quesne and Scott Hend both shot 64s for the lowest round of Saturday and are fifth and sixth, respectively.

Everyone will have a wary eye on Rose who found a solitary fairway Saturday but still somehow managed to card a 66 with 12 greens in regulation from the 13 fairways he missed. If the Englishman can make it to the back nine in contention, he’ll draw heart from the fact he hasn’t dropped a shot on the inward nine all week.