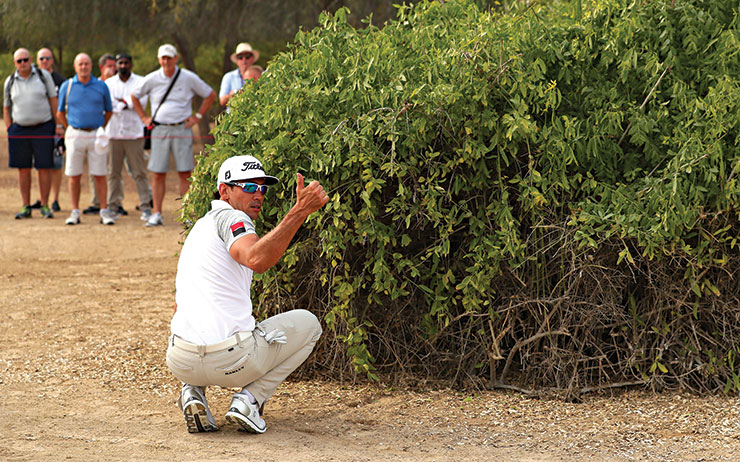 Surely it’s only a matter of time before the floodgates open for Rafa Cabrera Bello?

The sweet-swinging Spaniard is banging on the door again after a topsy-turvy 67 in the opening round of the Abu Dhabi HSBC Championship to be just three shots off early pacesetter Henrik Stenson.

Cabrera Bello has become the European Tour’s nearly-man since claiming the second of his two European Tour titles at the 2012 Desert Classic.

The 32-year-old world No.28 came into Abu Dhabi on the back of a runner-up to unheralded Australian Sam Brazel at the Hong Kong Open after racking up five top 5 finishes last season including back-to-back bridesmaid efforts at the Qatar Masters and Desert Classic. In the three seasons prior to that he had 14 top 10s.

Aren’t all the near misses driving you crazy?

“I think it’s one of those things, you just have to think sometimes many great players, much better players than myself, have gone on longer non-winning streaks.,” said Cabrera Bello who contributed an unbeaten 2½ points in his Ryder Cup debut at Hazeltine after earlier finishing fifth at the Rio Olympics.

Cabrera Bello started with a roar Thursday with three birdies in his first four holes. There were four more but the man from Gran Canaria let solo second place slip from his grasp with a double bogey six on the 13th.

“Sloppy swing. Pulled my tee shot and ended up in a bad place. I had to take a drop and just missed a short one. It was just a lot of…all of the mistakes in the round were on that particular hole. I don’t know, it’s just golf,” he said.
There’s still a lot of golf to be played in Abu Dhabi but Cabrera Bello, in a four-way share of sixth overnight alongside Tommy Fleetwood, Tyrrell Hatton and Julien Quesne, believes good things will follow what seems an inevitable victory.