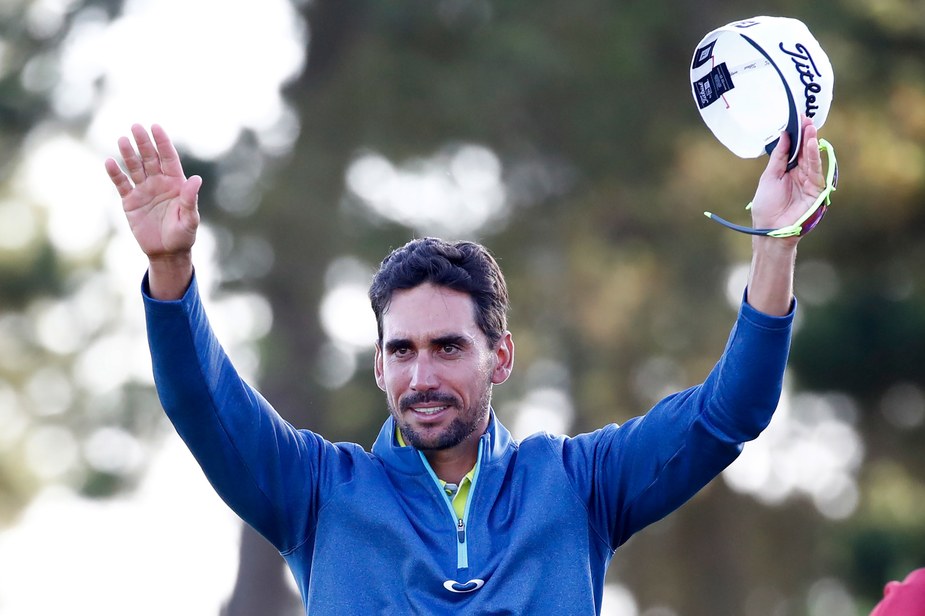 Rafa Cabrera-Bello of Spain celebrates victory on the first playoff hole of the Scottish Open. (Photo by Gregory Shamus/Getty Images)

In the end, victory in the Aberdeen Asset Management Scottish Open belonged to Rafa Cabrera-Bello. To the Spaniard went the title, the $1,166,660 first-place cheque and a massive confidence boost going into this week’s Open Championship at Royal Birkdale. But everything else—mostly sympathy—was owned by the runner-up, Callum Shinkwin.

The record book will say that Cabera-Bello shot a closing eight-under 64 over the Dundonald Links, the low round of the tournament, to first reach 13 under par, then beat the 24-year-old Englishman with a birdie at the first hole of sudden death.

But that isn’t really the story.

Playing the final hole in regulation—a 586-yard par 5—Shinkwin was left of the putting surface in two shots, with a bunker between him and the flag. The lie didn’t look great and neither did the resulting chip, which came up short. So did the next shot, a putt that gasped to a halt four feet or so from the cup. And, sadly, so did the putt for what would have been the former English Amateur champion’s maiden win on the European Tour. By an inch. Agonizingly, too, it was his first bogey of the final day.

That Shinkwin should succumb to the pressure of the occasion is perhaps not so surprising. Prior to this event his record in his second season on the European Tour consisted of four missed cuts, one withdrawal, two disqualifications, one retirement and a high finish of T-23 in 11 previous starts.

Just so you know: The first DQ at the BMW PGA Championship was the result of signing for a wrong score. The other, at the Nordea Masters, came after Shinkwin used a club he had damaged earlier in his opening round. The WD in Malaysia remains unexplained, but the “retirement” from last month’s BMW International in Germany was caused by “heat exhaustion.”

All of which was a far cry from the impressive young man from Watford just north of London who shot rounds of 67-68-72-68 over the 7,242-yard Ayrshire links and, alongside fellow last-minute qualifiers Matthieu Pavon of France and Australian Andrew Dodt, claimed a coveted spot in this week’s Open Championship at Royal Birkdale. Still, for Shinkwin that was small consolation in the immediate wake of what was clearly a huge disappointment.

“On the 18th I hit a great second shot in and finished in a divot on a downslope of the [bank of the] bunker,” he said. “I had no shot, really. But it’s all a learning curve and obviously if you win, you have to have luck on your side. It wasn’t there for me. But it’s been a very good week. End of the day, I am more than happy to finish second even if the win was on my mind. It just didn’t happen.”

In predictable contrast, the happiest man on the premises was Cabrera-Bello. For the 33-year-old Ryder Cup player, this was his first victory in more than five years—his third on the European Tour—and perhaps just reward for a long series of high finishes that more than once only just failed to bring the ultimate reward.

“I’ve won before and I have been up there so many, many times, but things have not really worked out for myself,” he confirmed. “I was starting to feel a little pressure every time I was up there contending. So I’m really, really happy how I played today. In the playoff I hit two great shots and birdie was enough. I think I was overdue.”

Another cheerful chap en route to Birkdale was the man who won the Open title there in 2008. One day after soaring to a windblown third-round 79, Padraig Harrington closed with a six-under 66 and rose to that T-4 spot alongside, amongst others, former Players champion Matt Kuchar. As ever, the jovial Dubliner had a simple and undeniably logical explanation for the sharp contrast in his fortunes.

“I played the same all the time,” he said with a smile. “I didn’t change; it was the weather. I just didn’t get the breaks yesterday. I got plenty of them today. That’s the difference in the scoring, that’s all. I holed three nice par putts today, and yesterday, I missed a lot of short ones.”

Even earlier, Open champion Henrik Stenson’s final competitive round before beginning the defense of his title ultimately ended in rather downbeat fashion. Five under par for the tournament and standing over an eight-foot putt for eagle at the par-5 14th, it seemed like the Swede might just be onto something as far as threatening the leaders was concerned. But it wasn’t to be. The putt slid past and two sloppy bogeys over the closing four holes meant a great round became merely a good one.

It was, in truth, an unsurprising end to an erratic week for Stenson. Despite making 18 birdies over the four days, he finished only four under par.

“I did hit some nice shots and a few good putts but it was case of ‘what could have been,’” he said after signing for 68 that eventually left him in a tie for 26th place. “I hit a couple of loose shots coming in and paid the price for them. I don’t feel like I’m playing great but at least I posted a good score. My game is very average at best.

“Next week is going to be special, even if I’m not really where I want to be with my swing. But I’m going to try and enjoy it all. It might be the only time I get the chance to defend the Open, so I intend to make the most of it.”