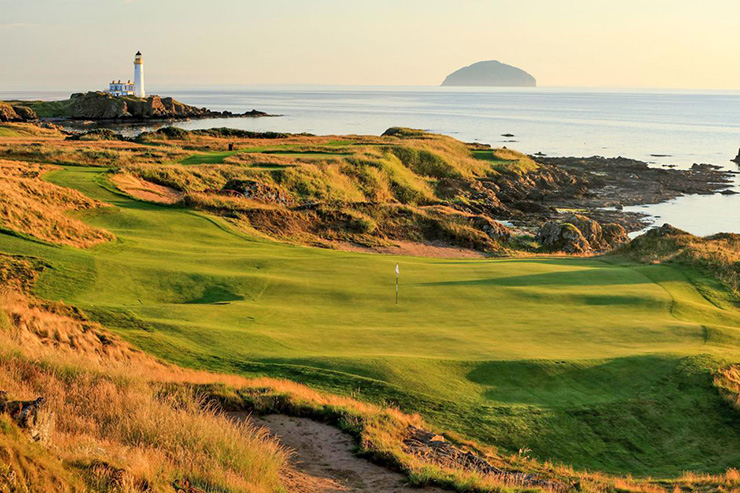 The par-3, 11th hole on the Ailsa Course at the Trump Turnberry, with the course’s famed lighthouse and the Ailsa Craig in the background. David Cannon

By John Huggan
Not since 2009 has the Open Championship been played over the Ailsa links at Turnberry on Scotland’s Ayrshire coast. And the prospects of golf’s oldest major returning anytime soon—long far-fetched given President Donald Trump’s controversial ownership of the resort—now appear even more distant. In the wake of the PGA of America’s decision to move next year’s PGA Championship away from Trump National Bedminster, the R&A has underlined its reluctance to grant what is now Trump Turnberry the opportunity to host the Open for a fifth time.

“We had no plans to stage any of our championships at Turnberry and will not do so in the foreseeable future,” said Martin Slumbers, R&A chief executive, in a statement. “We will not return until we are convinced that the focus will be on the championship, the players and the course itself and we do not believe that is achievable in the current circumstances.”

The sites of the Open Championship have already been announced through 2024, Royal St. George’s hosting this summer, followed by the Old Course at St. Andrews, Royal Liverpool and Royal Troon. The earliest then that Turnberry could have conceivably hosted was 2025, although the R&A typically returns to St. Andrews roughly every five years, which would squeeze out any other Scottish courses until closer to the end of the decade.

Trump purchased Turnberry from Leisurecorp in 2014. He attended the last major tournament played over the Ailsa, the 2015 Women’s British Open won by Inbee Park. At the time, that event was run by the Ladies Golf Union. But since 2017, when the LGU merged with the R&A, the championship has, like its male counterpart, fallen under the auspices of the St. Andrews-based organization. So it would seem equally unlikely that Turnberry will host the WBO.

Or that Trump will see Turnberry in the foreseeable future. Just last week, in the wake of rumours that the president was planning to fly to Scotland at the same time as his successor’s Jan. 20 inauguration, First Minister Nicola Sturgeon was quick to warn against any such visit.

Sturgeon said that the lockdown travel restrictions currently in place applied to the president as much as anyone else. “We are not allowing people to come into Scotland without an essential purpose right now, and that would apply to him just as it applies to anybody else,” Sturgeon said. “Coming to play golf is not what I consider to be an essential purpose.” 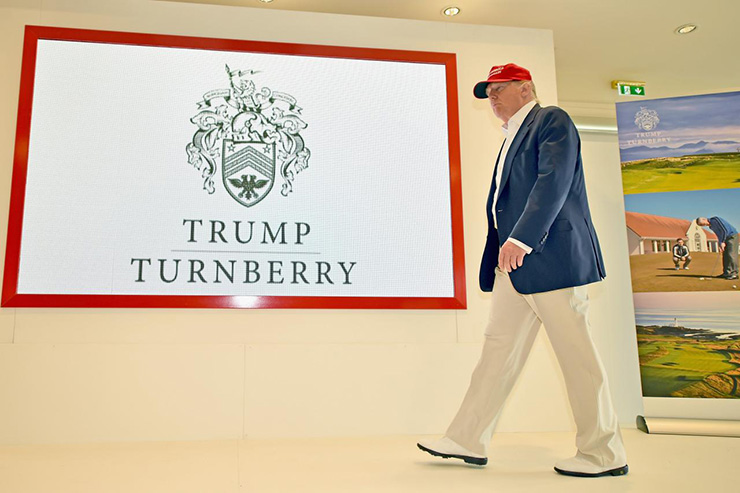 Trump attended the Women’s British Open at Turnberry in 2015 before becoming the president. Getty Images

Perhaps the most disappointing aspect of these latest developments is that the Ailsa course is much improved since Stewart Cink defeated Tom Watson in a four-hole playoff for the claret jug 12 years ago. In particular, the revamping by architect Marin Ebert of the ninth, 10th and 11th holes along the shores of the Firth of Clyde and in the shadow of the iconic lighthouse has greatly enhanced what was already one of golf’s most dramatic settings.

Sadly, however, that view will be reserved only for those prepared to pay a green fee that varies between £100 and £500 depending on the time of year. Seemingly as long as the Trump name is attached—the soon-to-be former president also owns the Trump International Golf Links just north of Aberdeen—no one in authority appears willing to play his game.