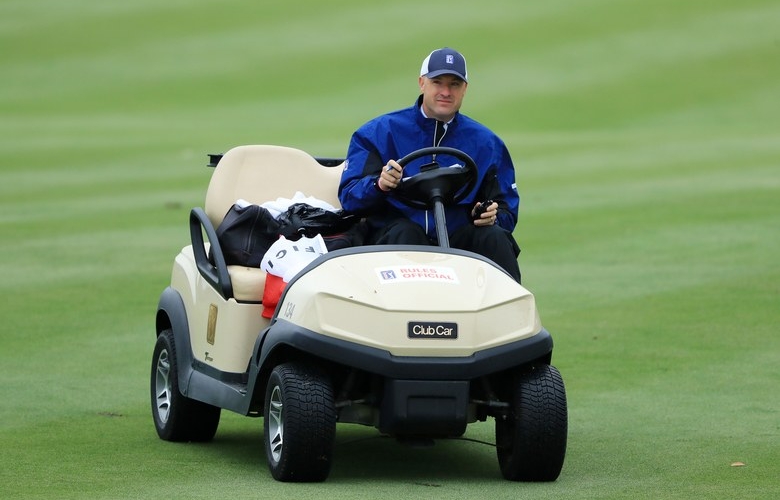 By Brian Wacker
ATLANTA — The European Tour on Monday announced a four-point plan to address the issue of slow play, one that included an increased threat at applying stroke penalties for those caught twice with bad times. It was a move that was prompted in part by a tweet from Edoardo Molinari earlier in the year demanding something be done about the game’s glacial pace, admitted the tour’s chief executive, Keith Pelley.

How then might the strategy affect the PGA Tour, which recently announced it, too, is exploring a potential expansion of its pace-of-play policy? According to PGA Tour commissioner Jay Monahan, not significantly.

“We’re on our path, and we’re on our plan,” Monahan said Tuesday from the Tour Championship. “We’re obviously two different tours, on different golf courses with different setups.

“I wouldn’t say we’re going to be influenced in any way by [the European Tour’s decision].”

Nor will the Euro Tour’s announcement cause the PGA Tour officials to, pardon the expression, speed up the decision-making process regarding changes to their policy.

Indeed, Monahan said the tour is committed to taking a measured approach toward the matter, one that it began discussing in earnest during a Player Advisory Council meeting at the Genesis Open in January. (Tour officials say they were already well down the road of looking at measures to address the issue before videos of Bryson DeChambeau meandering along at the Northern Trust surfaced.)

The conversations have continued through the season and will be a topic of discussion during the next PAC meeting in October as well.

One way the PGA Tour is considering dealing with slow play is by using ShotLink data, which has kept track of every shot—and how long each player takes to hit them—since 2003.

“We’re looking at analyzing all that and really getting a sense of where we currently stand,” Monahan said. “We’re pretty far along in that process.”

How long it will be before any changes are implemented might be another matter, though.

Slow play is not a new issue. Complaints about how long rounds take on the PGA Tour have been voiced for decades, and Monahan noted there have been nine adjustments to the tour’s pace-of-play policy since 1994.

Yet penalties have been rare. At the 2017 Zurich Classic, Brian Campbell and Miguel Angel Carballo were docked a shot in the first round of the team event. The last slow-play penalty before that was at the 1995 Honda Classic, when Glen Day was hit with a stroke.

As the European Tour’s plan will be take effect in 2020, two players familiar with ongoing internal PGA Tour discussions said they’d be surprised if a resolution is reached anytime soon.

That’s not to say the tour isn’t being earnest in its effort to figure out a solution to the problem. “Is there an opportunity to improve? The answer to that is yes,” Monahan said. “We’re committed to determining what those improvements are.”

As for what those are—and when they will be implemented—we’ll have to do the same thing we do when watching DeChambeau and many other repeat offenders: wait.