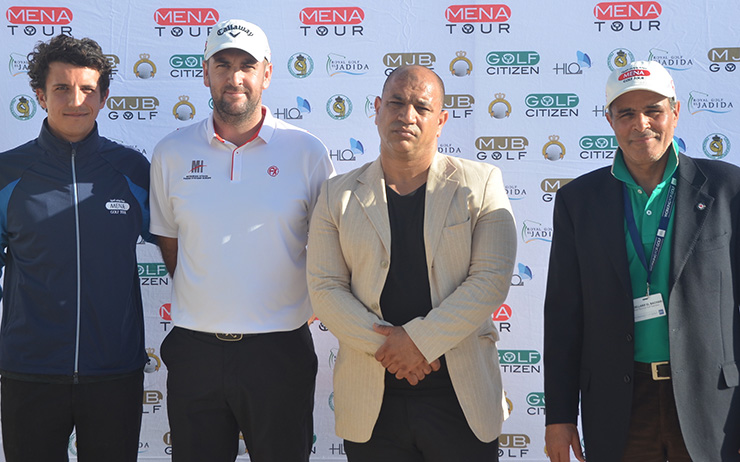 Jack Doherty will put a healthy dose of golf’s greatest commodity – confidence – on ice for a week after opting to bypass the first event of the MENA Tour season in Morocco from Tuesday.

The Scotsman (pictured second from left) won the tour’s Q-School by three strokes last week but will miss the US$40,000, 54-hole Casablanca Open which concludes at Palmeraie Country Club Thursday to attend his brother Paul’s stag-do in the United Kingdom.

Jack is expected to make his debut proper alongside Paul, a former MENA Tour winner, in next week’s Royal Golf Mohammedia Open, also in Casablanca, before teeing it up in the April 24-26 Ras Al Khaimah Classic at Tower Links, the third event of the season before a three-tournament Thailand swing.

Jack Doherty started the final round of Q-School at Royal Golf El Jadida two shots off the pace and recovered from two early bogeys to fire a three under-par 69 to finish on 216, even par.

He led a Scotland one-two with 2015 Walker Cup rep Grant Forrest carding a final round 73 to finish runner-up on +3, a shot ahead of a Spaniards Gabriel Canizares and Leonardo Axel Lilja Moyano and Englishman Paul Dwyer.

India’s Feroz Singh Garewal, who shared the 36-hole lead with Moyano, slipped into a tie of 10th on +7 after signing for a 78 while England’s Danny Poulter, the brother of Ryder Cupper Ian, finished in a three-way tie for 7th on six-over 222, a stroke behind England’s Nicholas McCarthy.

Former England cricketer Craig Kieswetter, who has set himself the target of being a regular on the European Tour, birdied two of his last four holes for a closing 75 that left him in a share of 31st at 18 over.

Elsewhere, UAE’s Ahmed Al Musharrekh finished in a tie for 53rd on 23 over after posting a final round 78 as the top 55 and ties from the final stage were awarded the MENA Tour cards for the 2017 season.

An initiative of the Shaikh Maktoum Golf Foundation, the MENA Golf Tour was created in 2011 with the aim of developing golf in the region. It is affiliated to R&A and the Arab Golf Federation and enjoys Official World Golf Ranking (OWGR) status.

Multiple European Tour starts, including the Omega Dubai Desert Classic, the Hassan II Trophy and the Maybank Championship Malaysia in addition to full playing privileges on the Sunshine Tour and exemptions into the final stage of the Asian Tour Q-School for the leading three professionals are among the incentives for the MENA Tour members.