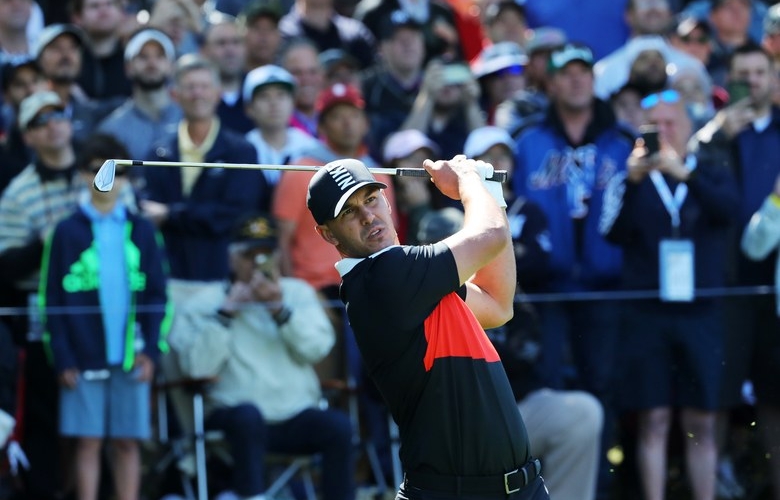 Koepka plays his shot from the 17th tee during the first round of the 2019 PGA Championship at the Bethpage Black course on May 16, 2019 in Farmingdale, New York. (Photo by Warren Little/Getty Images)

By Joel Beall
FARMINGDALE, N.Y.—Bethpage hasn’t seen a beatdown like this since the British drove Washington into Manhattan.

That’s not how this rodeo is supposed to work. It’s the Black’s job to lay the hurtin’; there’s a “Warning” sign and everything. Only Brooks Koepka decided to take that sign and snap it in half. The reigning PGA and U.S. Open champ fired a first-round 63 at the PGA Championship, and we do mean “fired.” Koepka was so hot the joint would have burned down had it not been saturated by weeks of rain.

“That was one of the best rounds I’ve played probably as a professional,” Koepka said. “This golf course is brutal.”

That might seem like it was said in jest, similar to when an opposing football coach remarks, “You have to give that team a lot of credit,” after winning by five touchdowns. Yet Koepka’s analysis rings true: Only Tommy Fleetwood’s 67 came close to matching Koepka in the morning round. Koepka was the only player to go bogey free, and his seven-under score with nearly 10 strokes better than the field’s 72.76 morning average.

Damnedest thing, it could have been lower. Koepka’s only blemish of the day came at the signature par-5 fourth. It’s the lone respite at the Long Island venue, a hole that (as of writing) surrendered 46 red figures and just six bogeys or worse. But Koepka sailed his drive into fescue and chunked a chip around the green. These mistakes lead to..a par.

“And then 13 I can get there, too, I just hit it in the bunker,” Koepka reminded on Bethpage’s other par 5. “And then the second hole today, my 11th hole, I missed about a five-footer. That would have been nice to shoot 60. I guess that would have been pretty good.”

But the shock isn’t that Koepka turned Bethpage into Bellerive. It’s that he’s made such masterpieces a habit.

There have been pundits who claim Koepka is a good player on a great run. Please. Dustin Johnson winning threes straight tour events? That’s a streak. Justin Thomas capturing six wins in a calendar year? A heater. Koepka’s major performance over the last five seasons? That’s not a run, that’s routine.

Yes, five seasons. Koepka’s three titles and a runner-up in his last seven tries have vaulted him to the sport’s upper echelon, yet somehow fails to encapsulate his success. Starting with a T-10 at the 2015 Open Championship, Koepka has 11 top-15 finishes in his past 13 major starts. Throw in a T-4 at the 2014 U.S. Open, he boasts nine top 10s. Anyone thinking Koepka is riding a wave is ignorant or brazenly obtuse.

That production is a notch below the primes of Jack Nicklaus and Tiger Woods . . . but right in line with the primes of Arnold Palmer and Tom Watson, who boast 15 majors between them. Whatever blasphemy that may convey, the record books back it up. In fact, should Koepka win the Wanamaker, he’d join Tiger, Jack, and Ben Hogan as the only modern-era golfers to win four majors in an eight-appearance stretch.

Dustin Johnson and Justin Rose have played hot potato with the No. 1 ranking, and Rory McIlroy, statistically-speaking, has been the best player on the PGA Tour this season. However, golf’s 46-tournament schedule is judged by a four-week prism, and through that vantage point, Koepka has no present rival but history.

And, here’s the scary part if your a Koepka competitor: He may not be in his prime yet.

“I think I’m still learning, understanding my game, and I’ve figured it out, and I think over the next few years, I’m excited for what’s to come,” he said. 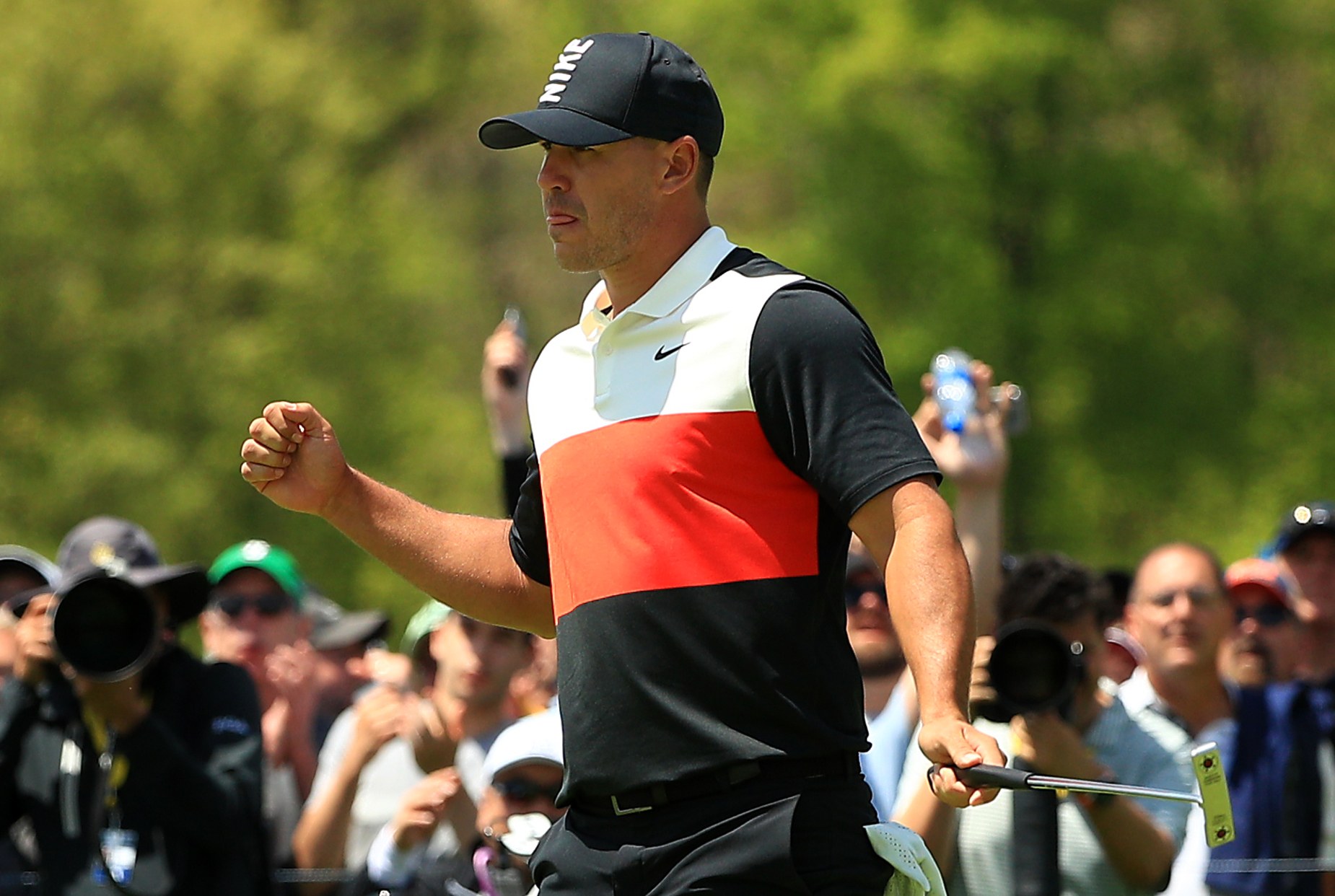 Koepka turned 29 this month. Palmer didn’t win his first major until 28. Phil Mickelson, 33. Though arguments can be had when a golfer “peaks,” there’s no debate that careers, thanks to training, medical and equipment advancements, have been extended longer than ever. Moreover, Koepka’s game is more than the blunt-force trauma it’s often portrayed. Say what you will about Erin Hills and Bellerive, but you don’t win at Shinnecock without creativity, precision, and a short game. Ditto his run at the Masters this spring. Sentiments that apply at Bethpage.

Long as it may be, the emphasis is on accuracy and approach, challenges Koepka answered on Thursday hitting 64.2 percent of fairways and 14 greens. And when he does miss the fairway, Koepka’s angle of attack is so steep—Trackman measured his 6-iron at -9.0 compared to the tour average of -4.1—that its effect is mitigated. Power may be an asset, but it’s far from the only tool in his box.

“(Bethpage) tests every asset of your game,” Koepka said. “You’ve got to drive the ball straight. It’s long, so you’ve got to hit it far and really position yourself with some of these shots in. You can’t miss, you can’t take a shot off, and that’s what I love.

“I think that’s why I play so well at U.S. Opens, this golf course, typical U.S. Open golf course. I mean, if you don’t have a good day, you can very easily shoot five, six-over. There’s a fine line between five, six-over and a couple under out here. It’s a fun golf course to play, that’s for sure.”

Better yet, Koepka—who has banged the disrespect drum whenever he can—feels he’s getting his long-awaited acceptance. His caddie, Ricky Elliot, said this is the first time he can remember when Koepka wasn’t feeling slighted. Koepka reiterated the point. “I’ve opened up. I’m being me, so I’m happy with how I’m, I guess, communicating a little bit better. I feel like I’m finally in a good spot now to say things that I probably couldn’t say before or was maybe afraid of.”

The chip on his shoulder that supposedly fueled Koepka’s success? Perhaps it was actually weighing him down.

So here we are, Koepka’s game, confidence, contentment soaring, and the question now isn’t if he’ll keep it up but how high he’ll go. Earlier this week, the man himself gave us an indication.

“I don’t see why you can’t get to double digits (major wins),” Koepka said. “I think you keep doing what you’re supposed to do, you play good, you peak at the right times. Like I said, I think sometimes the majors are the easiest ones to win. Half the people shoot themselves out of it, and mentally I know I can beat most of them, and then from there it’s those guys left, who’s going to play good and who can win.”

Said into a microphone, the goal seemed ambitious. Watching him slice one of the world’s toughest courses into pastrami on Thursday, it doesn’t seem so far-fetched.