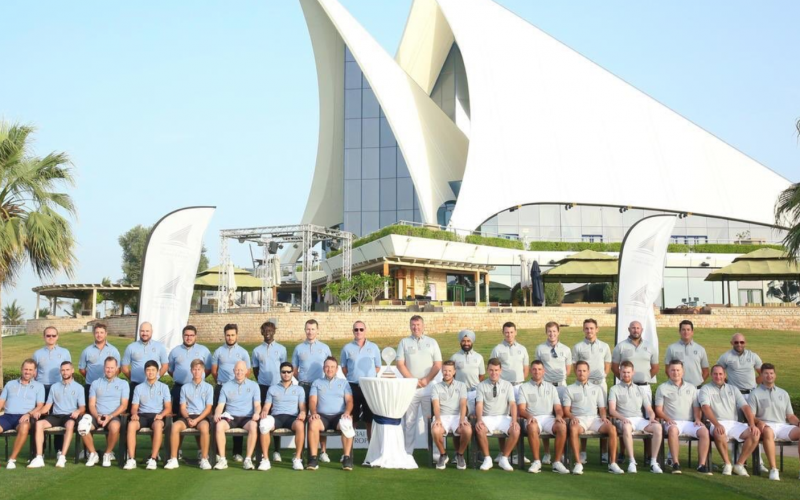 By Kent Gray
Respective captains Tom Buchanan and Craig Vance have lead from the front as the 20th Dubai Golf Trophy looks set for a nerve-jangling climax at Emirates Golf Club on Sunday.

Buchanan will have slept slightly easier with the UAE PGA professionals heading into Sunday’s 16 singles matches on the Majlis with a 9-7 lead as they look to avoid a fourth successive loss in the Ryder Cup-style matches.

The Al Ain Equestrian, Shooting & Golf Club pro teamed with UAE PGA chief executive Luke Plumb for back-to-back wins over UAE national team amateurs Ahmad Skaik and Khalid Yousuf, 2&1 and 3&1 in the Saturday’s foursomes and fourballs at Dubai Creek Golf & Yacht Club respectively. But the heat will remain in the UAE pros given the amateurs dominance since 2016, even though the pros lead the overall Dubai Golf Trophy count 15-4 dating back to the year 2000.

Vance and vice-captain Steven Kelbrick join Buchanan and Plumb as they only players with two points each heading into Sunday. They edged Shane Peacock and Ross McArthur 1 up in the foursomes and 3&2 in the fourballs.

Bayhan Lakdawala and Max Burrow are undefeated thanks to a birdie three on the Creek’s notoriously tricky 18th by Lakdawala which enabled the duo to earn a half with Ryan Smith and David Gray in the fourballs after they’d earlier edged the pros 2&1 in the foursomes.

Partnering Bradley Mogire, Mike Mezei also recorded a final hole birdie to earn the amateurs another critical half in the fourballs against Michael Major and Joe Way.

Four UAE PGA pros will also go into Sunday with 1.5 of a possible two points:  Adam Burwood, Jack Woods, Sujjan Singh and Michael Bolt. Burwood and Woods won their last hole in the foursomes to earn a half with Bilbo Perrot and Stephen Loftus while Singh and Bolt lost their final hole, also in the morning foursomes, to half with Zi Ang Xu and Nathan Fisher.

Here’s the draw for Sunday’s singles:

And the results from Saturday:

History, some long since parked and a result still fresh, hints against Maha Haddioui breaking her LET duck this week but the Arab trailblazer insists she can’t lose either way.