Presidents Cup 2017: 9 interesting facts you should know about the construction of Liberty National 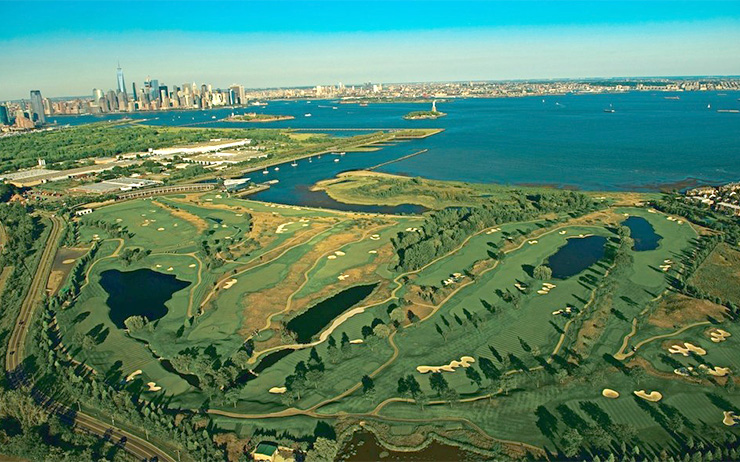 JERSEY CITY, N.J. — Given the proximity to New York City and the past land use on the site where Liberty National Golf Club was constructed, the site of this week’s Presidents Cup is a fairly unique setting to host a big-time golf event.

This is a golf club built unlike most others, as these nine facts can attest.

1.) The total cost to construct Liberty National? $250 million. As a past oil terminal infiltrated with petroleum, lead and toxic waste, almost 90 percent of that $250 million comes from the cost of a Superfund clean-up, reported by our Architecture Editor Ron Whitten. Taxpayers took most of the cost.

2.) Yes, the cart paths are really worth more than $1 million. Unlike most golf-course cart paths made from asphalt or concrete, Belgian block pavers were imported for use here at LNGC. Each paver was individually installed around the entire golf course, driving up the cost of construction and complexity of installing it.

“You really don’t see that anywhere in the United States anymore,” says Jon O’Donnell, the president of Heritage Links, which led construction at Liberty National.

Usually, it takes three to four months to install the cart paths on top of a sodded golf course, he says. But at Liberty National, there was a cart-path subcontractor who followed the course builders to build the paths right away.

3.) 6 million cubic feet of sand and earth was imported for the golf course. To put that in perspective: Workers dumped 200 truckloads of dirt every day for two years straight to fill the site. That’s a lot of soil. That sand was imported from the Jersey Shore, according to the owners Paul and son Dan Fireman. 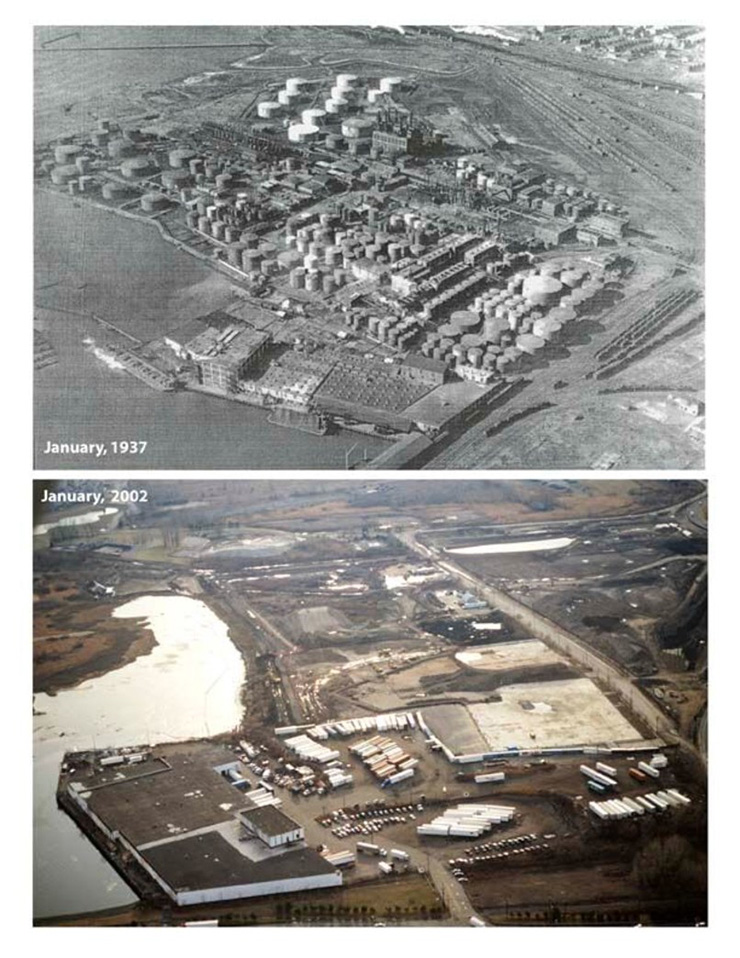 4.) It took 20+ years to fill the site. As our Ron Whitten described in his Presidents Cup preview piece, Liberty was “built like a giant layer cake, capping the site first with impervious fabric and clay, then soil, then sand, contouring the holes to make certain no pipe or tree root would ever pierce the contamination cap.”

The land was used by the military in varying degrees during World War I and World War II. Ammunition and rail yards were on this site during WW1, and in WW2, Liberty National’s land was actually used as a prisoner of war camp. How’s that for unique?

According to Heritage Links officials, in the late 1980s, the London and Scottish Marine Oil Company purchased the rights to the site, which included large environmental fees, and began to look into projects to redevelop the land. The Firemans purchased the land in 1997.

5.) It took just 10 months to construct the main aspects of Liberty National. After years of capping soil and ensuring all land was up to environmental standards, construction started in Fall 2004 and completed in September 2005.

Though 10 months isn’t atypical to finishing building a course, there were extreme measures taken to make sure the course stayed on schedule.

And builders worked through the winter: 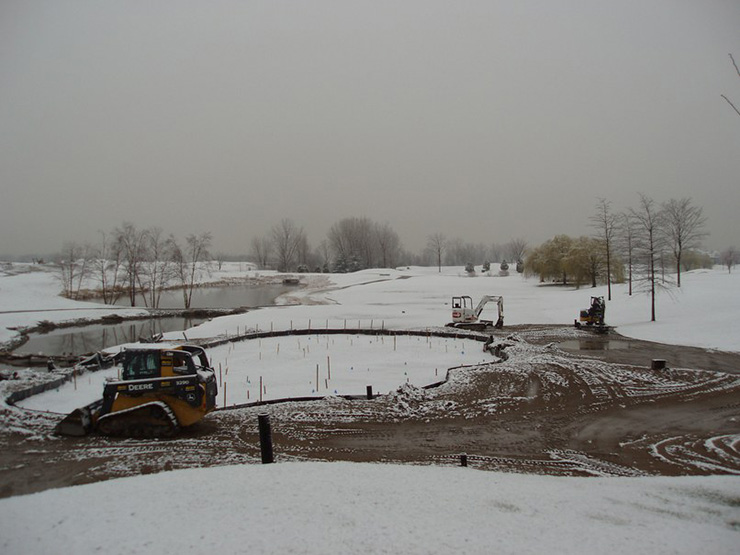 6.) 100+ workers worked long hours on the construction of the course. This was not typical of most of the 300 other projects that O’Donnell and Heritage Links have been involved in.

“It was not uncommon to have two shifts of personnel working many hours each day for seven days a week to ensure the owner’s goal was met,” O’Donnell says.

“As we got into the middle of 2005, I could not believe the amount of hours our teams were working on the project. (Dan) Fireman wanted to see it done in 2005 so he could open it in 2006. So we beefed up our resources and man hours and got it completely planted and sodded and so forth at the end of 2005 so he could open in 2006.” 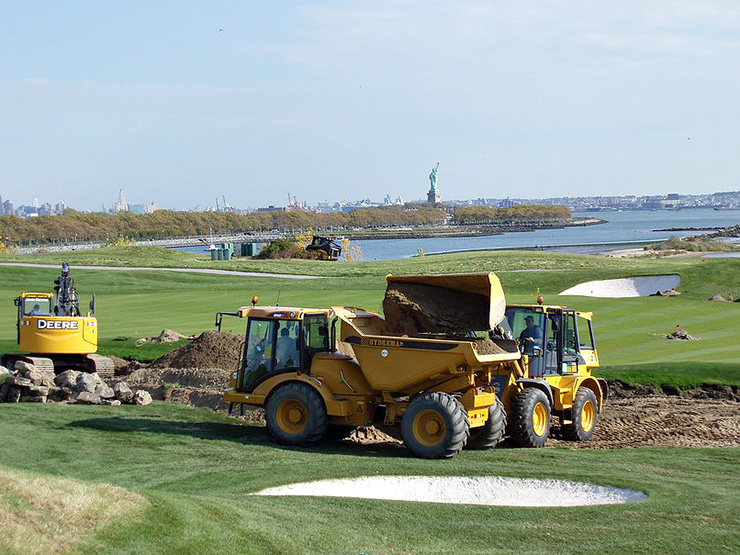 7.) The course opened on July 4th, 2006. Almost 10 years after the Firemans purchased the land, the club opened. The Fourth of July was a fitting opening date given the site overlooks the country’s biggest city.

It really does feel like you could touch the Statue of Liberty as you’re putting out on the 14th green. And in actual distance it’s not very far — about the length of two medium-distance par 4s.

The short par-3 14th and its panoramic views will be the 10th hole for the playing of the Presidents Cup.

9.) There are 5,200 sprinkler heads on the course. And due to initial environmental regulations, a lot of the course’s drainage pipes were installed before construction of the course started, not giving builders — and architects Tom Kite and the late Bob Cupp much flexibility as they built the course. 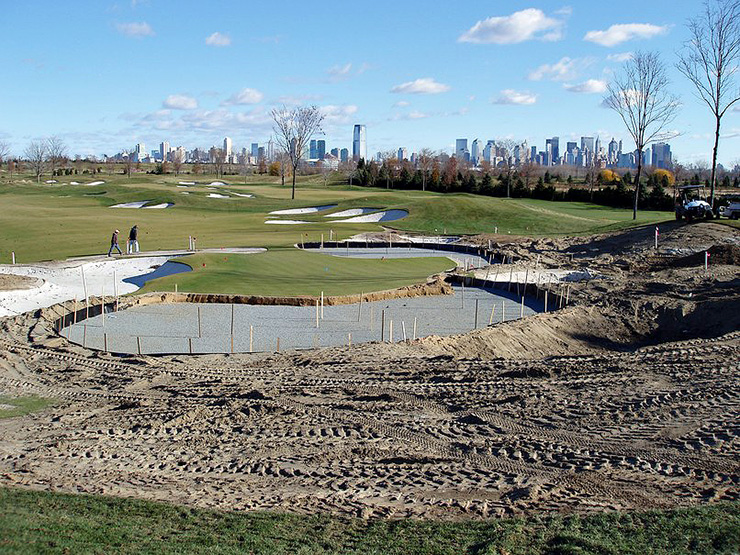 Work being done on the course’s eighth green.

“There were a couple cases where Bob Cupp and Tom Kite wanted to maybe change some bunkers or make something slightly deeper,” O’Donnell explained, “and we were pretty impacted by the fact that we couldn’t do many changes because of what was underneath the site. 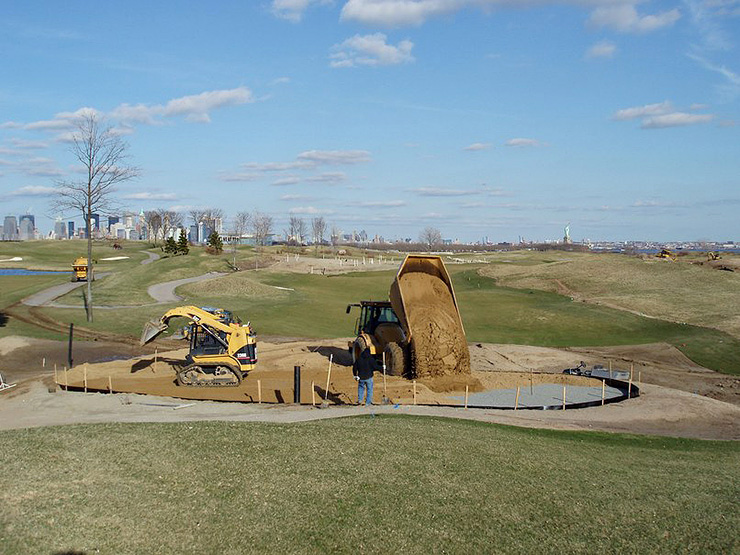 Liberty National’s third green has a done of undulations, being built here.