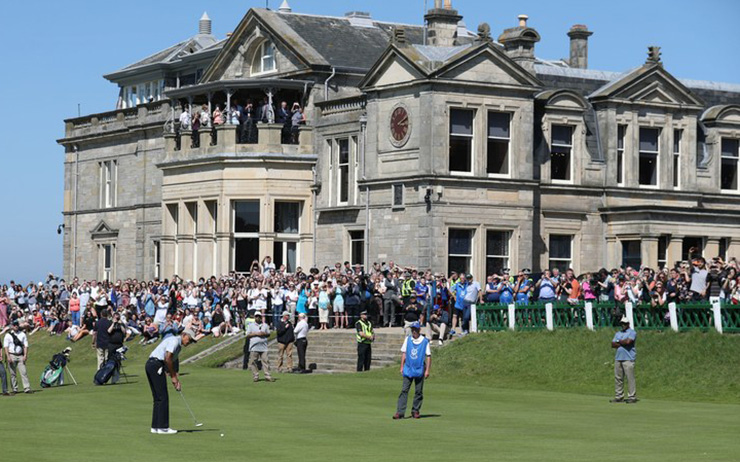 While the current president’s European outing is off to a troubled start, a former commander-in-chief’s overseas excursion has a slightly different tune. In Scotland on a personal trip, Barack Obama found time to make a journey to the home of golf on Thursday, playing the Old Course at St. Andrews.

No. 44 teed off to a gathering of spectators, receiving a round of applause:

After the the third hole, Obama took time to shake hands and speak to the crowd. Before his next shot, his caddie told him, “No pressure, sir,” to which Obama replied, “Well, going by those shots I shouldn’t feel any pressure.”

Famously a golf addict, Obama recently joined Robert Trent Jones Golf Club in Gainseville, Va. He logged over 300 rounds of golf while in the White House, a frequency that drew its share of criticism from opponents. (Although it’s worth noting that figure is on pace to be doubled by Donald Trump.)

Obama spoke at a £5000 charity function in Edinburgh on Friday.

Main image caption: Former US president Barack Obama putting on the 18th green as he plays a round of golf at the Old Course in St Andrews, Fife, during his visit to Scotland. (Photo by Andrew Milligan/PA Images via Getty Images)