Poulter struts his stuff with opening 67 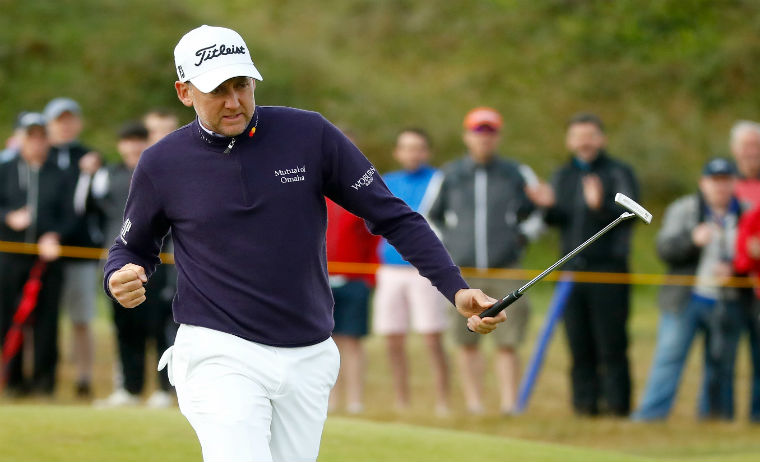 Thomas Bjorn apparently detected Ian Poulter’s trademark strut return for the first time in a long time at the Scottish Open and promptly tipped him to win this week’s Open Championship.

“Didn’t know I was a strutter,” the revitalised Ryder Cup talisman retorted after being alerted to observation made by Europe’s new captain for the 2018 matches at Le Golf National near Paris. There was no resistance to Bjorn’s hot Birkdale tip mind you, so lets settle on a swagger and call it even.

Whichever way you look at it, Poulter’s early 67 Thursday has the Englishman nicely poised ahead of the wild weather that is expected to play such a pivotal role in the outcome of the 146th Open. It wasn’t bad for a player who had to go through qualifying to even reach Royal Birkdale, and certainly beats last year’s Open at Royal Troon where Poulter had a stint behind the microphone.

“Commentating last year on Thursday and Friday was no fun,” said Poulter who was restricted to  just 13 events in 2016 and missed Europe’s Ryder Cup reserve at Hazeltine thanks to a foot injury

“Obviously it’s quite nice to obviously go through qualifying, to go out there, post a red number today, when the last time I played here in 2008 was a pretty good 69 on a tough day, as well.”

Nice indeed. The 41-year-old “obviously” has good vibes around Birkdale after finishing runner-up by four shots to Padraig Harrington the last time the Open was played over the Southport links.

“The Players Championship (third place) was a big week for me. I think that was a huge turning point. I’m definitely a freer player on the golf course. I can be more aggressive. I can hit more of the shots that I’m kind of visualising, and I think I’ve done a lot of good work with Pete and even with myself on camera to look at — try to maintain a consistent level of ball-striking and it shows.

“Obviously I was in position last week, didn’t finish it off [T9 at the Scottish Open at Dundonald Linls], and I’ve come out strong again this week. So hopefully we can continue that form over the next three days on a golf course that’s a very good and strong Open Championship venue.”

Poulter has never been shy of the spotlight, indeed he thrives on it. But the write off that was 2016 clearly seems to have made him more determined, if that was possible.

“I’ve definitely had some low spots in the last 18 months. And certainly 12 months, I was getting very down. It’s easy to be down when you feel you’re a great player and all of a sudden you’re hampered with a bit of injury. You’re not getting the results you want. It’s very easy to slide away,” he said.

“So I’m proud of the way I’ve been able to refocus, get things back on the straight and narrow, clear away some of the noise in the background, and get back to really focusing hard on what I need to do to get the level of golf back that I think I can play.”

Poulter punched his ticket to Birkdale by claiming one of three spots in final qualifying at his home Woburn GC with scores of 70-68. He admitted shock at the number of folk who came up to congratulate him on even attempting to qualify.

“If you’re in a position to try and qualify for the best event in the world, then you should make the effort to go and do it. They are giving three spots away, and there is a great opportunity to get in this championship and obviously go on and hopefully win it.”

The Birkdale galleries could well be a 15th club in Poulter’s bag this week, sitting alongside  the putter he’d determinedly wielding more aggressively after three three putts in his final round at Dundonald.

“Absolutely incredible crowds today. The Open Championship is extremely special from a fan perspective and from a player to be clapped on to every single green, it means a lot.

“Players love playing here. They love playing in The Open, and spectators respect that, as well. And they really make you feel great out on the golf course, and I felt that today. They definitely gave me a little bit of a buzz. And they gave me a bit of energy on the greens, as well.”

Yes, the swagger is back although Poulter knows there is much tough work to come with what will surely be a familiar refrain in the media centre Thursday.

“Tomorrow [Friday] is going to be brutal. And today was — it was good to post a red number, considering what we’ve got coming tomorrow.”