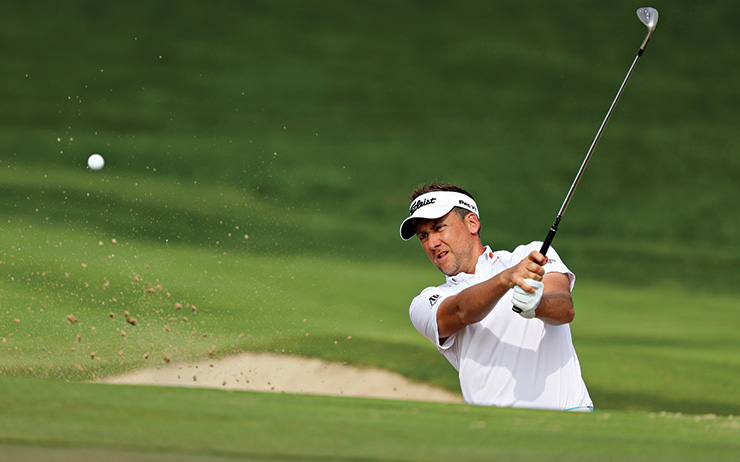 The 42nd Ryder Cup matches in Paris might still be 19 months away but it’s never too soon to get excited about European talisman Ian Poulter flirting with the front page of leaderboards again.

A hot putter helped the 41-year-old Englishman to an opening five-under 67 Thursday and a four-way share of fourth place heading into the second round of the 28th OMEGA Dubai Desert Classic.

After an injury-blighted 2016, it was an encouraging start to 2017 in more ways than one.

Poulter last played Dubai in 2008 (T47 at -4 with rounds of 72-67-72-73) so has had to reacquaint himself with the Majlis course this week. After taking advantage of the three par 5s on the course’s outward nine (Poulter’s front nine after teeing off the 10th early), it was like he’d never left Emirates Golf Club.

As well as birdies on the 10th, 13th and 18th, there were additional gains on 15 and 16 to cancel out a bogey on the tough 12th. Poulter rattled off eight straight pars coming home before rolling in his sixth birdie of the day on his final hole, the 9th.

The 67 won’t have gone unnoticed by new European captain Thomas Bjørn who must hope Poulter will be brandishing clubs at Le Golf National in 2018 rather than a vice-captain’s earpiece as he did in Europe’s 17-11 loss at Hazeltine last September.

Poulter was obviously delighted to get 2017 off to a fast start.

“I’d be pretty happy with that. Haven’t been here for nine years. Spent a week off [between a T39 finish in Abu Dhabi and Dubai] practicing, so it’d have been tough to have walked off not shooting a good round today,” he said.

“I think the whole game was solid. I didn’t miss many fairways, and I think the mid-iron shots I hit were pretty good. And obviously you know, the putter was working. I holed one pretty decent-length putt and the rest were opportunities that I would have liked to have converted and I did that quite nicely.

“So I think the putting is just about coming back and that’s obviously a nice feeling.”

Asked if his injury-enforced layoff last year had unwittingly reinvigorated his game, Poulter admitted he “felt fresh” before offering the type of fighting words you associate with a player like, well, Poulter.

“I’m not sure I’m hitting my stride just yet. As well as I played today, I think there was still a couple of mis-hits in there. And the perfectionist I am, I want to eradicate those, and when I do, we’ll start to shoot some real low rounds of golf.”

Off the first tee at 12.15pm Friday in what are forecast to be high winds, anything around par won’t hinder his title chances.  You wouldn’t bet against something lower either. We’ve come to expect the unexpected from the Hertfordshire hero.