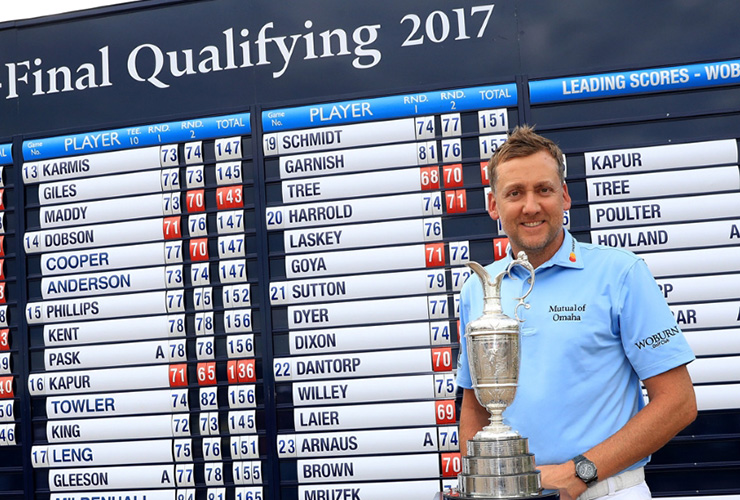 Ian Poulter earned a return to the scene of his most memorable major performance as the final 15 spots for the 146th Open Championship at Royal Birkdale were filled Tuesday.

The European Ryder Cup legend clinched one of three spots in final qualifying at his home club of Woburn after carding rounds of 70-68. It sets up a return to Royal Birkdale where he finished second to Padraig Harrington in 2008.

“Job done,” the 12-time European Tour winner told TheOpen.com. “Obviously going back to Birkdale after what happened in 2008 is special. You know I thought I had that 15-foot putt (on the 72nd) to maybe win or get in a play-off and then my Irish friend (Padraig Harrington) decided to go bananas on the last five holes.

Job done today @WoburnGC securing a spot in @TheOpen. Woburn was magnificent as always. @JackSinghBrar is going to be a star. Well played. pic.twitter.com/UdhKA8Qmnn

“It was a great week, my best in a major. All my family and friends were there to see me play and after I finished Katie told me she was pregnant with Lily, so it was happy days that week.”

Poulter now has the Dubai Duty Free Irish Open starting at Portstewart GC Thursday and next week’s Scottish Open at Dundonald to prepare for the year’s third big.

“I would say Birkdale is my favourite Open venue because of 2008 and I’m looking forward to competing there. It’s going to be a busy run. It will be my fourth tournament in a row but it’s about managing my energy levels. But as soon as I get there I will be pumped for the week.”

India’s Shiv Kapur, who made a special 4167-mile round trip from his home in Delhi to play, took the top spot at Woburn with scores of 71 and 65 for an -8, 136 total. England’s Toby Tree earned a start in the biggest championship of his career by tying Poulter for second on six-under-par.

Sweden’s Jens Dantorp left Woburn frustrated after receiving a two-shot penalty for having 15 clubs in his bag on his opening hole of the day before going on to finish one shot outside the qualifiers, TheOpen.com reported.

The Englishman won at Sunningdale in 20145 before going on to miss the cut at Royal Liverpool. He failed to qualify for St Andrews the following year and instead spent the week of The Open in recovery from a testicular cancer operation.

Southgate made an emotional return to The Open with a T12 finish at Royal Troon last year, just missing out on an automatic trip to Royal Birkdale.