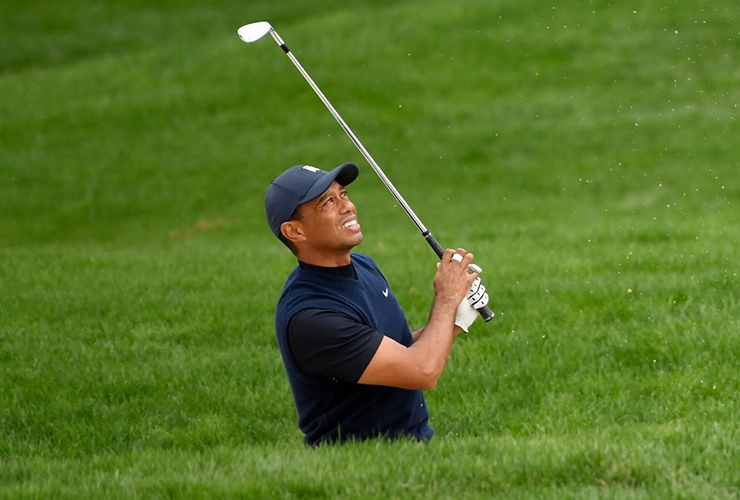 Tiger Woods plays a shot from a bunker on the 10th hole during the third round of the Zozo Championship. Harry how

By Daniel Rapaport
If Thursday’s 76 was terrible and Friday’s 66 was terrific, Saturday was … meh.

Tiger Woods trudged his way to a one-under 71 on Saturday at Sherwood Country Club, a round that did not see him gain much ground at the Zozo Championship, where birdies seem to be just as common as pars.

“It wasn’t very good,” Woods said. “I hit a lot of balls left today and made the round a lot harder than it should have been. The golf course is playing a little bit harder, but jeez, it’s still gettable. Obviously, there’s a lot of low rounds and I wasn’t one of them.”

At three-under 213 for the tournament, Woods will not come anywhere close to repeating as a winner here, albeit last year’s victory came a good 5,400 miles away in Japan. And he will not add another victory at Sherwood, where he won his foundation’s event five times between 2000-2013.

Woods began Saturday’s round at the 10th, one of the easiest holes on the PGA Tour, and made bogey for the second straight day. A birdie at 11 had him back to even for the round, and he added another at the par-5 13th, the product of a perfect spinny pitch and an eight-footer right in the centre. A birdie on 8 got him to two under for the round and a second straight round in the 60s appeared likely. But Woods could not muster another birdie the rest of the round, and a chunked chip at 3 led to his lone bogey on the backside.

On the very next hole, Woods hit one of the best short-game shots of the year. Golf is funny in that way. He tugged his approach well left on the fourth hole, his ball finishing in heavy rough behind the low-hanging tree that guards the left side of the green. In other words: dead.

Nah. Woods made a full swing with the lob wedge, sent it over one branch and under another, landing it on the very edge of the green and eventually tapping in for a wild par.

“It all worked out great and had a simple tap-in, easy 4,” Woods said with a smile.

Sunday’s final round will offer little more than an opportunity to iron out some of his ball-striking woes—Woods struggled with a pull all day on Saturday, particularly strange because he was blocking shots on Thursday—ahead of the Masters, which inches closer with each passing day. Despite Woods leaving open the chance he could play in Houston the week before Augusta, he hasn’t competed immediately before the Masters in 20 starts as a pro.

“I think obviously I’m not even close to even getting in the top 10, but if I can just play well shot for shot and build on what I had yesterday,” Woods said. “You know, if I can do something similar to what I did yesterday, I’ll have a lot of positives. As I said, I flushed it today, the ball was just starting left.”

That, and a tee time with his greatest rival: Phil Mickelson.

Woods and Mickelson are both at three-under 213 for the tournament, and even if both shot 59, they still might not finish in the top 10. But that won’t damper the excitement much. Anytime the two legends—with 20 combined majors and 94 combined years on this earth—tee it up together at this stage of their careers … well, a fan can’t ask for much more.