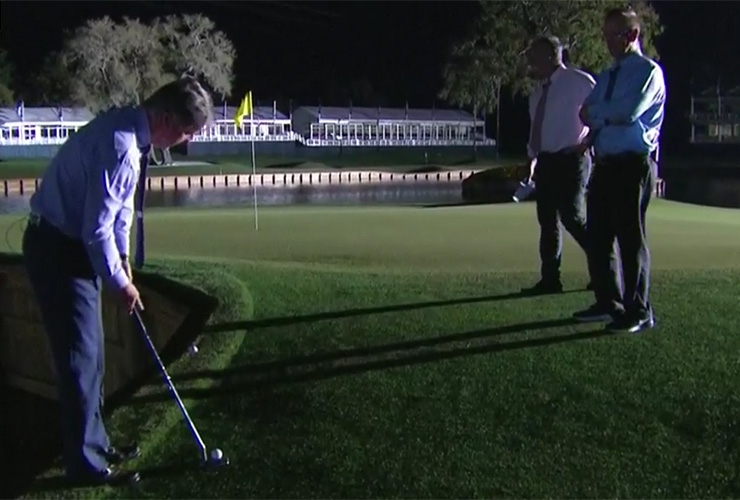 By Alex Myers
In a recent Golf Digest story, PGA Tour pros and caddies gave their thoughts on re-teeing or playing from the drop area after finding the water on TPC Sawgrass’ 17th hole. Neither is a fun option, particularly for a player having to gather himself after taking a penalty that will undoubtedly be, um, splashed across NBC/Golf Channel’s coverage. But what if we told you there’s a little-known third option? And it’s one that could have potentially saved Tiger Woods’ tournament chances on Friday.

Long after Woods carded a second-round 71 that included a disastrous quadruple bogey on the infamous par 3, Golf Channel’s Brandel Chamblee, David Duval, and Frank Nobilo broke down a different drop Tiger could have taken. Since his ball landed on the green and rolled through an area marked with a yellow penalty area line before trickling into the pond, Woods could have played his third shot from the walkway that leads to the island green. And he could have walked away making a much, much better score than 7.

Although usually, this option would make for a similarly tricky shot as the 80-yard pitch Woods opted for, with a back-centre pin, Chamblee explains that Woods could have wound up with about a 30-foot par putt through the fringe. Instead, he one-hopped his shot from the drop area into the pond as well, and until 4:30 p.m. on Friday, his two Bridgestones were the only golf balls that got wet on a day when the hole played easy to a 2.92 stroke average. Anyway, here’s the late Friday segment from Golf Channel’s Live From:

And here’s a photo Chamblee posted of the potential par putt Woods could have had:

Preparing for our segment last night, I sent this pic to the rules official to make sure we had it right. Tiger could have had a 30 foot putt for par through the fringe on 17 yesterday. The most dangerous hole in golf addles the brains of all us sooner or later. pic.twitter.com/0UKOGWNN60

In the clip, Duval says he reached out to Tiger and that he told him he wasn’t aware of that option. Ouch. Within two shots of the lead at the time, Tiger tumbled off the leader board and will enter the weekend nine shots behind leaders Rory McIlroy and Tommy Fleetwood.