By Stephen Hennessey
One of the most highly anticipated golf-course openings in 2017 is Streamsong Resort’s Black course, which is set to open September 29. Gil Hanse and his design team, one of the most sought-after among course-architecture firms, completed the design, which joins Bill Coore and Ben Crenshaw’s Red course and Tom Doak’s Blue course, both among Golf Digest’s Second 100 Greatest, as the next course at the Florida resort.

So what should we expect from Streamsong Black? The rolling scale of the property, which will play to a par 73, is certainly unique among big-time designs (only two courses in Golf Digest’s 100 Greatest and Second 100 Greatest are par 73s: Garden City Golf Club, No. 46 on our last 100 Greatest ranking and Kapalua’s Plantation course, No. 112).

And most notably is the way in which Hanse, his design partner Jim Wagner and the rest of his team were inspired by the look and feel of Australian Sand Belt courses and their bunkering to incorporate similar looks in Florida.

Hanse, whose Rio Olympic course design hosted last year’s Olympics, and who has worked on redesigns for some of the country’s most prestigious clubs, such as Winged Foot Golf Club, Merion Golf Club and Los Angeles Country Club, answered five questions about Streamsong Black and his other projects from Golf Digest’s Stephen Hennessey. 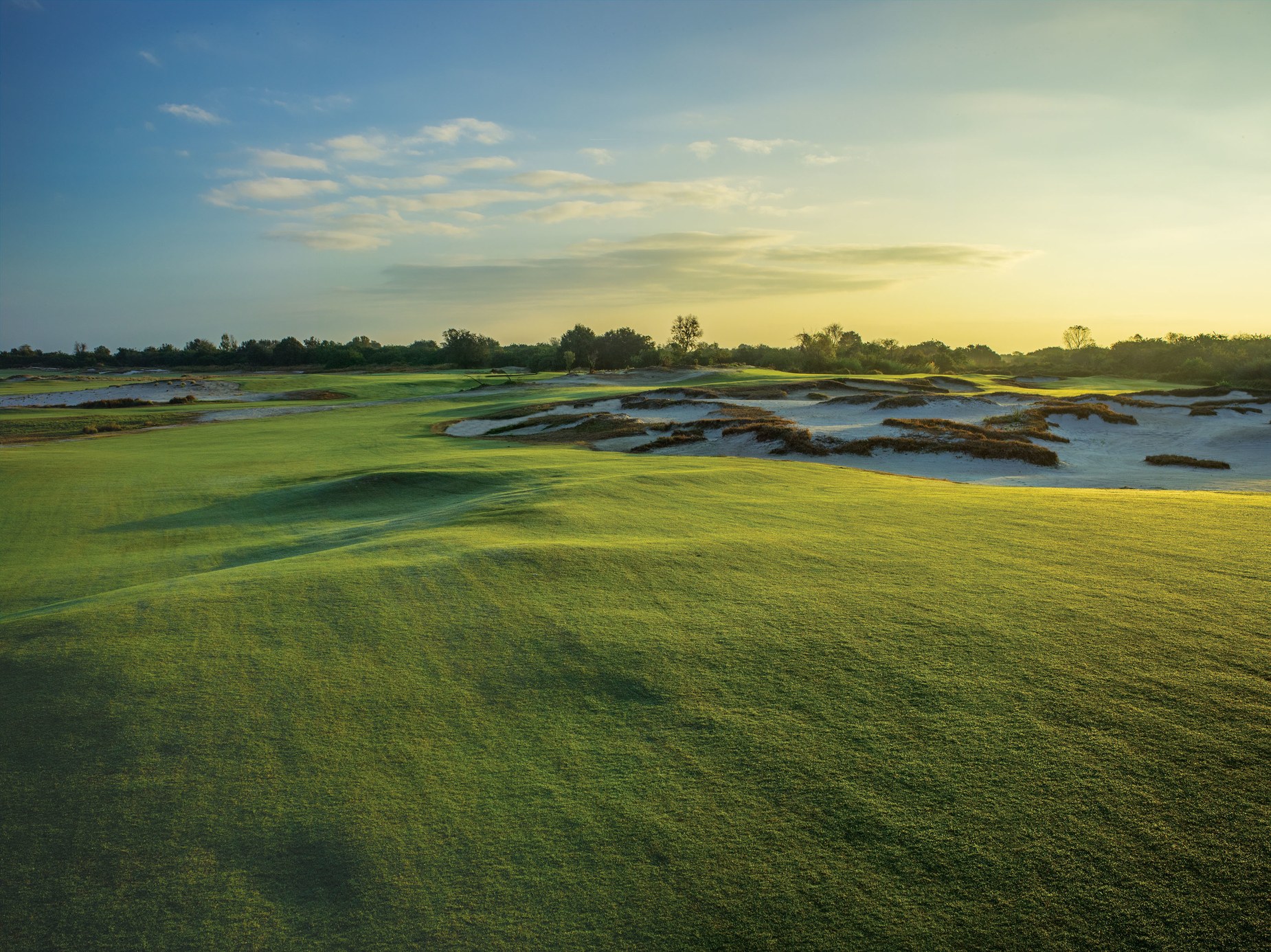 1. What it’s like for you, when a project is done like Streamsong Black for a while, and you’re just waiting for feedback?

“It’s funny, I was just talking to [executive vice president of Mosaic, the developers of Streamsong] Richard Mack this weekend, about this. It’s been over a year now that we stopped construction on it. What’s great is that the Black will be at a level of maturity where Rusty Mercer, the superintendent, should have it in awesome shape. It’s a testament to the resort’s desire to let it all grow in. But we were chatting about how highly anticipated it is, and this says nothing about Black, but it’s almost as if our team has put it in the rear-view mirror and moved onto the other projects because it was so long ago for us. And you kind of forget that it’s coming up so quickly now. We’re completely excited and looking very much to the feedback that you mentioned. And so now we’re in that strange limbo period where myself, Jim Wagner and the rest of the guys who worked on the course and put so much time and effort into it, but we now turned the course over to the superintendent, and we just wait.” 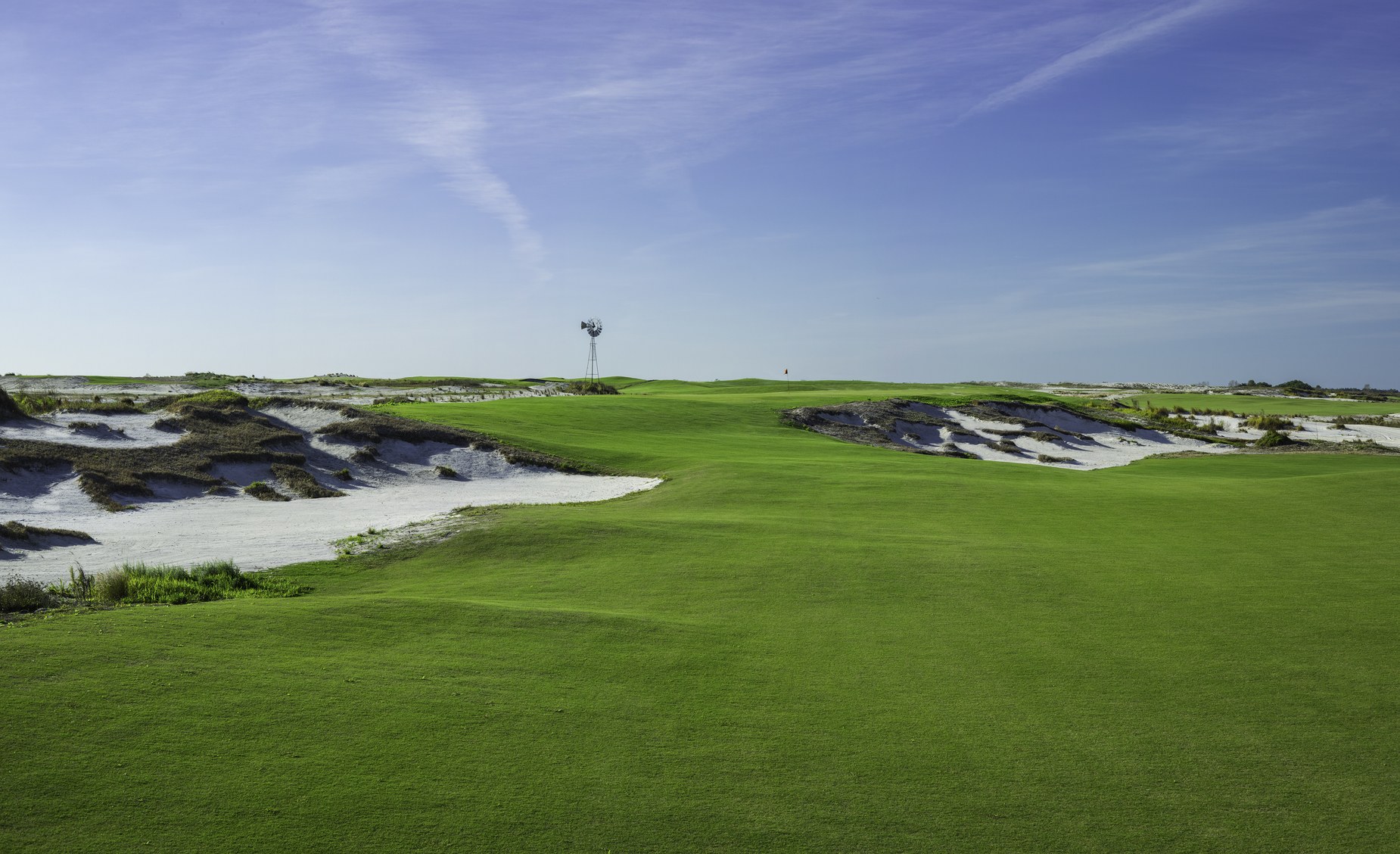 Laurence Lambrecht
Looking up at the second green at Streamsong Black

2. Looking back at the various design features at Black, what stands out to you most, and what are you most excited about showing to those playing?

“One of the nice things that Rich and the folks at Streamsong gave us was the freedom for Jim Wagner and our team and I to be creative. So we have a massive punchbowl on the ninth hole that might be one of the most fun golf holes we’ve ever built. I always love that sense of anticipation, walking up the hill to see where your ball ended up. And the 13th hole has two greens—there was a lot of discussion as to whether we could build a hole with two greens, ala Nos. 8 and 9 at Pine Valley. And we talked about it, but we only wanted to do it if we could make the tee shot meaningful, depending on which green you’re playing to, so having the strategy funnel all the way back to the tee rather than just the green. So we’re excited about the feedback we’ll get back at No. 13 whether one green or another is preferred or one angle over the other is better. So that’s something we’ve never done before. And I think the scale of the place, as big as the property is and as much flexibility as they allowed us to have there, that will yield to angles being particularly relevant on certain holes. There’s a lot of really interesting stuff out there. All the guys working on it, we were coming off Rio, and most of our team was down there, so there was just a lot of creative energy that inspired us by that site, and allowed us to create something special at the Black and have people come play it.” 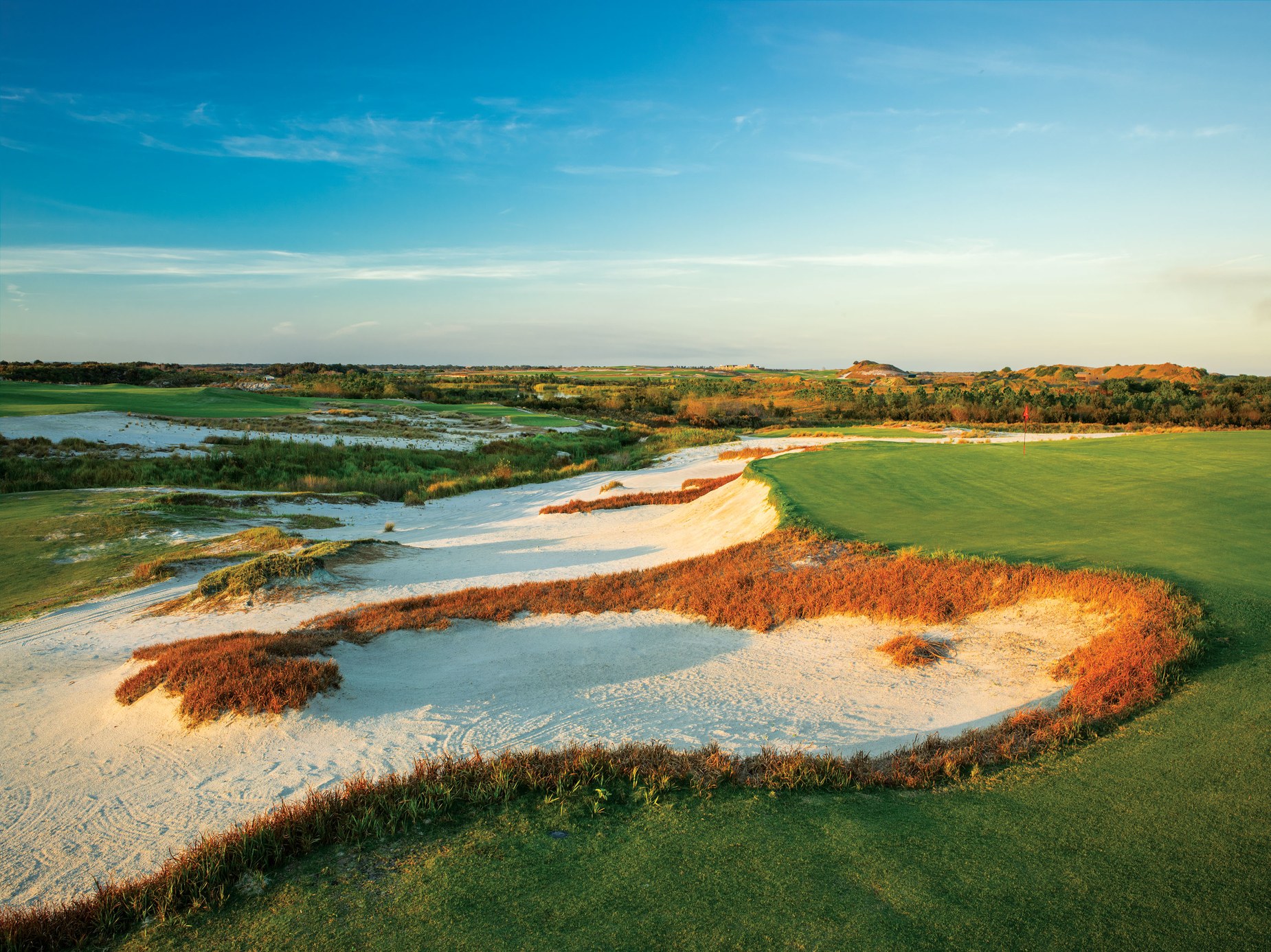 Laurence Lambrecht
Looking back from the green on the par-3 fifth hole.

4. Working with sand in Florida isn’t unique, but tying in everything with a Sand Belt look certainly is. How do you feel your team’s work at Black will stack up among others in the state?

“First, the Streamsong property in general, if you parachuted into the land, you’d never think you were in Florida. I think the work that Bill Coore and Ben Crenshaw did on Red, and Tom Doak did on Blue, certainly captured the natural advantages of the sand and the vegetation. So with those guys blazing the trail, we had a good head-start on how that unique character and look and feel for that specific part of Florida could be optimized. Our goal, because we share much stylistically and strategically and philosophically, with Bill and Ben and Tom. So we just needed to ask ourselves: ‘Our site is different because of X and Y. And it was principally the scale and the much more, sort of rolling piece of land rather than the dramatic pieces of land that they worked on with Red and Blue. So it was taking what they had created on that canvas and trying to modify it slightly to provide differentiation with the bunker looks in particular. Really, it’s most about variety, because you don’t want someone thinking that they’ve seen that hole somewhere on property or previously in their round at Black. So we were the beneficiaries of two great golf courses so we could go in and create something unique. There was an appreciation and a respect for what those guys did. It was figuring out a great routing, and add some unique design varieties, we were just hopeful that our interpretation and presentation of some holes stood out from the Red and Blue.”

A unique panoramic view from atop the Blue course, looking down at the new Black course, set to open in September

5. I’m amazed at all your work around the world at once. You’re talking to me right now from a bulldozer at The Creek Club, a Raynor and McDonald design your team is working on. How do you balance all your work at once?

“At the core, it’s about trusting the guys we have working with us, and putting them in a position where their creativity can shine. Our model, and I think it’s true for Bill and Ben, and Tom, is just finding really good, talented people and allow them to explore their creativity. Jim and I will act as editors and walk and talk with them, but the key has been to not only have great guys on site but empower them to make decisions and allow them to do good work as opposed to being stifled by sticking to plans or too much of heavy hand from an editing standpoint. The other thing is limiting the number of projects under construction to two or three. So while you’ll hear our names as consulting at clubs like Winged Foot, or consulting at Aronimink; we are, but right now, neither of those projects are under construction. So if we can limit the construction, then handling the plan work and the design work becomes an exercise in making sure our associates have time to crank out plans. That’s what it comes down to. Like I told you, I’ve been on a bulldozer at The Creek for the past three days here, and I love that part of the job. And if you ever lose that aspect, where Jim or I don’t have the time to get on the machinery, then we’ve lost the code [to success], as they say.” 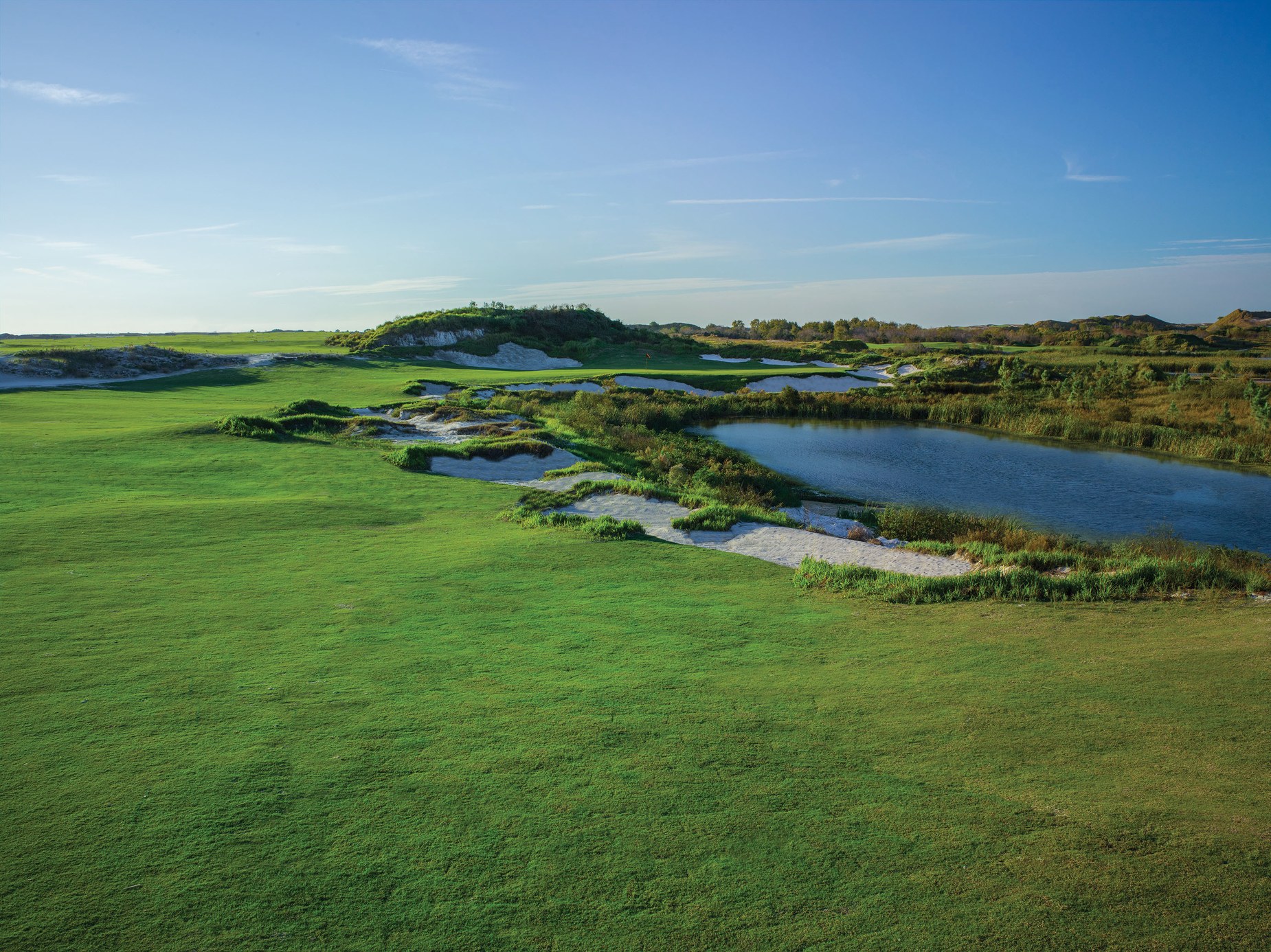 Here are some more photos: 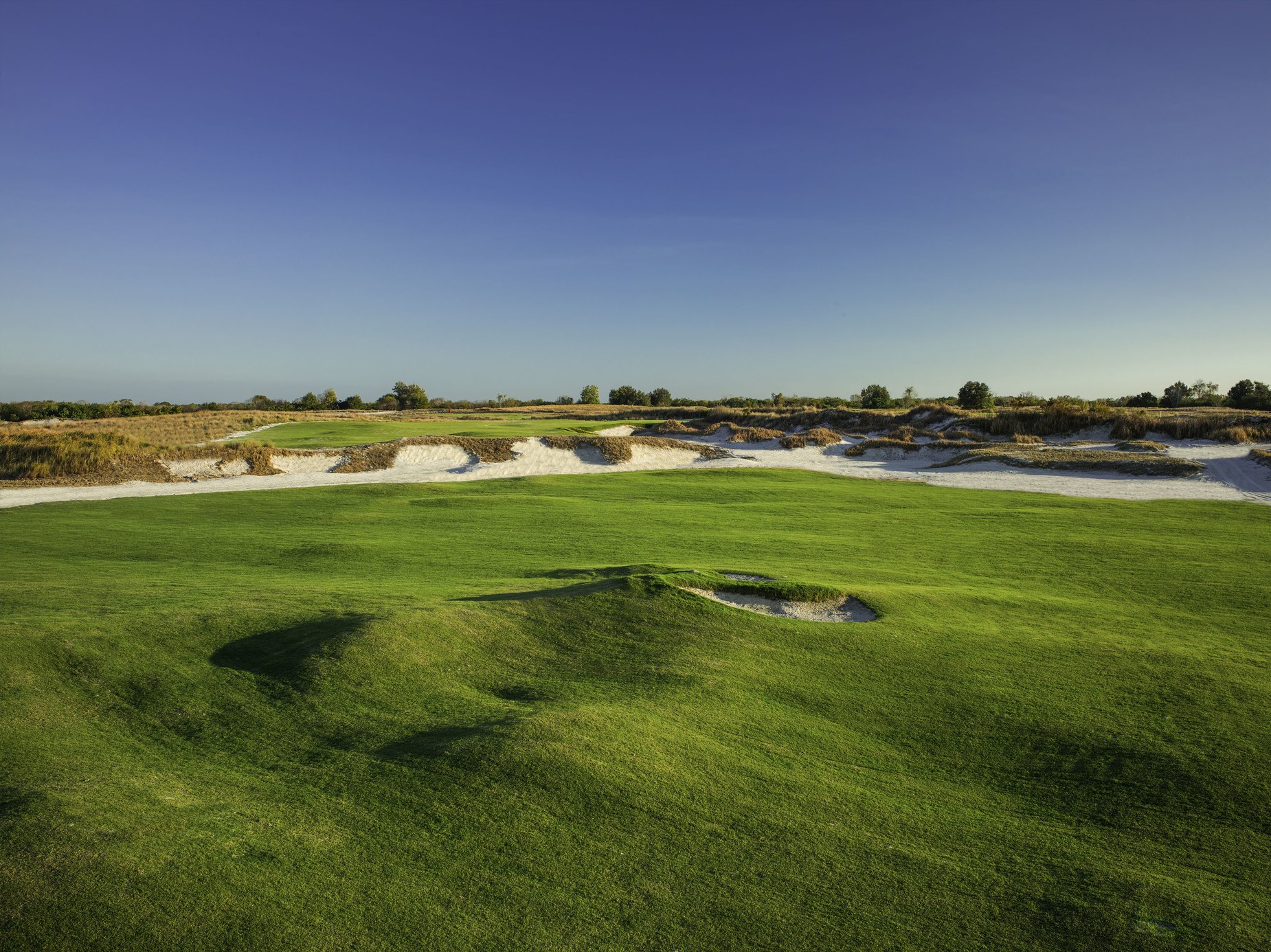 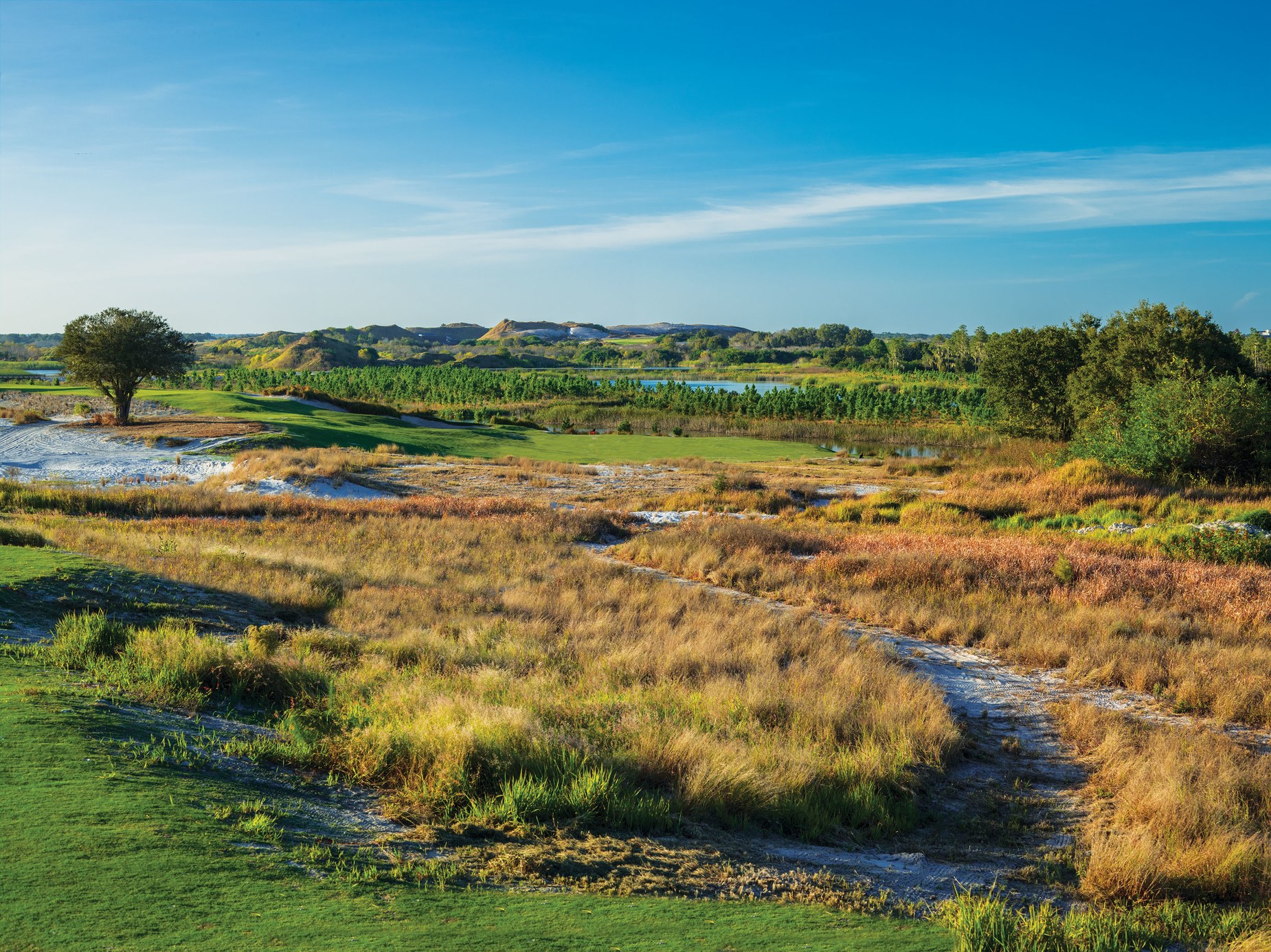 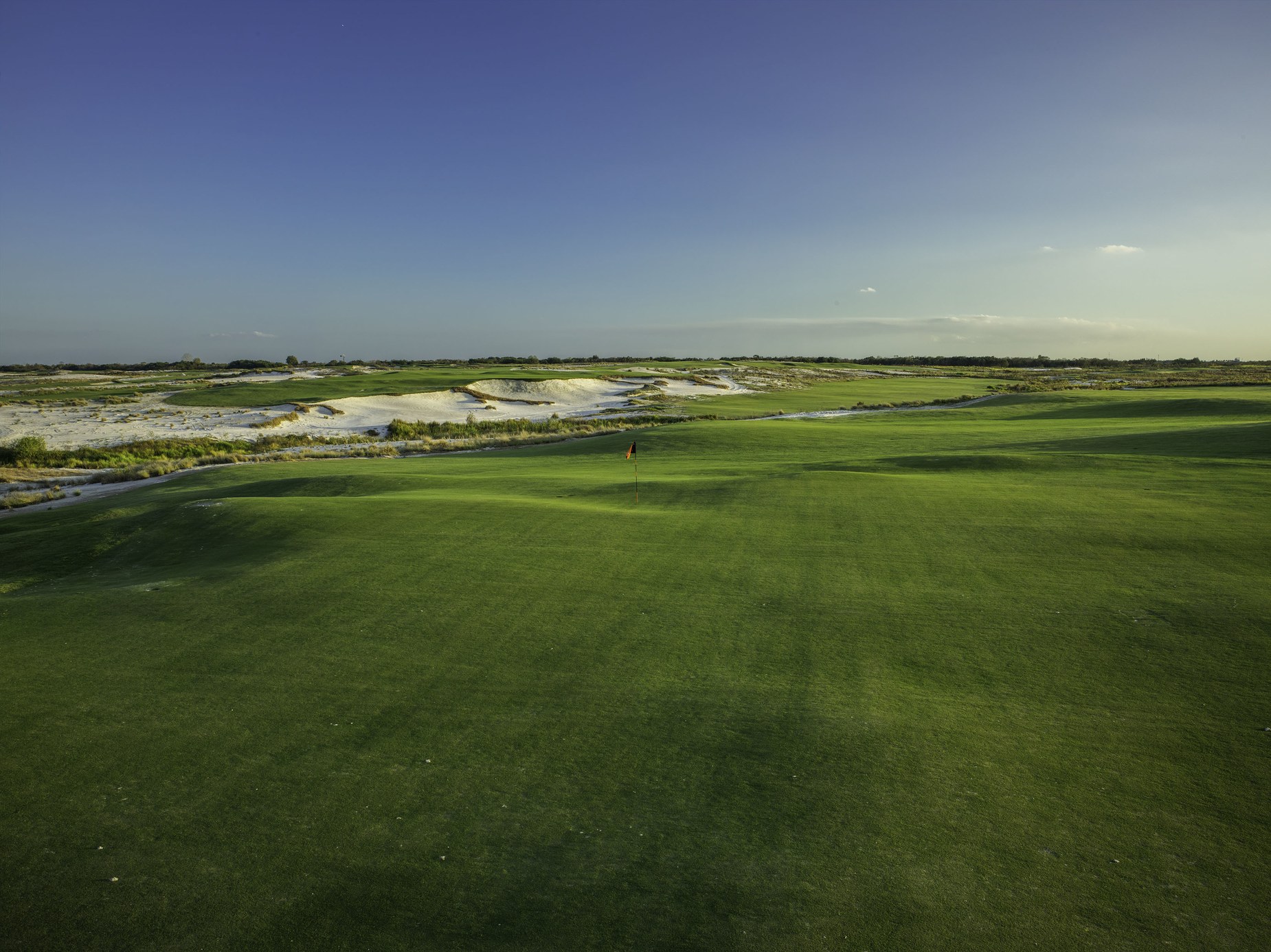 Laurence Lambrecht
The massive green at the par-5 fourth hole