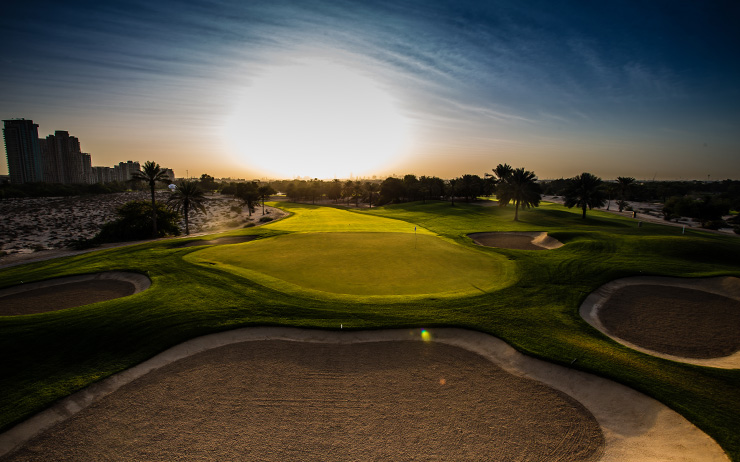 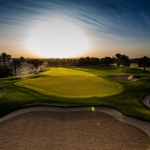 It’s been a busy month around the Middle East club scene.

Scroll through our photo gallery to see if you feature and don’t forget to share and tag friends, family and club mates in on your success. 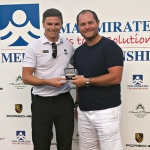 The score also saw Kraemer claim top position in the ‘B’ division from Guarav Verma and third placed Ashok Ahuja. Both Guarav and Ashok carded net 69s with Guarav gaining the edge courtesy of a superior back 9 score.

Dalip Tripathi won division A with a net 68, three clear of Cody Isles. A shot further back was Gary Black.

Robert Scott won the ‘C’ Division champion with a net 71 score. Russell Yeomans fired a 4-over-par 76 in challenging conditions to in the gross prize. The winner of the men’s stableford competition, run in conjunction with the medal tournament, was Sachin Mahajan with a score of 45 points.

The monthly junior medal was captured by Amber Waite with a net 76. 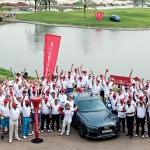 They will now contest a UAE final in Abu Dhabi for a chance to compete in the world final.

The Audi quattro Cup Golf Tournament Series was established in Germany in 1991 and celebrates its 26th anniversary in 2017. Last year, more than 100,000 players competed from 51 countries worldwide, in more than 800 tournaments. 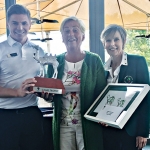 Thea Hendrickx scored 40 points on the Majlis course to win the Ladies Camel Trophy by a point from Swati Singh.

Singh won the Bronze Division (HCP 19-42) by a point from Shiba Khan.

In the Silver Division (HCP 0-18), Hyun Kyung Bae won with of 37 points, a point clear of Veronica Elias. 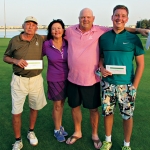 Bird, who now lies second to his father in the Player of the Year standings, carded an 83 to finish two shots clear of Dave Faulkner.

Hoggins’ 73 saw him finish one shot clear of Maggie Neil in the net division. 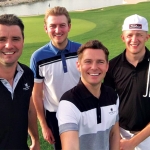 Brothers Badea and Ebrahim Esbai teamed with Fahad Al Hakam and Khalifa Daij to take top honours with a net score of 58.1. Iftikhar Butt, Naeem Khan, Rehman Tipu and Atta Yousafi were runnersup on 59.3 while the husband and wife pairings of David and Dena Wales and Rob and Debbie Lane were third on 59.9 net. 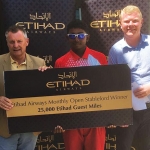 In division B, Bak Seng Tan won with 37 points from Teresa Sheepwash (35) and Alex Hambleton (34).

The next Etihad Open at Yas Links is scheduled for April 7 and is open to any player with an EGF or club handicap. 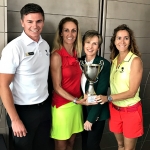 Monica Palao and Gema Blanco claimed the Ladies Nations Cup for Spain with a pairs betterball score of 44 points. They edged The Netherlands pairing of Ingrid Lind and Thea Hendrickx by a point.

Team Korean, represented by Hyun Kyung Bae and Young OK Kim, were third having also returned 43 points only to be pipped into second on a countback. 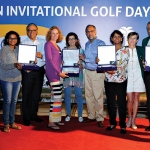 Andrew and Wendy Robinson, Glory Xavier and Hannah Cheryl Alan won the four-person shambles with 99 points in a 25th anniversary event which attracted 200 entries and was attended by the Indian Ambassador to the UAE, H.E. Mr. Navdeep Singh Suri. 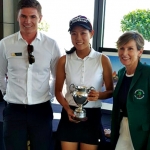 Chang carded rounds of 75 and 76 on the Faldo and Majlis courses respectively for a 151 aggregate. She led the field of 47 by six strokes before Gupta, having fired an opening 81, stormed home with a 72 on the Majlis to finish two back. Monica Palao was third on 162.

Defending club champion Viv Caley won the overall Silver Division with scores of net 71 and 72. Maureen Platt won the Bronze Division with 72-73 The best net for the weekday lady members was won by Antonia Ludvigson, who scored net 78 and 72 whilst Cathy Lajotte won overall best gross in this category, scoring 76 and 91. 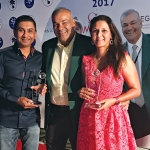 Suresh Shewakramani and Kurup Devanand edged Kuttan Malattiri and Elizabeth Agha on a countback for second lace after both pairs recorded 42 points.

Sethi’s Captain’s Day hosted 128 players on the Majlis course, complete with the “Captain’s Corner”- a site of music, live cooking, refreshments and the ‘Boat Challenge’ which was eventually won by Shravan Khanna and Varun Sood.

The day started in traditional fashion, with Sethi hitting the captain’s ceremonial opening drive on the first hole. Competitors were invited to guess the length of the Sethi’s drive; Yana Jamieson and David Waite both correctly guessed 217 yards, no mean feat in the strong winds of the day. 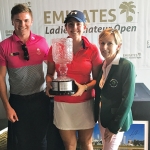 Home club star Alison Muirhead bettered by one her winning score from a year ago to successfully defend her Emirates Ladies Amateur Open title with a one-under-par 71.

Arabian Ranches Cheng Kim Chiang was runner-up in the PING-sponsored event with a 74 while Abu Dhabi Golf Club’s Chantal El-Chaib was third on 76. 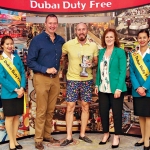 Kane scored 43 stableford points and got up courtesy of a superior back nine countback from David Richardson in an event well supported by the DIGS.

Richardson’s consolation was victory in the men’s division from Paul Byrne (37 points) and Matt Neno (36 points). Harry Sheedy won the gross prize with a 77.

Evelyn O’Brien’s 32 points won here the ladies title from Nicola Chittenden who scored 31 points and edged Sile McIlroy on a back nine countback to finish runner-up.

Colm McLoughlin, Executive Vice Chairman and CEO of Dubai Duty Free said: “This year marked the 13th year of the annual golf event which honours Mark Fahy, a good friend of Dubai Duty Free and of the Irish community. We are delighted to have a good turnout this year and to see new members playing every year.

“Thanks to the DIGS captain Conor Lawler, my team at Dubai Duty Free and to the Jumeirah Golf Estates for making this year’s event so enjoyable. I am glad the competition was so closely contested and that a great day was had by all.” 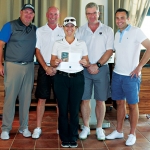 Michael Herb was the only player to beat the course, finishing 1 up in the 18 holes medal, individual bogey format from black tees.

David Cracknell (-1) and Liam Thornton (-2) completed to men’s podium while Dori Gantt won the ladies title with a -4 total. 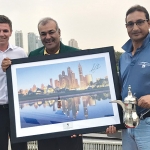 Rajinder Razdan’s 38 stablefords saw him capture the annual Chairman’s Cup by a point from David Moody and Joe Smith.

The reward for all three were photographs signed by reigning Open Champion and 2007 Desert Classic winner Henrik Stenson.

Yasser Refai won the A Division with a score of 37 points on the Majlis course, narrowly beating Imran Qayyum on countback. Tej Chhabra won the B division with 36 points on a countback from Kish Bandopadhyay. 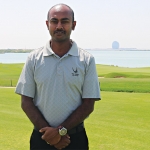 Hidhayath received consistently high scores during the past months’ mystery shopper style audits to win the title at what are regarded as the Oscars of the golf industry.

Recognising the top golf venues across the world, Yas Links was nominated in a number of categories, including Golf Manager of the Year and Greenkeeper of the Year.

Yas Links received a Gold Flag Award, the highest 59Club industry benchmark awarded to clubs who not only achieve the highest standard of service as determined by the benchmarking criteria, but also provide outstanding facilities for golfers to enjoy. 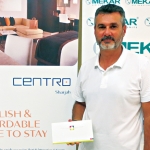 Namir Al Naimi showed bounce back ability to win the Centro Sharjah Midweek Medal with a two-under net score of 34.

Al Naimi responded to two bogeys with bounce back birdies each time to win by four shots from Mohammad Shafiq.

The gross prize came down to a scorecard countback with David Murphy pipping Faizeen Bhyat. 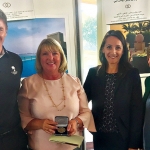 Bronze division champion Caroline Grainger won the overall March medal with a net 67 on the Majlis course on a day that produced 15 sub par scores.

Amarjeet Radia’s superior back nine score saw her win the Silver ‘A’ division on a countback from Ingrid Lind who pipped Lady Captain Maura Duggan to the runner-up slot after all three players carded net 68s.

The Silver ‘B’ division was won by Martha Wong, again with a net 68, who pipped Sue Hopwood on countback despite a 10 on the 10th hole. Wong carried on from her recent net win in the recent Emirates Ladies Amateur Open.

Monica Palao was the gross champion with a 77 strokes. 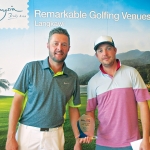 Nathan Fisher rode a fast start and a hot putter to victory in the Orient Travel, Malaysia Truly Asia Monthly Medal with a three under net 69.

Fisher reeled off four birdies in an outward nine of 34 and then one more in a bogey free outward 35 as a new Taylormade putter did the trick on the greens.

Afternoon players Adam Smith and MY Cho came closest to Fisher with net 70s with Smith winning the afternoon prize on countback.

In the mornings play, Max Hibbert finished runnrup to Fisher with a net 71 while Hassan Yazdi was third a shot further back.

In the net division Cho, Hassan Yazdi and Hibbert will undoubtedly push Namir all the way for the title. The Order of Merit runs to May 5 with the three leading net players and gross winner set to represent Sharjah Golf & Shooting Club in the World Amateur Inter Team Golf Championship. 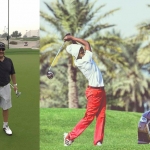 Jim Lanceley remains atop the order of merit standings for a second successive month with 99 points, seven clear of Rob Lane.

The winners of the six round series will have an opportunity to go forward to December’s World finals at the prestigious Quivira Golf Club in Cabo San Luca in Mexico. 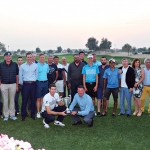 A re-match is scheduled in Moscow in July. 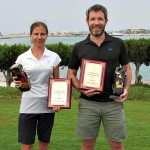 Long recovered from a water ball on the 18th hole par the par 5 and open up a five shot lead over Callum Bird and John Wilby (82). He then dropped three shots in his opening nine compared to 5 from Wilby and 13 from Bird who had an absolute nightmare start.

It put Long in a commanding control and ensured a much more relaxed homeward nine.. Bird had to settle for third place in the gross division after Jae Woong Lee’s bettered his opening round by 10 shots on day two to finish runner-up to Long. Wilby ended up winning the net title with a 36-hole total of 142.

Wilma Fernandes also carded a 101 in the opening round and although she struggled on day two, it was still enough to win the ladies net title. 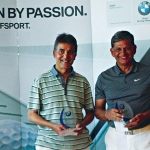 Club captain Vivian Verma and Sanjoy Das carded a net 62 to win the BMW Members and Guest Social which was decided with a front nine betterball and homeward nine shambles format.

Out in the morning groups, Verma and Das collaborated for eight net birdies and an eagle and came home without a single net bogey. Roy Holmes & Roger Ledeboer won the afternoon title with a net 64.

In the morning the duo of Ben Mulvaney and Nick Hymas joined forces to produce a medal score of 32 for the betterball format before their score was bettered by one as Arun Tuli and Diman Rai carded a 31.

The shambles back nine format had a bizarre symmetry as the morning pairing of Jaydeep Sarkar and Pieter Mottie scored 32 and the afternoons winners Moiz Khan & Adhip Shankar signed for a 31. 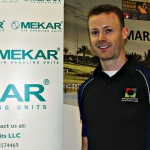 Inform David Murphy won the second addition of the Centro Medal in March with a net 34, overcoming several bogeys with two net eagles over the nine holes. Murphy pipped leading lady MY Cho by a single stroke. 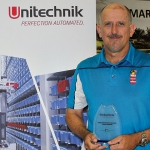 Roy Holmes beat Adam Smith on a scorecard countback after both carded 34 points.

Holmes triumphed with a superior back nine of 16 stableford points, pipping Smith by two in conditions – heavy rain, gusting winds and poor visibility – that tested the field’s resilience and determination.

Smith’s consolation was victory in division one with Raymi Van Der Spek taking home the division two spoils with 32 points.

The Gross division was won by 2016/17 League Team captain Mike Robson on 33 points, an impressive display given the dreadful weather.