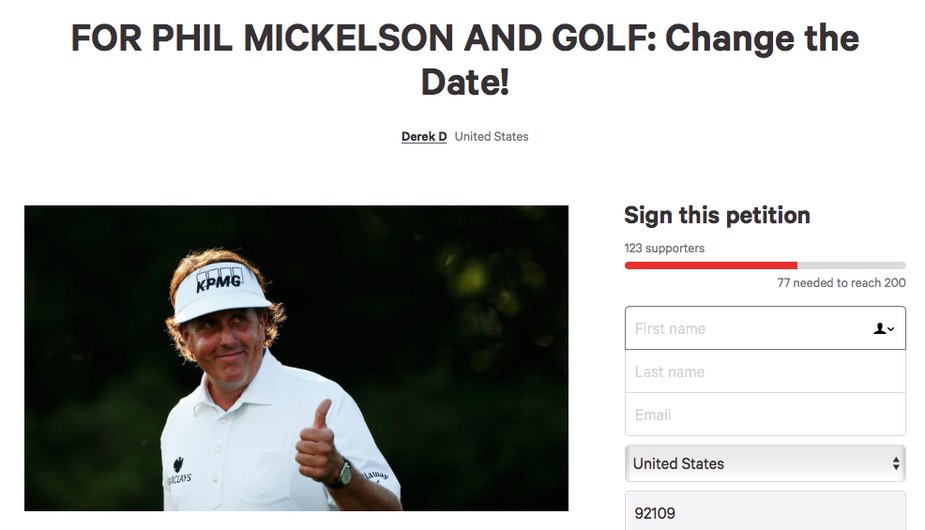 A petition has been launched at Change.org that urges Pacific Ridge School to change the date of its high school graduation to allow Phil Mickelson to compete in the U.S. Open.

Mickelson has said he would skip the Open to attend daughter Amanda’s graduation from Pacific Ridge. Amanda, the senior class president, is speaking at the ceremony.

The petition was started by a PGA of America professional, Derek Deminsky, the director of instruction at Forty Niner Country Club in Tucson, Ariz. Here is the petition, beneath the headline, “FOR PHIL MICKELSON AND GOLF: Change the Date!”:

“On behalf of golf fans everywhere, I am requesting to see if there is ANY WAY possible to reschedule your graduation ceremony to Wed June 14th (or before) to allow Phil Mickelson to play in this year’s U.S. Open and continue his quest for the career Grand Slam. For Phil not to play to see Amanda speak is absolutely beautiful and shows the kind of caring father and family man he is, but if there is ANY WAY POSSIBLE to move it to the day before, I and MILLIONS of golf fans everywhere would GREATLY appreciate it!

As of this writing, only 122 have signed the petition.

RELATED: Priority No.1 for Phil Mickelson

Meanwhile, a couple of people have make a similar request of the school via its Facebook page. One noted, “It would be terrific to see the school come together for the father of your class President and try and make a difference for a guy who has done so much by giving his time, his money and his heart to many great causes. Thank you.”

It doesn’t seem likely that it would work, but, as they say in school, give them an A for effort.