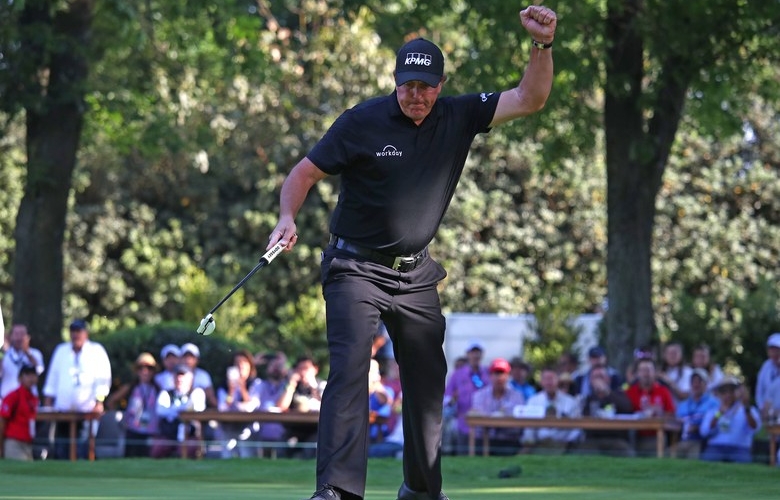 Gregory Shamus
Phil Mickelson reacts after making a birdie on the 16th hole during the final round of 2020 WGC-Mexico Championship.

By Brian Wacker
Phil Mickelson can still qualify for next week’s WGC-Mexico Championship if he moves into the top 50 in the Official World Golf Ranking after this week’s Genesis Invitational. It’s something that he could have taken care of on Sunday had he not stumbled at the finish in the AT&T Pebble Beach Pro-Am, where he bogeyed five of his final 11 holes to finish in third place, five strokes back of winner Nick Taylor.

It turns out, however, it won’t matter anyway. On Monday night, Mickelson, currently No. 55 in the OWGR, said on Twitter that he won’t be in Mexico regardless of whether he qualifies for the event.

“I won’t be playing even if I make it,” Mickelson tweeted in response to someone asking how the 49-year-old needed to fare this week at Riviera Country Club. “My kids have the week off so we are going on a trip after I shoot a commercial I have scheduled.”

I won’t be playing even if I make it. My kids have the week off so we are going on a trip after I shoot a commercial I have scheduled.

Though Mickelson has played in Mexico every year since the event moved there from Trump Doral four years ago, including winning there in 2017, it’s hardly the first time that he will have skipped a WGC. Should he not crack the top 50 in the OWGR by the end of this week, however, it would mark the first time that Mickelson has been ineligible for one. Mickelson’s 25-plus-year streak of being ranked in the top 50 in the world, which was snapped following his T-28 at the WGC-HSBC Champions last November, predates the creation of the World Golf Championships by six years.

RELATED: Phil Mickelson accomplished something only two other players have done in tour history

It should be noted that this week’s Genesis Invitational will also be Mickelson’s fifth straight week of competition, a span that included a trip to the Middle East for the European Tour’s Saudi International.

Much of the conversation about Mickelson at Pebble Beach centred around whether he could improve his placement in the OWGR to be able to qualify not only for the WGC-Mexico but also a spot in the U.S. Open at Winged Foot. Mickelson did manage to move back into the top 60 on Sunday, which is where he needs to be ranked on either May 18 or June 15 to earn a full exemption into the championship. If he isn’t in the top 60 on either of those dates, he said last week that he would turn down a special exemption from the USGA into the major, where he has finished runner-up six times.