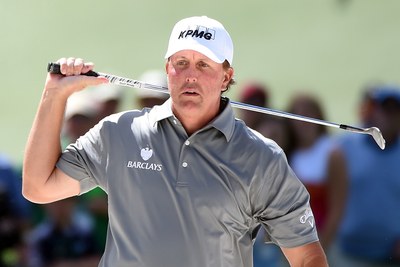 One of golf’s most skilled short-game artists will be putting his skills to use against some of the LPGA Tour’s best next week. Phil Mickelson will participate in a Skills Challenge at next week’s KPMG Women’s PGA Championship at Olympia Fields in Illinois, which will pit him against Lydia Ko, Stacy Lewis and Brooke Henderson, the defending champion of this women’s major.

The group will compete in three timed skills challenges — chipping to an arrangement of target, then hitting a flop shot over an eight-foot wall before having to trying to break panes of glass (with their faces on each of them) — in a kind of Big Break meets American Ninja Warrior challenge. ESPN’s Mike Greenberg will host the event and conduct a Q&A afterward with a collection of youth golfers in attendance.

RELATED: Phil Mickelson and Bones split up after a 25-year partnership

The Skills Challenge will take place on the South course at Olympia Fields, site of the 2003 U.S. Open and where next week’s KPMG Women’s PGA will be. Mickelson doesn’t have the best history at the course, finishing T-55 at that ‘03 U.S. Open. ANd he’ll have his hands full trying to beat the LPGA Tour’s best next week in this Skills Challenge — despite his short-game savvyness.