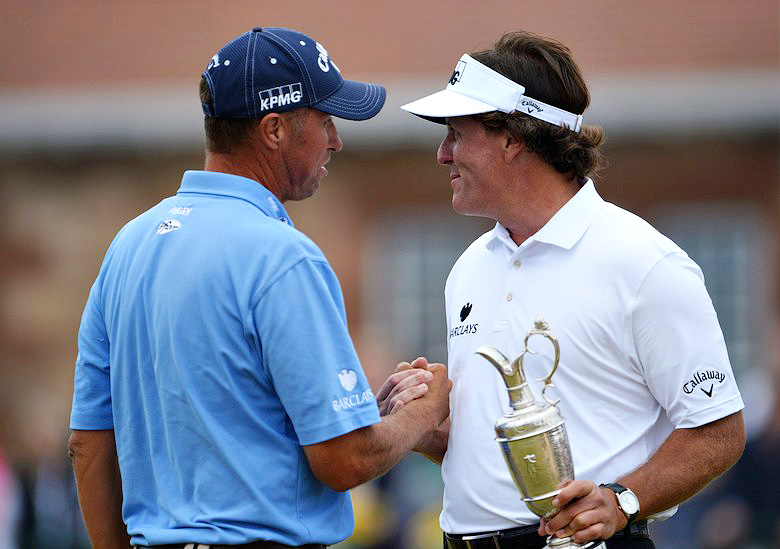 GULLANE, SCOTLAND – JULY 21: Phil Mickelson of the United States holds the Claret Jug with caddie Jim Mackay after the final round of the 142nd Open Championship at Muirfield on July 21, 2013 in Gullane, Scotland. (Photo by Stuart Franklin/Getty Images)

If Phil Mickelson completes the career Grand Slam, it’s going to happen with another caddie. On Tuesday afternoon, Mickelson and longtime bag man Jim “Bones” Mackay announced they are parting ways through a joint statement sent to various members of the media. At least to golf fans, the phrase “nothing lasts forever” has never seemed rung more true.

Mackay has been Mickelson’s caddie since he turned pro in 1992, and the two have shared 25 memorable years together. Most notably, the pair won 41 PGA Tour titles, including five major championships, and competed in a record 11 Ryder Cups together. And the on-course conversations through the years between golf’s current longest-running player-caddie relationship have become the stuff of legend.

Phil’s brother, Tim, who is also Jon Rahm’s agent, will replace Bones on the bag for now. Earlier in the season, Tim stepped in for Bones at the WGC-Mexico Championship after Bones got sick. Prior to that, Bones hadn’t missed a round on Mickelson’s bag since the 1999 American Express Championship. There were rumors circulating that Bones might go to Rahm’s bag, but the young star quickly shot that down on Tuesday afternoon.

Regarding the news today: @caddieadam is my caddie and will absolutely still be my caddie! pic.twitter.com/IOjxXbvtP3

When Mickelson won the 2013 Open Championship, it was Bones who broke down in tears. That was also the last win for Mickelson, who recently turned 47.

Mickelson withdrew from last week’s U.S. Open to attend his daughter’s high school graduation. However, he held out hope until Thursday that he could make his first-round tee time if there was a weather delay, and he even sent Bones to Erin Hills to do a scouting report.

There’s speculation whether Mackay, who had double knee replacement surgery in November, will caddie for another PGA Tour pro or take a job in television. Mackay drew positive reviews when he worked as a reporter for Golf Channel during the 2015 RSM Classic.

After 25 very rewarding and memorable years, Bones and I have mutually decided to end our player-caddie relationship. Our decision is not based on a single incident. We just feel it’s the right time for a change.
Bones is one of the most knowledgable and dedicated caddies in the world. He is always prepared and has the ability to make decisions in pressure packed situations. Bones is without a doubt one of the most thoughtful people that I have ever known. The next player to work with him will obviously be very lucky.
My relationship and history with Bones far exceeds golf. He has been one of the most important and special people in my life since the day we met and I will always be grateful for everything he has done for me. Amy and I, and our children, will always think of Bones, Jen, Oliver, and Emma as family.
We are looking forward to sharing life and friendship with them forever. My brother Tim will be on my bag for the rest of the year. Bones has not used his veto this year andI heard a rumor that he is trying to pass his veto to Tim. For the record, vetoes are non-transferable.

And here is Bones’ statement:

After an amazing 25-year run, Phil and I have mutually decided to go our separate ways. Player-caddie relationships don’t often last that long. I will always be grateful that I was around to witness so much of Phil’s career. When Phil hired me in 1992, I had one dream: to caddie in a Ryder Cup. Last year, at Hazeltine, Phil played in his 11th straight Ryder Cup. It was so cool to have a front row seat.
I wish Phil nothing but the best. His game is still at an elite level, and when he wins in the future (definitely the Masters), I will be among the first to congratulate him.
I do want to say for the record that I did not use my “veto” this year. I would like to pass it along to Tim, in all its glory.

No, thank you, guys. Joking about the annual “veto” ‘til the very end? This dynamic duo will be sorely missed.