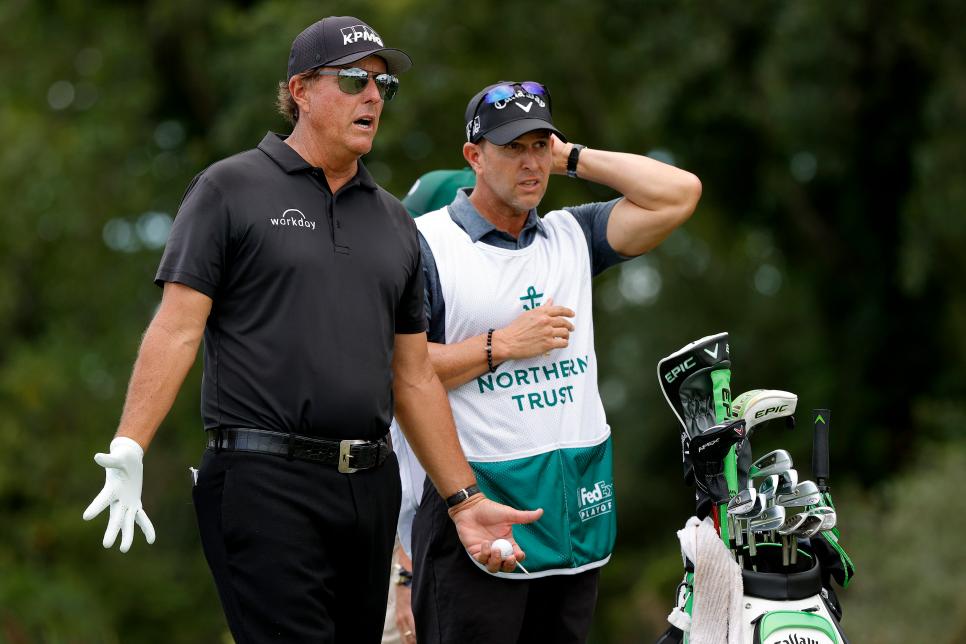 Sarah Stier
Phil Mickelson talks with caddie Tim Mickelson on the 16th tee during the first round of the Northern Trust.

By Daniel Rapaport
JERSEY CITY, N.J. — It’s not quite Sunday at the Wyndham or Sunday at the BMW, but Friday at the Northern Trust brings some nervousness indeed. For players who entered the FedEx Cup Playoffs anywhere near the magic number of 70—that’s the benchmark guaranteed to make it to next week’s BMW Championship—making the weekend at Liberty National is an absolute must.

A number of guys near that bubble are doing exactly what they need to—like Harold Varner III, who entered No. 72, but being T-6 at the halfway point has him projected to move all the way up to No. 44. Erik van Rooyen, who won two weeks ago at the Barracuda Championship, opened with 69-67, good enough to bump him from No. 76 to a projected No. 65. Not out of the woods yet, but he essentially controls his own destiny as far as keeping his season alive.

On the other hand, some big names—and some with a massive tournament in their future—will be refreshing their PGA Tour apps rather fervently throughout the weekend. Here are some guys who missed the weekend at Liberty National, and might come next.

Phil Mickelson
Lefty’s post-Kiawah struggles continued in New Jersey, where he’ll miss the cut by four shots after an uninspired 73-72 performance. He now has just one finish inside the top 60 since that remarkable week at the PGA Championship, and his once-promising chances to make a 13th consecutive Ryder Cup appear to be in shambles. In more positive news, he’s projected to barely make the BMW at No. 68. Barring anything crazy, he’ll be there at Caves Valley, hoping to recapture the form that saw him win a major championship out of virtually nowhere.

Tyrrell Hatton
It wasn’t so long ago that Hatton was the No. 5 player in the world, hot off a big victory at the Abu Dhabi HSBC Championship event to begin the year. He’s dropped to No. 13 since then despite a T-2 at the Palmetto Championship—that came against a very weak field by PGA Tour standards—and will almost certainly see his season end after missing the cut by three at Liberty National. Hatton sits at No. 73 in the projections, one spot behind fellow Brit Matt Fitzpatrick, who also missed the cut, meaning Fitz would have to finish no worse than No. 69 in order for Hatton to stay alive. Per Data Golf, the odds are under 20 percent.

Hatton has, however, essentially locked up a spot on this year’s Ryder Cup team. He’ll likely take the next two weeks off before playing in the BMW PGA Championship on the European Tour, which falls one week after the Tour Championship and two weeks before the Ryder Cup begins at Whistling Straits.

Matt Fitzpatrick
Fitzpatrick missed the cut at the Northern Trust for the second straight year, but unlike 12 months ago at TPC Boston, his pre-playoff ranking wasn’t high enough to guarantee him a spot at the BMW. The Englishman made the turn in four over for the event, needing a back-nine 31 in order to get to the weekend and give himself a chance to make up some ground. He fought valiantly but could only manage a 33, and now must wait in limbo for the next couple days. He’s currently projected to finish No. 72 and miss the BMW, but Data Golf actually gives him a 52-percent chance to sneak in by the (non-existent) hair on his chinny chin chin.

Fitzpatrick has also essentially clinched a Ryder Cup spot, and he too will play the BMW PGA Championship at Wentworth. The question is whether he’ll had any of the next two European Tour events—the Omega European Masters in Switzerland, where he has won twice, and the Italian Open, where he finished runner-up in 2019—to his schedule. 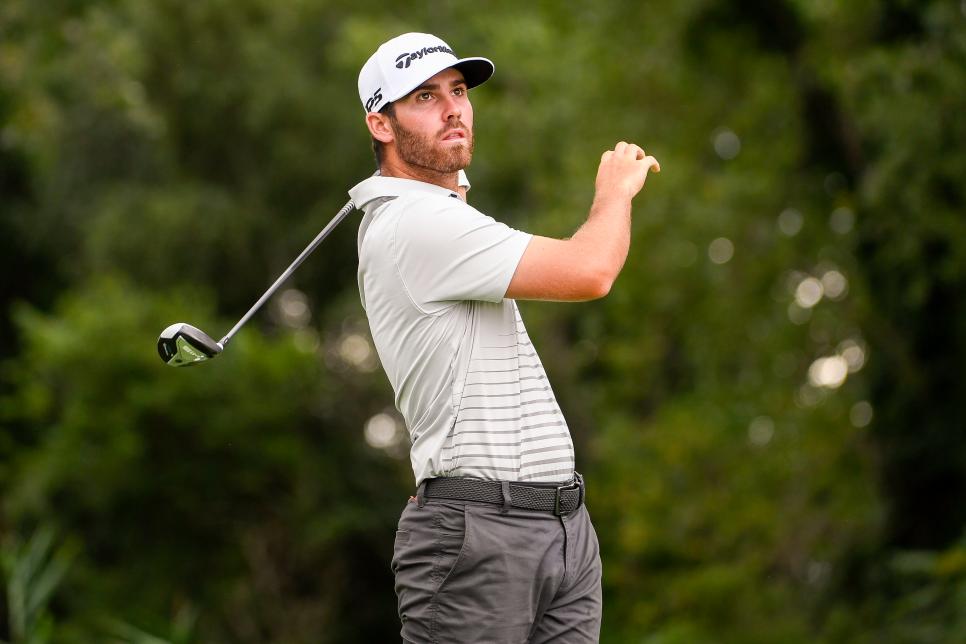 Tracy Wilcox
Matthew Wolff hits his tee shot at the 16th hole during the first round of the Northern Trust.

Matthew Wolff
Wolff played alongside Fitzpatrick and looked positively distraught throughout the back-nine, frequently banging his driver against the turf while walking up the fairway and seemingly trying to finish as quickly as possible. It’s been an emotionally draining season for the 22-year-old, who began the wraparound campaign with back-to-back runner-up finishes at the U.S. Open and Shriners Hospitals for Children Open, but has struggled since, both with his game and his mental state—he took two months away from the game between the Masters and U.S. Open to prioritize his happiness. He’s played six times since with unspectacular results, and he’s projected to be the last guy into the BMW at No. 70. Whether he makes the trip down to Baltimore or not is a different story.

Adam Scott
There’s no leader board-watching required here; Scott’s season is over after following an opening 67 with a four-over 75 to miss the cut by a single shot. It’s also been a strange year for the Aussie, who has not been able to return home due to COVID restrictions. The golf hasn’t been awful by any stretch, as he’s made the cut in all but one of his 18 starts, but he had just two top-10 finishes. One of those came at last week’s Wyndham, where he missed a four-footer to win the tournament on the first playoff hole. Had he made that … different story, of course, But he didn’t, and now he has some freedom in his schedule should he desire a return home to Australia.

Bubba Watson
It’s not quite fair to pinpoint one nine-hole stretch when judging a whole season, but it’s hard not to think of the back-nine at the Travelers Championship a few months back when reviewing Watson’s campaign. The two-time Masters champion played his last five holes in six over par to tumble from contention to a T-19, and after missing the cut at Liberty, he will not advance to the BMW for the second time in three years.