Thanks but no Thanks 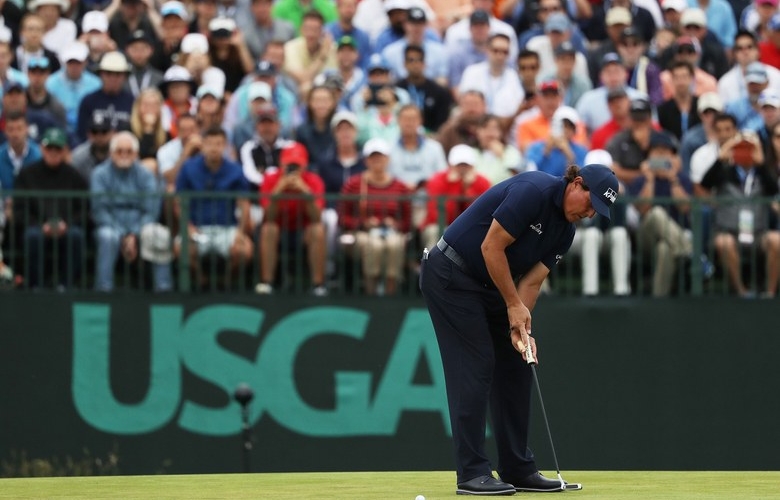 Streeter Lecka/Getty Images
Phil Mickelson putts on the seventh green during the second round of the 2018 U.S. Open at Shinnecock Hills.

By Dave Shedloski
PEBBLE BEACH — At No. 72 in the World Ranking, Phil Mickelson currently has not qualified to play in this year’s U.S. Open at Winged Foot Golf Club, site of one of his record six second-place finishes in the championship. If that were the case heading into the Championship in June, the USGA could offer him a special exemption.

But it would be a waste of time.

Mickelson won’t accept one. Of course, he would first have to request one, and it doesn’t sound like he is inclined to do so.

“I am either going to get in the field on my own or I’ll have to try to qualify. I’m not going to take a special exemption,” Mickelson said Wednesday at Pebble Beach Golf Links, where he is defending his title in the AT&T Pebble Beach Pro-Am.

Pressed on why he wouldn’t accept the exemption, which the USGA has granted throughout the years to the likes of Ben Hogan, Sam Snead, Arnold Palmer, Jack Nicklaus and Tom Watson, “I just won’t,” Mickelson responded.

“They have never been an organization that likes to give out exemptions, special exemptions,” said Mickelson, who turns 50 on June 16, Tuesday of U.S. Open week. “I don’t want a special exemption. I think I’ll get in the tournament. If I get in, I deserve to be there. If I don’t, I don’t. I don’t want a sympathy spot. If I am good enough to make it and qualify, then I need to earn my spot there.”

Mickelson, who has played in the championship 28 times but skipped the 2017 edition to attend the high school graduation of his daughter, Amanda, has several avenues to qualify for the 120th U.S. Open. If he is ranked among the top 60 in the world after the PGA Championship on May 17 or on the Monday of U.S. Open week, June 15, he would earn a spot in the 156-player field. He also would get in if he won the Masters, PGA Championship at TPC Harding Park in San Francisco or the Players Championship.

Coming off a T-3 in the Saudi International on the European Tour, Mickelson also could attempt to qualify via sectional qualifying. He last played in a sectional in 1993 in Columbus, Ohio, losing out in a 10-for-seven playoff at Brookside Golf & Country Club. In fact, Mickelson ended up having to come back the following day when he lost out on the final spot to Eric Hoos, who after several years trying to break through on tour became a college golf coach.

The USGA has granted 55 special exemptions starting with Hogan, a four-time winner, in 1966. Nicklaus, also a winner of four U.S. Open titles, received a record eight exemptions in his career as he played in 45 straight U.S. Opens. Two-time U.S. Open winner Ernie Els is the last player to receive a special exemption, at last year’s championship at Pebble Beach.