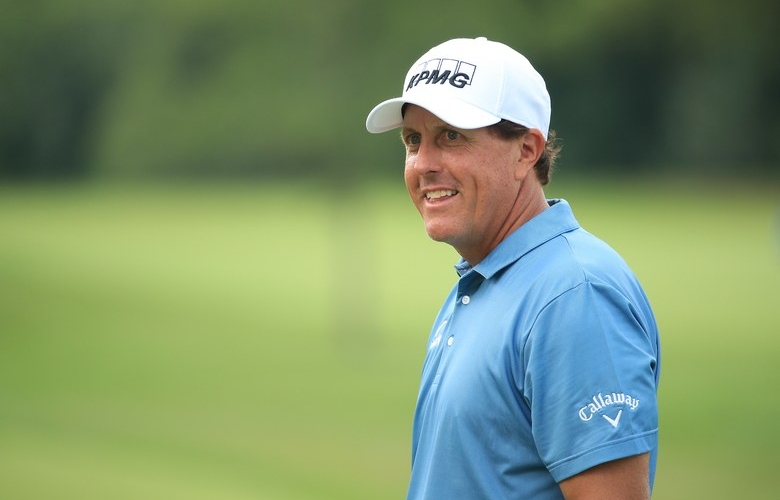 Mickelson in action during practice for the BMW Championship at Medinah Country Club on August 13, 2019, in Medinah, Illinois. (Photo by Andrew Redington/Getty Images)

By Christopher Powers
There are a lot of reasons that slow play is such a huge problem on the PGA Tour, but one that’s taken much of the blame of late is the use of green-reading books, also known as greens books or green-reading materials. These “maps,” which resemble something you’d find on your Weather Channel app, have changed the way many of the best players in the world read greens.

The common complaint with these books is that not only do they take some of the skill out of putting, they slow up play. The image of a player going to a book on even the most routine of putts is off-putting for the casual golf fan, and even some of golf’s most-respected voices have called for a ban. Joe Skovron, longtime caddie for Rickie Fowler, disagrees, as does Phil Mickelson, who went as far to say that the books help speed up play.

Skovron, who started the discussion, also defended the use of the books. “I don’t care if green books are legal or not, but I don’t buy blaming them for slow play,” Skovron’s tweet read. “If you use them correctly and at the right time it can actually speed up your reads.”

Mickelson responded on Tuesday morning, and he was quite firm in his opinion.

“The greens book allows me to do 80 percent of my read before I even get to the green,” Mickelson wrote. “For anyone to say they slow up play is flat out idiotic.”

The five-time major champion wasn’t done there, adding that the books even allow him to play fewer practice rounds throughout the year.

“Let me add the countless hours and many days it saves me preparing for tournaments throughout the year. The book gives me info on where I can/can’t miss it and still get up and down as well as best approach shot into the green without having to play multiple practice rounds.”

For Mickelson, this could all be true. But where he might lose some of the critics is when a player is going to the book a second, third and sometimes fourth time for what appears to be a straightforward putt. In one of the viral videos starring Bryson DeChambeau from last Friday at the Northern Trust, the Mad Scientist can be seen consulting the book once from behind the hole, then a second time from the same spot he was standing in before, and then taking nearly two full minutes to look at the putt without the book from the other side.

The latest viral video, which was posted on Monday night, is of Northern Trust winner Patrick Reed, who took a similar amount of time as DeChambeau for a putt during the Wyndham Championship. Reed consults the book only once, but still takes two minutes and 20 seconds to hit the putt:

Everybody all on @b_dechambeau but this was Reed at the Wyndham last week on a uphill putt. pic.twitter.com/bPdZNVLEGE

Again, each player and situation is different. Perhaps Mickelson, and Fowler, Skovron’s boss, use the books in a quick and effective manner. Other players, as we’ve seen, are more deliberate.