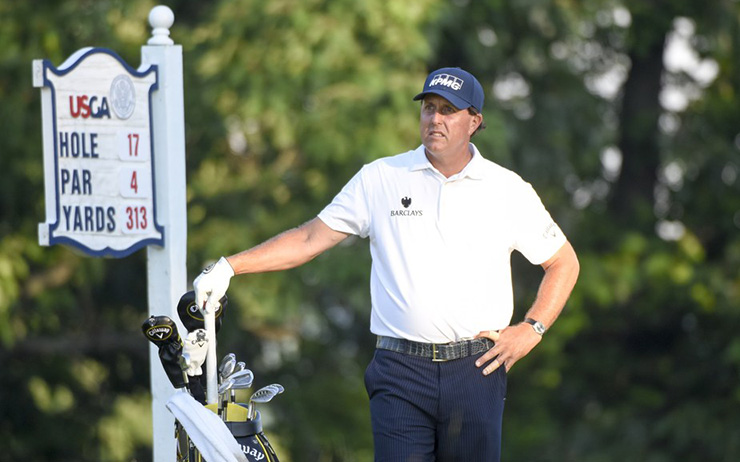 These last 18 years have flown by for Phil Mickelson, who each June celebrates another birthday, plus the birth of a daughter – and marks another year without the championship he covets the most late in his Hall of Fame career.

It all is interconnected. It has to be.

The narrative was established at the 1999 U.S. Open, when Mickelson played in the final pairing of the final round with Payne Stewart under the gauzy gray sky at Pinehurst No. 2 in Pinehurst, N.C. He was prepared to leave that championship at a moment’s notice, regardless of his score or station on the leaderboard, if his wife Amy went into labor with their first child.

The beeper he carried with him never went off. But Stewart did, one-putting the last three holes to relegate Mickelson to a runner-up finish. Then, after Stewart punched the sky, he cradled Mickelson’s face in his hands and reminded him that he wasn’t getting a consolation prize, but was about to receive the ultimate prize – fatherhood.

The first of his and Amy’s three children, Amanda, was born the next day, June 21, five days after Phil celebrated his 29th birthday.

The circle is small.

Mickelson has collected five more silver medals in the U.S. Open since that day. He has yet to win in 26 starts. And he won’t this year, not without some kind of oddly-timed miracle. The five-time major champion, winless since he won the British Open in 2013, will skip the U.S. Open in two weeks at Erin Hills in Wisconsin to attend Amanda’s high school graduation in the San Diego area. The commencement ceremony is scheduled for 10 a.m. (PDT) Thursday, the opening round of the championship. Amanda, the class president, is delivering a speech.

Mickelson, who hasn’t missed the U.S. Open since 1993, wants to be there for the child who first made Father’s Day a celebration for him, too.

“Obviously, it’s a tournament that I want to win the most, and it’s a tournament — the only way to win is if you play and have a chance,” Lefty explained after shooting an even-par 72 in the third round of the Memorial Tournament. “But this is one of those moments where you look back on life, and you just don’t want to miss it. I’ll be really glad that I was there and present.

“I’m really excited about this moment in our family’s life.”

Mickelson, 46, hasn’t officially withdrawn yet. He can delay the actual act until moments before his tee time. But he has alerted the U.S. Golf Association of his intention to do so.

“I didn’t want Mike Davis and the USGA to be caught off guard when they made their pairings for television on Wednesday, and I want the alternate to know that he most likely will be in and prepare properly,” Mickelson said. “But Mike and I both agree there’s no sense in doing it right now. You never know what might happen. Maybe something comes up with the commencement, maybe something comes up with the weather. I don’t know what will happen, but it doesn’t look very good. It would have to be something unforeseen.”

Said Mike Davis, USGA executive director: “Phil called on Saturday to let me know that, because of the timing of his daughter’s high school graduation, he would likely not be able to play in the U.S. Open at Erin Hills. We applaud and appreciate the fact that he is being pro-active so that the USGA can make any appropriate adjustments should he not be able to play. We certainly understand and support that Phil’s family commitments are of paramount importance, and hope that the timing will work in his favor.”

“I think the decision shows what kind of person Phil is, that he understands that there are more bigger things in life than golf,” Rickie Fowler said. “Yeah, it is a major, and yeah, he wants a U.S. Open, but he’s obviously making family his priority.”

“You have to compliment the guy on family values,” Matt Kuchar added. “Particularly given that the U.S. Open is the one piece missing from his trophy case, I think it’s quite a remarkable tough decision to make. It just speaks highly of what the guy is thinking.”

At first blush, this might appear to be a bad break for the snake-bit star, but the U.S. Open has been a celebration for Mickelson and his family ever since Amanda’s arrival. Two birthdays to acknowledge and the searing memory of why the national championship is such an emotional occasion, regardless of how Phil performs.

“Yeah, I go back and every year at the U.S. Open, I think back about that ’99 Open,” he said. “The birth of your child, any child, but especially your first child is the most emotional event you can ever experience and share together with your wife. And I always think about that at the U.S. Open. I think about Payne Stewart. And I can’t believe how quickly time has gone by. Here she is turning 18 and moving off to college and I’m so proud of her. She’s a special person.”

If there is any consolation, Mickelson will be missing a U.S. Open at a venue relatively unknown to all but a few participants. The young course designed by Dr. Michael Hurdzan and Golf Digest architecture editor Ron Whitten hosted the 2011 U.S. Amateur won by Kelly Kraft. Next year’s U.S. Open, however, returns to Shinnecock, where he was runner-up to Retief Goosen in 2004. Who knows. Does redemption comes after sacrifice?

Fortunately, he still has time. Well, a little.

“I’ll be able to play the next two years solidly before [daughter] Sofia gets to graduate,” he said, grinning.

The circle is small. And gets smaller every year.