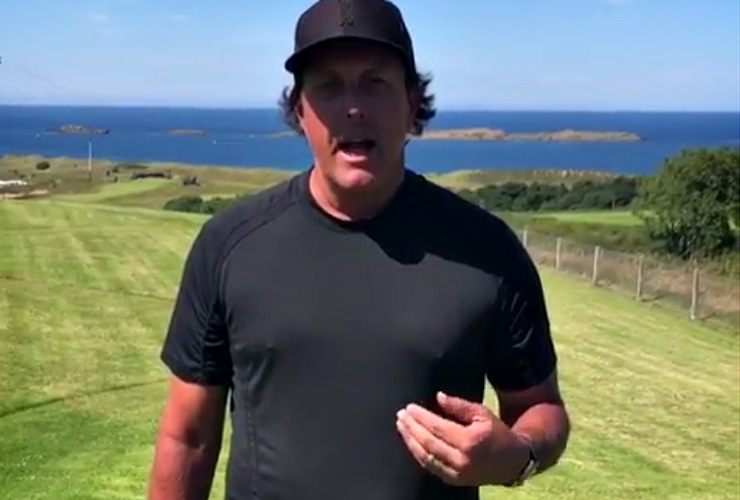 By Christopher Powers
After an impressive victory at Pebble Beach in February, Phil Mickelson appeared to be poised for a big season, particularly in the majors. Lefty is always a threat at Augusta, and with the PGA Championship at Bethpage and the U.S. Open at Pebble Beach, two courses Mickelson had good major championship history in, he had to like his chances to contend in all three.

Unfortunately, Mickelson has struggled mightily since his AT&T Pro-Am win, failing to register a single top 10 finish in 12 starts since and missing half his cuts. His best finish of T-18 did come at Augusta, but he faded at both the PGA and the U.S. Open, finishing a distant T-71 and T-52, respectively. The only area Mickelson has performed well in of late is social media, with a pair of hilarious “Phireside with Phil” chats that can be viewed on his Instagram account.

Since his most recent “Phireside” chat with his mother, Mickelson has gone radio silent on social media, which he claimed in his latest video is because “I haven’t felt good about myself and the way I’ve been playing, and so I haven’t done anything or wanted to be in public.” Smart move, as he’s missed consecutive cuts, something social media trolls would surely have latched on to had he posted something during that time.

Due to the recent struggles, the 49-year-old is going through what he calls a “hard reset,” which has included a six-day fasting period when he’s drank only water and his magical coffee creation. We’ll let him take it from here:

Let’s get real for a minute. I haven’t been my best and I’m doing all I can to get it right. I’ll have more Phireside chats soon as well as a fun new series too. Until then, HIT ?’s

Fifteen (!!) pounds (that’s 6.8kg) seems like an aggressive amount of weight to cut the week before a major (remind you of anyone?), but hey, Phil’s gonna Phil. The way he’s played lately, this hard reset could be exactly what he needs. As he closes in on 50, he knows his opportunities to win more majors will be limited. I guess that means trying anything to win another, even if it means not eating food for six days. Let’s just say that if Lefty goes on to shock the world at Royal Portrush (he’s 80/1 to win), fasting before major championships will become a hotter trend in golf than CBD.