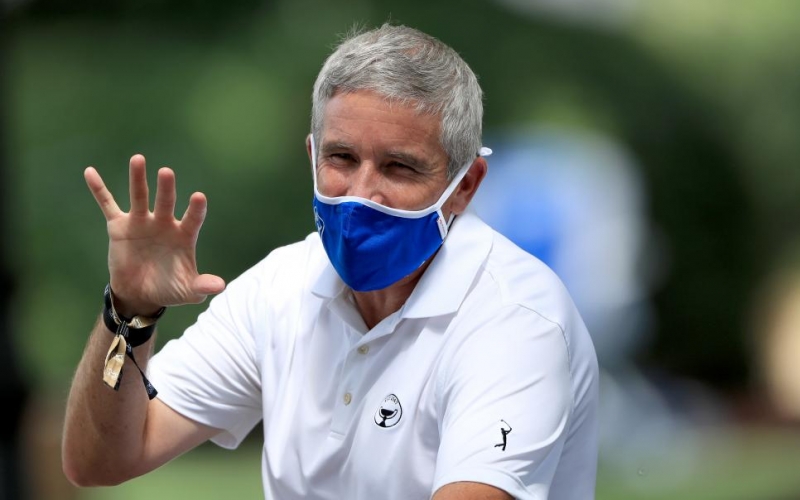 Sam Greenwood
PGA Tour commissioner Jay Monahan discussed the start of the 2021 season during a virtual roundtable on Thursday.

By Joel Beall
A return to normalcy remains in the distance, yet it’s a distance that’s now visible thanks to the beginning phases of COVID-19 vaccine distribution. Officials with the PGA Tour sees this horizon as well, understanding the ramifications it could bring to their business and the sport.

However, PGA Tour commissioner Jay Monahan, while encouraged by the developments of the medical community to combat the pandemic, is preaching patience when it comes to assimilating fans—at least in large numbers—back into the tour experience.

“It really is hard to predict at this point what that will be,” Monahan said Thursday morning, speaking at a virtual roundtable discussion. “I think you’ll just see a slow and steady increase in the number of fans that we have on-site, but again, we won’t be the sole arbiter in that. Any steps that we take we’ll be doing in concert with our partners in the local communities where we play.”

The effort to reintroduce galleries at tour events has already started, with the Bermuda Championship and Vivint Houston Open allowing a limited number of fans onto tournament sites. But spectators will be almost non-existent on the West Coast Swing, with most tournaments limiting attendance to VIPs. The Waste Management Phoenix Open is the outlier, as tournament officials are planning on 8,000 fans per day.

“Obviously there’s just a great deal of uncertainty as we go into 2021, and that’s directly connected to COVID,” Monahan said. “I think a lot of businesses right now, given the uncertainty, you’ve really got to be focused on executing the business, and really, to me, the challenge is the opportunity because our sport right now, there’s such momentum behind our sport.”

Monahan said the tour operates in six-to-eight week windows, which is why plans have not been released for the Florida part of the schedule come March. Still, Monahan said the aspiration is to continue the path the tour is on, which includes playing pro-ams and hosting corporate hospitality at tournaments.

“The way I look at it is that we’re on this path to getting back to normalcy, and each one of these steps is really positive,” Monahan said. “When I talk to our players, those steps are noticeable to them, and they’ve fully embraced it, all the while taking the responsibilities associated with the health and safety protocols very, very seriously.”

The vaccination, or lack thereof, could be a challenge facing the tour in 2021. Monahan said he will not be mandating players or those who attend tournaments get vaccinated for COVID-19. More important to him is how the phases of vaccination are executed across the country, as that will help the tour understand how to operate its health and safety protocols and how they may apply to having fans on tournament properties.

“I think vaccination is a choice, and we’re going to do—I think we would apply the same logic and the same amount of care to that subject as we have to every other subject, and that is to try and do our best to educate our members on vaccination and the pros and cons associated with it,” Monahan said. “But ultimately it’s an individual decision.”

RELATED: What’s the status of the men’s majors/Ryderr Cup heading into 2021?

Other news from the roundtable included the Memorial Tournament signing a 10-year title sponsorship with Workday, plans for a San Francisco tour event are likely on hold for the foreseeable future, and that the WGC-Mexico Championship, slated for Feb. 25-28 in Mexico City, is up in the air.