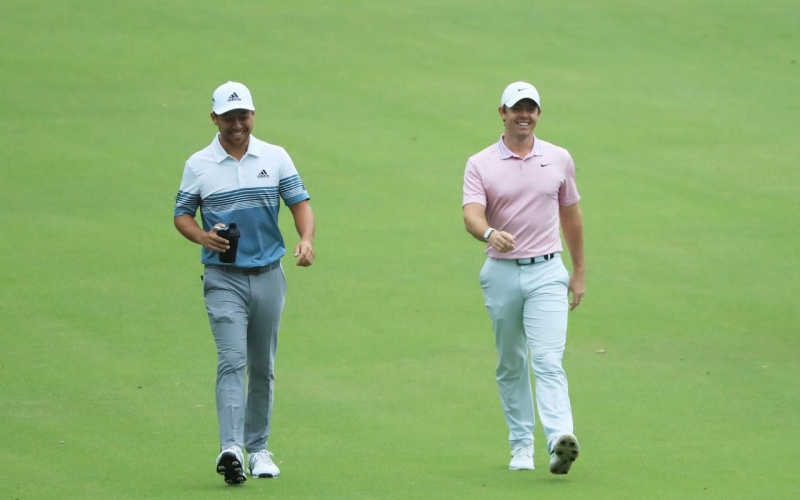 By John Huggan
NORTH BERWICK, Scotland — In golf, not all bubbles look the same or feel the same. Certainly, the contrast between the protocols in place on either side of the Atlantic is more than marked. Or it is in the minds of at least some players. Recently described as a “free for all” by one prominent professional, the system in place on the PGA Tour is noticeably more lenient than that in place on the European circuit. “It’s like comparing a holiday camp with a prison camp,” says one of the more hyperbolic members of the professional golf community.

Hang on though. The reality on both sides of the pond is that neither of those two extreme views is true. Yes, the European Tour system is more strict. But making a trans-Atlantic adjustment is far from difficult, if the prevailing mood at this week’s Scottish Open is anything to go by. Most players are simply keeping their heads down and getting on with things.

“When you do make a trip over here and you have to stay in a bubble, it’s different,” acknowledged former PGA champion Collin Morikawa. “It’s one everyone has to make, especially the U.S. guys. It’s something we haven’t been used to over the past few months. It’s tough when you are stuck inside a bubble. You can just lose your mind sometimes. You have so much time away from the golf course that sometimes you’re just sitting in the room trying to figure out what to do. That’s kind of the hardest part sometimes, especially when you see 32,000 people out there [as will be the case at next week’s Open Championship] when you have to eat your food and go back to your room. But do I feel safe out there? Absolutely.”

Even more philosophical is Xander Schauffele. Thinking ahead, he arrived in Scotland with some reading material.

“It is different, over here?” said the World No. 5. “It’s definitely a tight-knit bubble. But I brought a few extra books to read. So I’ve been taking the downtime as a positive. My caddie is with me, and he’s a good friend. We can just hang out and do what we’re not able to normally do on the PGA Tour.”

Doubling down on the philosophical front, Will Zalatoris is another nephew of Uncle Sam looking on the bright side of bubble life, European Tour-style. “It is definitely a lot tighter,” said this year’s Masters runner-up. “But everyone’s got to deal with it. But it is a little weird. I was watching soccer last night and there were 60,000 fans at Wembley, was a little weird. But it is what it is. Everyone’s got to do it. I don’t mind. I’m staying with my caddie and agent. We thankfully spend a lot of time with each other to begin with, so there’s a lot of brotherly love in the house.”

A family theme also formed part of U.S. Open champion Jon Rahm’s response to the restrictions in place this week. Like Rory McIlroy, he is here without his wife and child, the fact that they would have to quarantine after entering the U.K. judged more trouble than it was worth.

“You can argue or complain as much as you want, it’s not going to change,” Rahm said. “I do feel like a lot of the family and player team restrictions are a little too much. If you want family to be here, it is more difficult. But again, those are the rules. We just have to deal with it and follow them. But I understand why they want us to stay at home and why they want us to keep us as safe as possible. It doesn’t change my time here that much. Usually at a major championship, I’ll be staying in a house. So I go to the golf course and come back to the house. I’m not out sightseeing or anything else. In that sense, this week and next haven’t changed.”

Some perspective. Life at the Scottish Open really isn’t all that bad for the star names. Not this week anyway. For the 23 members of the world’s top 60 in attendance, the day-to-day existence isn’t too shabby. Most are staying on-site, either in the palatial clubhouse facilities or in one of the houses that sit hard by some of the fairways on the Tom Doak design.

“This is actually a wonderful venue,” McIlroy said. “Everything is so easy. I’m staying in the clubhouse this week and the gym’s right here and so are the practice facilities. With one eye towards next week, this is great place to work on your game and play.”

See? It’s really not that bad.