A PGA Championship in the Northeast in May? We took Bethpage Black for a test run 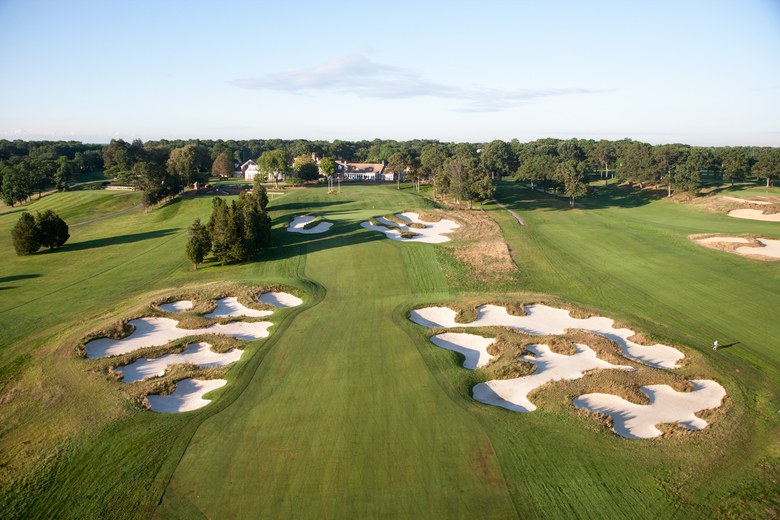 By Ron Whitten
As the PGA of America ponders the decision on whether to move its major championship from August to May, we wondered how such a decision would affect the tournament’s golf courses, particularly those in the Northeast that have been PGA Championship sites or are scheduled to host in the future. Is May too early to properly prepare a course after difficult winters at places like Bethpage Black in Farmingdale, N.Y. (2019 PGA site), Trump National Bedminster in New Jersey (2022) and Oak Hill in Rochester, N.Y. (2023)?

To see how Bethpage Black might hold up, I headed to the course on May 19, paid the $135 green fee, got paired with three locals and teed off at 7:50 a.m.

My first impression of the Black was that the freshly mowed fairway at No. 1 seemed surprisingly narrow. Clearly, the fairway dimensions established at its first major, the 2002 U.S. Open, have been retained.

The place was wall-to-wall green. Trees were fully leafed. The primary roughs, a hodgepodge of bluegrasses, ryegrasses, fescues and even a bit of Poa annua, were densely green, if a bit clumpy: shoe-top deep at one spot, ankle deep at another. Attribute that to different growth rates of the varieties of grasses. One sweep by a rough mower, and everything would be a uniform depth.

The far roughs of tall fescues were still immature on this spring morning. They won’t become tall, wispy, golden waves of grain until July or August. The only color contrast in the rough were accents of straw-colored Broom Sedge, knee-high and taller, in random spots around some bunkers. A park horticulturalist propagates new tufts that are transplanted in patches to provide the Black with some additional rustic look.

The fairway turf was quite good. A ryegrass/Poa annua mix, it was mowed tighter than expected, providing some extra roll, but not so tight as to make any lie feel uncomfortable.

The greens, mostly Poa annua, were pleasantly firm. A well-struck iron would bounce, then grip; recoveries from surrounding tall rough were tough to get close. Though the greens were not of championship pace, they certainly rolled fast and true, probably 10 on a Stimpmeter.

The Poa annua greens alone would seem reason enough to welcome a May date over August for the PGA Championship. Poa is notorious for dying in the heat and humidity commonly found across America in August. The temperature on a normal May afternoon at Bethpage is in the mid-70s, perfect weather for golf, but the day before my round, the temperature in New York City hit a record high of 91 degrees. At the time we finished play on the Black at 12:30 that Friday, the thermometer was at 89, and the humidity was clearly above 50 percent. Crews were busy spraying mist on the back-nine greens.

After my round, I spoke with Andy Wilson, Bethpage’s director of agronomy, who oversees all the courses at the state-park facility. (Mike Hadley, the superintendent assigned to the Black, works under Wilson’s supervision.) I told Wilson the course seemed tournament-ready that day, except that the sand in the bunkers was incredibly fluffy, resulting in many buried lies for our foursome. Wilson explained that the crew had rebuilt all greenside bunkers last winter, installing a Better Billy Bunker drainage system to keep sand from eroding down faces after heavy rains. (Workers had done the same to all fairway bunkers the previous winter.) They had just completed the process of installing new silica sand in all the greenside bunkers two weeks before. It will take time for the sand to settle. They’ll water and hand-pack the sand as time permits to achieve the desired firmness. This was all done in preparation for the 2019 PGA; by then, buried bunker lies should be rare.

We discussed the logistics of a major in May versus August. “Agronomically, May is probably a slight advantage over August,” Wilson said. “Certainly, Poa annua greens are much easier to manage in May. Also, we don’t have the weed pressure in May that we have in August.”

But there’s still the specter of a late winter that could postpone growth of grass until late spring. Wilson dug through past weather records. The last full winter snow cover on Long Island was 1996; it lasted until early April, which would still provide approximately six weeks to prepare the turf. Frost is rarely an issue at Bethpage in May, although it can be chilly some May mornings.

Seasonal labor could be an issue at some courses, Wilson conceded, but most of his seasonal interns are turfgrass students from Rutgers University and Penn State, both of which dismiss students by early May. Volunteer labor, mostly superintendents from other courses, would likely take time off from work in either month. Available spectator parking might be an issue in spring versus summer, but that’s not Wilson’s area of expertise.

A possible PGA move to May would allow Trinity Forest in Dallas and other courses in warmer-weather areas to potentially host the championship.

I don’t see many Northern venues jeopardized by a May date—Oak Hill in Rochester has somewhat similar weather as Bethpage—but such a move could add Southern locales to the mix. Southern Hills in Tulsa, recently announced as a PGA site, the year to be announced, would definitely benefit—May can still be hot but not as reliably steamy as August. Same with previous PGA hosts Atlanta Athletic Club in Georgia and Shoal Creek in Birmingham, Ala. The new Trinity Forest in Dallas could become a contender. (The last PGA in Dallas was in August 1963.) Champions Golf Club in Houston, site of the 1969 U.S. Open, could be another possibility. Even a tropical Florida course like the Blue Monster at Trump Doral could get consideration. (The last PGA Championship in Florida was at PGA National in Palm Beach Gardens in 1987; when the PGA was played at the original PGA National, now BallenIsles, the championship was moved to February 1971.)

Among Southern venues, where escape from intense August heat would likely be appreciated by players and spectators, the concern would be whether the predominant turfgrasses—Bermuda and Zoysia—would have sufficient warm weather in which to fully grow. Another concern might be the transition from winter over-seeding to summer turf, which normally occurs in April and May, resulting in splotchy fairways for a few weeks as winter turf dies off and awakened Bermuda overtakes it. The simple solution, of course, would be to forgo over-seeding for the winter before a PGA Championship.

Bethpage’s Wilson is stoic about the date for the 2019 PGA. He helped prepare Bethpage Black for the U.S. Open in June 2002 and June 2009, the latter a dreadfully rainy week, as well as for The Barclays PGA Tour event last August. He has always anticipated that the 2024 Ryder Cup at Bethpage would be in late September, although that might change if the golf schedule changes to avoid a TV-ratings conflict with football.

Based on one unscientific, single-round examination of Bethpage Black, we can expect that Wilson, Hadley and crew will have the course in championship condition should the tournament move to May 2019.