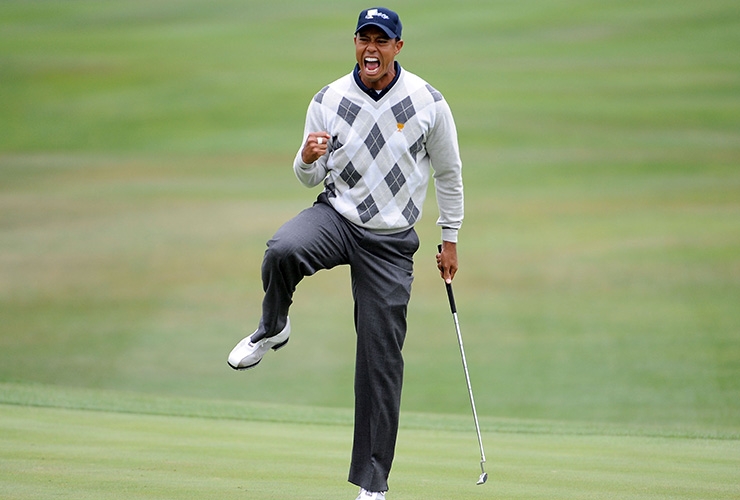 By Daniel Rapaport
Perhaps more than any other golfer in history, Tiger Woods has done a large portion of his winning at specific tournaments, on specific golf courses. Woods has never played as much as the average PGA Tour pro, instead crafting his schedule around courses that suit his eye. A remarkable 40 of his record-tying 82 career PGA Tour victories have come at just six different events.

Unlike any of the aforementioned courses, TPC Harding Park was never an annual host of a PGA Tour event during Woods’ career. Only twice has Tiger played the San Francisco public course in competition: the 2005 WGC-American Express Championship and the 2009 Presidents Cup. (He missed the 2015 WGC-Match Play at Harding Park due to injury). His results in those two competitions, however, suggest an inchoate love affair.

Woods won the Amex in 2005, beating John Daly in a clash of high-powered golfers that ended with a thud in a playoff. Four years later at the Presidents Cup, Woods went 5-0-0, his best career showing in any team event, as the Americans made easy work of the Internationals, beating them 19½-14½.

Woods enters this week’s 102nd PGA Championship as something of an enigma. The 44-year-old has played just three PGA Tour events in 2020 and just one since February. He has looked good at times and shaky at others. And the back, of course, will always be a concern moving forward. But Woods’ fond memories at Harding Park should serve as a confidence booster heading into golf’s first major championship in nearly 13 months. And past experience might offer a preview of what to expect from Woods in the next few days.

So let’s relive each of those starts and ruminate on what, if anything, they mean going into this week’s PGA Championship.

This marked the return of the world’s top professionals to a course that had hosted a tour event during the 1950s and 1960s before falling into disrepair. The course had deteriorated so steeply by the 1990s that it was used for parking during the 1998 U.S. Open at nearby Olympic Club. During Woods’ junior golf days in Southern California and his two years going to college at Stanford, about 30 miles southeast of San Francisco, playing Harding Park was an afterthought. 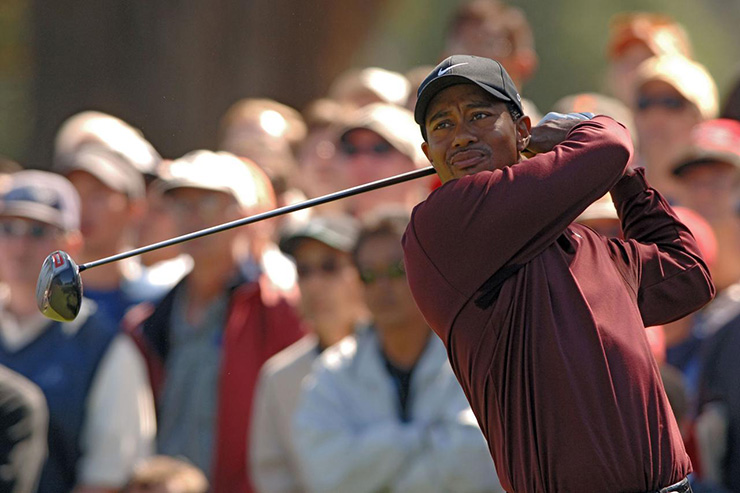 However, a significant increase in funding led to a renovation that was completed in 2003, and the tour came to the Bay Area in October 2005 for the WGC event. Woods was 29, sporting a goatee and squarely in his prime—he’d won the Masters that April for the fourth time in his career, finished second in the U.S. Open at Pinehurst in June, won the Open Championship at St. Andrews in July, finished T-4 at the PGA at Baltusrol and won a WGC in August. As was always the case back in those days, Woods entered the week as a prohibitive favourite.

And what was also often the case in those days, Woods found a way to contend in a big event despite not hitting many fairways along the way. In none of the four rounds did he hit more than six fairways and all told he found the short grass only 22 of 56 times for the week. However, his length advantage-—he finished second on tour that year in driving distance—still allowed him to gain 2.63 shots off the tee for the week.

“They tend to get the rough up, because of the conditions there, it’s always going to be overcasty, cool and perfect conditions for the rough to get really thick … they can make that golf course brutally hard.”

Despite playing out of that thick rough for much of the week, Woods found his way into contention on the back nine on Sunday. Trailing by three as he made the turn, Woods ran off three straight birdies at Nos. 10, 11 and 12 to tie Daly at the top. Then, just as Woods was making a bogey at the par-4 14th, Daly chipped in for birdie from right of the 13th green to take a two-shot lead down the stretch. Woods, however, would play his final four holes in one under, which was good enough to get into a playoff thanks to a bogey from Daly on 17. 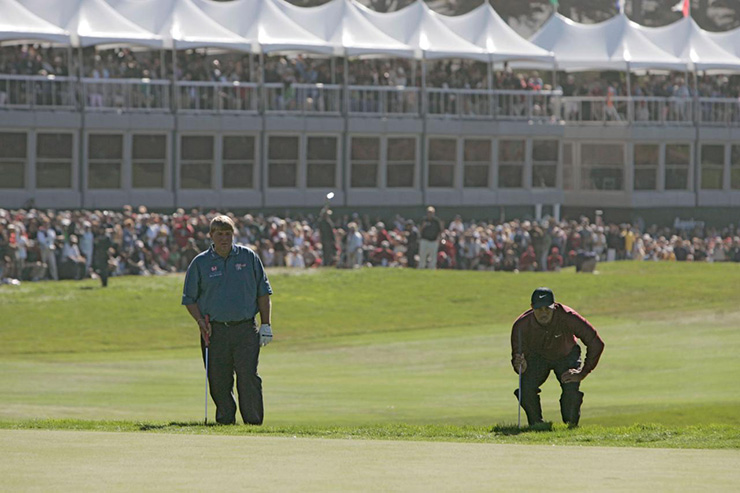 Harding Park’s coming-out party after its restoration became even bigger when the 2005 WGC-AMEX came down to a playoff between Daly and Woods. (Photo by Stan Badz)

Woods and Daly headed back to the 18th tee and walloped majestic, 340-plus-yard drives down the centre, Daly’s scooting about 10 yards farther. Both men then hit their wedge approaches short of the flag, and both made par. They then went to the drivable 16th. True to form, Woods played conservatively with an iron, while Daly ripped driver well right into trees. Both players found the middle of the green with their seconds. Woods played first and just missed his birdie effort, leaving Daly a 20-footer for the victory.

Daly slid his winning effort just left of the hole, leaving a three-footer to keep things going. He then pulled the par putt, the ball catching the left lip but failing to fall. Quickly and shockingly, Woods had won his ninth career WGC title.

“It just felt so bad,” Woods said of the manner of victory. Not the victory itself, of course. “I felt terrible for JD. You don’t want to win tournaments like that.”

Woods’ comments after the win were a madlibs for how he won so many tournaments in his prime: “I didn’t really have my best stuff this week, but I still hung in there with my mind and putted beautifully and hit good shots when I really had to.”

Tiger’s second trip to Harding Park came at the tail end of 2009, which had been another impressive season for Woods. Or, as impressive as a season could be without winning a major championship. Woods won six times on tour that season but suffered a shocking upset at the PGA Championship in August, when failed to close out a 54-hole lead in a major for the first time, losing to unheralded Y.E. Yang. 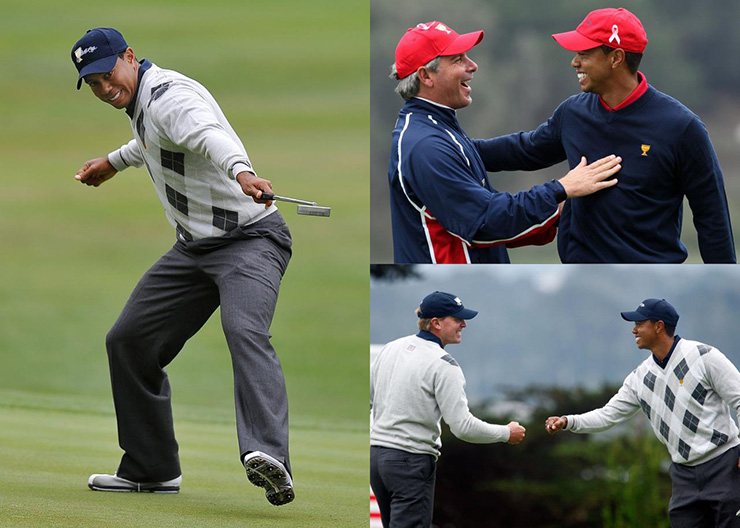 Tiger went 5-0 for Team USA at the 2009 Presidents Cup, making captain Fred Couples proud as he teamed perfectly with Steve Stricker while recording his best performance in a team event in his career. (Photo by David Cannon)

“Playing with Stricks there, in the Presidents Cup, we had this deal where we kind of worked out that for the first eight out of nine holes, maybe eight out of 10 holes, he’d be putting … if I hit my irons well.

They smashed Geoff Ogilvy and an 18-year-old Ryo Ishikawa, 6 and 4, in Thursday’s foursomes, then beat Ogilvy and reigning Masters champion Angel Cabrera, 5 and 3, in Friday’s four-ball.

RELATED: Majors played at munys are something special long after the last putt drops

During Saturday morning foursomes, Woods and Stricker faced their toughest test in Tim Clark and Mike Weir. The match was all square heading into 18, where Woods produced an all-time Tiger highlight, hitting a perfect 3-iron and club twirling the crap out of it as he strutted toward the green. Weir and Clark made a mess of the hole, and Stricker’s putt was eventually conceded. Their afternoon victory lacked such dramatics, a 4-and-2 triumph over Ishikawa and Yang.

On Sunday, Couples threw Tiger a bone by pairing him against Yang, who had poked a hole in Woods’ previously impenetrable Sunday-at-a-major armour. Woods showed no mercy, winning 6 and 5 and holing the putt that clinched the Cup.

“I had an amazing feel that week for my iron game,” Woods said. “I kept hitting every ball inside 15, 20 feet. Doesn’t matter where [Stricker] put me. I was gonna figure out how to get it inside 15, 20 feet. And he’d bury it. We just had so much fun.”

What, then should we make of Woods’ rather successful, albeit brief, history at Harding Park? Of course, we can’t extrapolate too much from two golf tournaments, both more than a decade ago, and one a match-play, team competition.

However, the style of play that won him the Amex isn’t likely to get it done if he wants to win his fifth Wanamaker Trophy. Woods will need to find the short grass off the tee at Harding Park more often if he’s going to be a factor. The rough wasn’t quite Palm Springs-easy back in 2005, but it should be much more penal for the PGA. Nor is Woods quite as strong as he used to be, so he can’t control the clubface coming out of the rough as well as he could back in the mid-2000s. Last year at Bethpage Black, his inability to hit fairways wound up in a missed cut. If he struggles similarly this week, it will be a slog.

Still, when there’s as much uncertainty as there is surrounding Woods this week—his lack of play, his back, his putting—any positive vibes are a welcomed plus. Having good memories at a course is always better than having bad memories at a course. If Woods can summon another sparkling performance in the Bay Area, perhaps Bay Hill and Torrey Pines and Firestone will have to make room at the Tiger table for TPC Harding Park