PGA Championship 2019: Tiger Woods and Phil Mickelson together at Bethpage for practice rounds 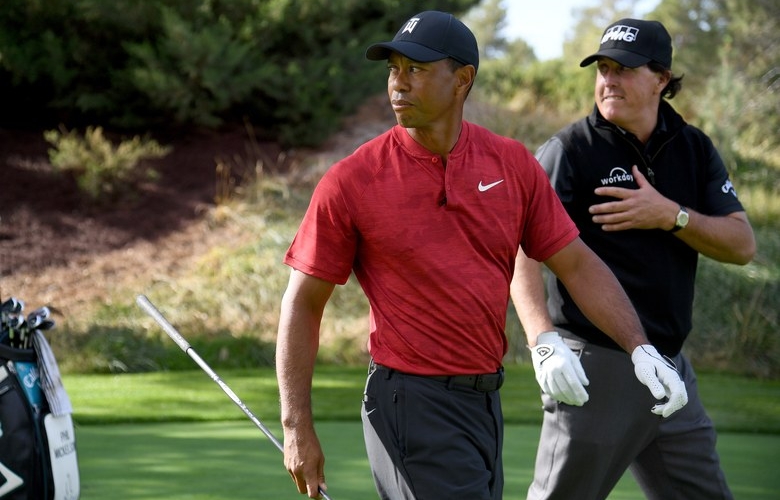 Harry How/Getty Images for The Match

By Joel Beall
Tiger Woods and Phil Mickelson stole the show in Bethpage Black’s major debut at the 2002 U.S. Open. On Wednesday, the two icons toured the venerable Long Island property to see the test that awaits at next week’s PGA Championship.

Pictures surfaced on Instagram and Twitter of Woods and Mickelson, both former PGA champions, making their way around Bethpage Black. Though a video capturing the two together was ultimately deleted, others of Mickelson and Woods playing separately remained up as of Wednesday evening:

#Phil #Tiger #tigerwoods #philmickelson #pga #bethpage #bethpageblack 2 of the GREATEST, just out for a Wednesday afternoon round of golf.

Tiger Woods has been spotted already getting in some practice at Bethpage Black ahead of next week’s PGA Championship. ? (?:@putt_for_show)

Per my sources, the Masters champ is at Bethpage and looking GOOD. Stuck both shots on the long par three 3rd, one to 7 feet. Grand slam alert @FrankieDeLuca_ pic.twitter.com/LxeZSL38nK

Despite starting the final round five shots back of Woods at the 2002 U.S. Open, Mickelson—playing in the group ahead of Tiger—made a Sunday charge, at one point narrowing the deficit to two with a birdie on the 13th hole. However, Woods answered with a birdie of his own at the 13th, and bogeys at the 16th and 17th by Mickelson gave enough breathing room for Woods to win by three.

The sometimes-icy relationship between Woods and Mickelson has thawed over the last few years. They famously played together during a practice round at the 2018 Masters, and appeared in a made-for-TV match over Thanksgiving weekend that fall.

The PGA Championship begins on May 16.