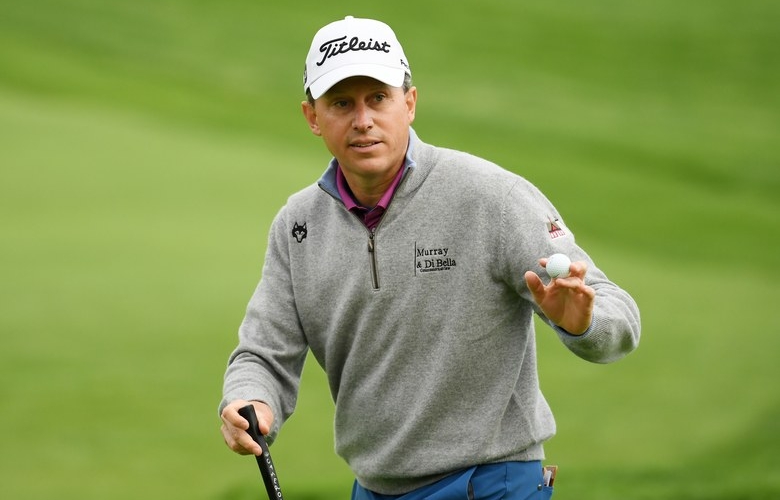 Club Pro Jason Caron of the United States reacts to his putt on the first green during the first round of the 2019 PGA Championship at the Bethpage Black course on May 16, 2019 in Farmingdale, New York. (Photo by Ross Kinnaird/Getty Images)

The 46-year-old head professional at Mill River Club on Long Island played two full seasons on the PGA Tour (2000, 2003) and six seasons on the then-Nationwide Tour. His history at Bethpage Black, though, is why Caron—who opened with an even-par 70 on Thursday, lowest among club pros in the morning wave—feels so at home.

Caron finished T-30 in the 2002 U.S. Open at Bethpage and credits his 30-plus rounds on the Black course to his success on Thursday. Walking up to the 18th green after a PGA of America official announced each player, despite playing with two tour pros (Byeong Hun-an and Andrew Putnam), Caron had the loudest support from a group of members and friends who came out to follow him.

Among his supporters was Caron’s wife, his assistant at Mill River, and quite the player herself. Liz Janangelo Caron was a four-time All-American at Duke and the 2004 NCAA player of the year before playing two seasons on the LPGA Tour. Caron credits, in part, a tip from his wife that resulted in his T-4 finish at the PGA Professional Championship last month, to earn the spot at Bethpage.

“I feel like you guys should interview her,” Caron told the assembled media after his first round. “It was about a year or so ago, and she told me to keep my hands a little out in front of me. I’m not sure I’m still doing it, but it feels like it anyway.”

That tip got him here, rubbing elbows with a bunch of PGA Tour players who he used to compete against on a weekly basis. Caron played a practice round with Lucas Glover, the 2009 U.S. Open champ here, and Jason Dufner earlier in the week. And as he’s made his way around the grounds at Bethpage, just 10 miles down the road from Mill River, he’s bumped into tour veterans like Steve Stricker and Zach Johnson, who greeted him.

With his old caddie, Brent Carlson, on his bag, there’s no doubt it feels like old times. Carlson, who they call “Shakes,” caddied for Caron on tour in 2004 and 2005. As the duo have made their way around Bethpage all week, players have commented on “The Dream Team” being back together, Carlson said.

“It’s awesome—it’s just amazing to be here with Jason and see him play so well,” Carlson said. “It’s really like old times.”

As Caron walked out of the scoring tent Thursday, he saw Carlson surrounded by media and told him jokingly: “What are you, a celebrity, Shakes?”

For Thursday at Bethpage, Caron was the one who was a big deal once again. And it’s clear he’s very much back in comfortable surrounds inside the ropes. This isn’t a typical club pro—with $667,364 in Web.com Tour earnings to his credit, major championship experience and the support of his local Long Island crowd—Caron will enter Friday with the belief he belongs among this field of players.

“If I can just go out there and not think about the consequences, everything will work its way out,” he said. “I’m comfortable with my surroundings. The sightlines are different because we play it so far back than we’d normally play. But I hit a lot of greens, I think it was 13, which is what you have to do to play well around here.”