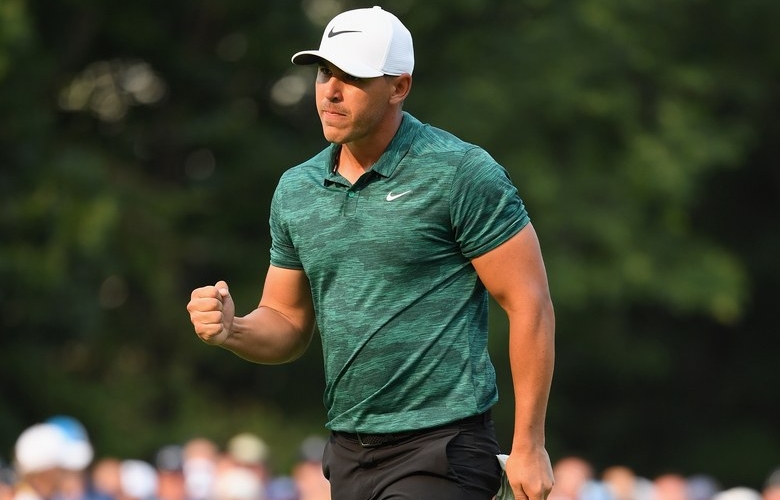 Ross Kinnaird
ST LOUIS, MO – AUGUST 12: Brooks Koepka of the United States reacts after making a putt for birdie on the 16th green during the final round of the 2018 PGA Championship at Bellerive Country Club on August 12, 2018 in St Louis, Missouri. (Photo by Ross Kinnaird/Getty Images)

By Christopher Powers
As Bellerive shook with every Tiger Woods birdie on Sunday at the PGA Championship, Brooks Koepka never wavered, muscling his way around the golf course as only he can en route to a final-round four-under 66. That was enough for a two-shot victory, giving him his third career major title, all in his last six major championships starts.

It wasn’t smooth sailing at first, even after Koepka birdied the opening hole following another mammoth, 326-yard tee shot that set up a flip wedge and an eight-foot putt. Three holes later, he made bogey at the fourth, three-putting from 63 feet. He followed with another bogey at the fifth, opening the door for the rest of the field, including Woods, who went on to card his lowest final round in a major in his career, a six-under 64 that eventually earned him a solo second finish.

But Koepka immediately got back on track, making par at the par-3 sixth and then three straight birdies to close out his back nine and regain the lead. At the turn, Adam Scott, who played alongside Koepka in the final pairing, began his charge, applying pressure to the leader and eventually tying him at 14 under at the 13th hole with his third birdie on the back nine. With multiple chances to add to his lead, Scott’s putter went cold, and he made four straight pars before a bogey on the last hole for a closing 67.

Once again, Koepka went on another run, overpowering the final four holes with birdies at 15 and 16, the latter coming after hitting a pure, cut 4-iron on the par 3 that rolled to six feet, effectively ending the chances of Scott or Woods catching him. Pars at 17 and 18 were all he needed for his second major of the year after his win at the U.S. Open in June.

The win puts Koepka in some elite company. He joins Woods, Jack Nicklaus, Tom Watson and Jordan Spieth as the only players to win three majors before the age of 29. He also became just the fifth player to win the U.S. Open and the PGA Championship in the same season, joining Gene Sarazen, Ben Hogan, Jack Nicklaus and Woods.